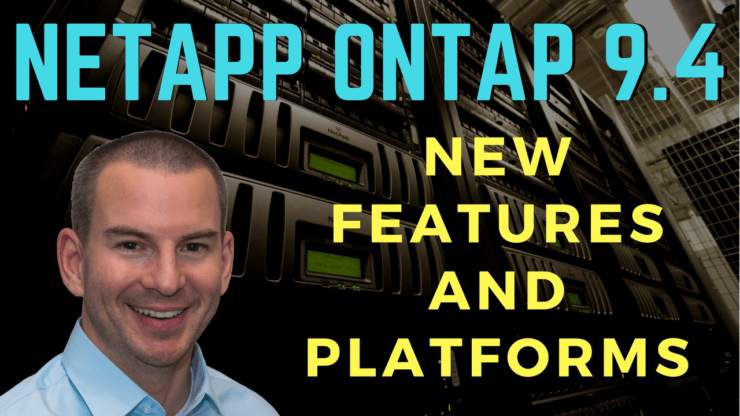 The new NetApp ONTAP 9.4 operating system for their FAS and AFF storage platforms has just been announced.

The traditional SATA and SAS architectures were designed to handle spinning disks and can become a bottleneck when SSDs are used. NVMe (Non Volatile Memory Express) provides higher performance designed for flash storage. It uses its own command set (with support for parallelism and less overhead than SCSI) over the faster PCIe bus.

That changes with the AFF A800 platform – it has 48 internal NVMe SSD drive bays. The system can be ordered with either 24, 36 or 48 drives for both High Availability and MetroCluster over IP configurations. 1.9TB, 3.8TB and 7.6TB drives are available now, with 15.3TB drives expected soon.

The new entry level AFF A220 and FAS2700 platforms continue to use the SAS architecture to disk.

NVMeOF (NVMe Over Fabrics) allows the NVMe command set to be used for block access over a network, providing lower latency over the wire than traditional block access protocols. The NVMeOF standards support RDMA (InfiniBand, RoCE and iWarp) and Fibre Channel networks.

NVMeOF is introduced to ONTAP in version 9.4 which supports NVMeOF over Fibre Channel only (FC-NVME) but Ethernet support is also part of NetApp’s future vision.

Existing AFF systems with Fibre Channel ports will support NVMeOF with a software only upgrade to NetApp ONTAP 9.4. This will provide NVMeOF over the network to the storage system and SAS connections to the disks in the back end.

The new AFF A800 has NVMe connected disks and offers end-to-end NVMe.

Industry Leading Performance on the AFF A800

The AFF A800 offers blistering performance as the industry’s first enterprise all flash system with end-to-end NVMe support. (As part of the ONTAP portfolio it also supports Fibre Channel, iSCSI and FCoE SAN, and NFS and CIFS/SMB NAS.)

Sub-200μs latency, over a million IOPS and 34GB/sec throughput are achievable for an HA pair using end-to-end NVMe. 25GBps throughput is achievable when using NFS.

The system can scale up to a 24 node cluster providing up to 11.4M IOPs and over 300 GBps throughput.

SSDs for NetApp systems fit either the NVMe or SAS drive bays, they are not compatible with each other.

The A800 features 4 onboard 100GbE ports, and expansion slots which include support for 32GB FC.

NVRAM has been moved to the memory bus through the use of NVDIMMs, lowering write latency.

The new entry level platforms provide around 30% better performance than their predecessors in the previous hardware release. The AFF A800 and FAS2700 platforms come in a 2U chassis with two HA controllers and 24 disk slots.

The FAS2700 series consists of the FAS2750 with 24 drives from the factory, and the FAS2720 with 12. Up to 24 nodes are supported in a cluster when NAS only protocols are used, up to 12 when using SAN protocols or a combination of both.

‘Virtual’ Storage Tiering has been available in ONTAP for some time through the use of Flash Cache and Flash Pool. These are caching technologies rather than what would typically be called storage tiering though.

‘Real’ storage tiering was introduced with FabricPool in ONTAP 9.2. FabricPool aggregates contain a performance tier for hot data on SSD, and a capacity tier on less expensive cloud based object storage.

ONTAP 9.4 allows an ‘Auto’ tiering policy to be set at the volume level which offloads cold data to the capacity tier. ‘Cold data’ is defined as blocks which have been inactive for a configurable time period of 2 to 63 days, with the default setting being 31 days.

Support has been extended to Microsoft Azure in addition to AWS and private cloud deployments through the use of NetApp StorageGRID Webscale. FabricPool is also now supported across the entire ONTAP portfolio including ONTAP Select.

Compaction, deduplication and compression are enabled along with configurable defragmentation thresholds for the capacity tier to provide space efficiency and reclamation.

Traditional disks offer comparatively good performance for sequential reads so it is best to keep the limited space in your performance tier for random operations. FabricPool data movements are optimised bearing this in mind. When cold blocks are accessed through random reads they are considered hot again and are moved back to the performance tier, but when they are accessed through sequential reads or backup operations they remain as cold blocks in the capacity tier.

Inactive Data Reporting is now available which shows the amount of data which is tiered to the capacity tier. This can be viewed on aggregates which already have FabricPool enabled, and on other aggregates so you can see whether they are good candidates for the feature.

The Object Store Profiler report shows latency and throughput of the cloud object storage so you can verify the potential performance impact on cold data before enabling FabricPool.

Volume level deduplication was supported in previous versions of ONTAP, enabling space savings when duplicate blocks were found within the same volume, but not across the wider storage system. Aggregate inline deduplication was introduced with ONTAP 9.3 and now ONTAP 9.4 adds the capability to perform aggregate post process deduplication. This enables you to achieve the space savings while maintaining greater flexibility by spreading data across multiple volumes.

The Secure Purge feature allow user data to be deleted cryptographically (which supports GDPR requirements) and single files can be shredded within encrypted volumes.

The Onboard Key Manager cryptographically protects disks to guard against data theft, but what if the entire system is stolen? Protected Controller Reboot provides this level of protection by requiring a passphrase to be entered to unlock the drives after a reboot. It is also possible to require a physical USB drive to be inserted in the system on reboot.

NetApp ONTAP systems will now check that the OS image has a valid digital signature before allowing it to be loaded or upgraded to. This prevents the use of a potentially maliciously hacked image or one which is not yet supported in production.

Other New Features and Enhancements

30TB SAS attached SSDs are now available. This allows an AFF A700 HA pair in a 4U chassis to provide over 2.5PiB of usable space when storage efficiency technologies such as deduplication and compression are taken into account.

SMB Multichannel support in NetApp ONTAP 9.4 allows SMB sessions to run over multiple TCP/IP connections, spreading the load over multiple CPU cores and providing more efficient use of NICs. NetApp have seen up to 90% performance improvement for SQL database workloads on their high end platforms.

The ever-increasing amount of RAM provided with the storage system has led to a problem of the node root volumes having to be very large in case they need to accommodate core files. Starting from ONTAP 9.4 new platforms will now store core files on the boot media instead, meaning the node root volumes can be smaller which frees up disk space for production workloads.

Drives need to be zeroed before use which took time in previous versions of ONTAP. The new Fast Drive Zeroing feature available on systems shipped with NetApp ONTAP 9.4 makes them available for use instantaneously, regardless of the drive capacity or type.

Upgrades can now be performed with one click from the System Manager GUI. You can point to a new ONTAP image stored on your laptop rather than on an external web server.

Features which were previously only supported on FlexVols have now been added to FlexGroups. Fpolicy and audit capability has been added, along with QoS minimums (not just maximums) and Adaptive QoS.