In this NetApp training tutorial, I will explain how Flash Pool aggregates on NetApp ONTAP storage systems work. Flash Pool is a NetApp VST (Virtual Storage Tier) caching technology. Scroll down for the video and also text tutorial. 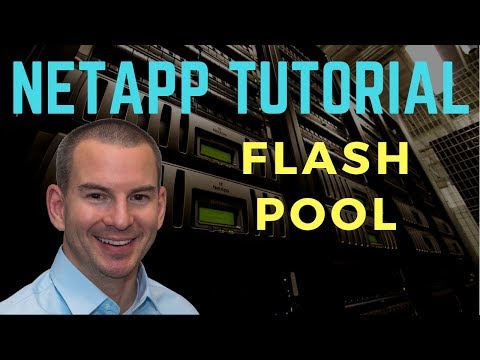 This post is the final part of a three part series where I explain how NetApp FAS storage systems handle reads and writes. You can read the previous parts by clicking on the links below:

Part One: NetApp WAFL, NVRAM and the System Memory Cache

A Flash Pool aggregate is made up of traditional HDD spinning disk hard drives, which are fronted by a cache of SSD drives to improve performance.

In the diagram below we have an existing aggregate which is made up of HDDs.

We can convert that to a Flash Pool aggregate by adding SSDs to it.

The SSDs don’t increase the usable capacity of that aggregate. They are used purely as a cache to improve performance.

Random reads from the aggregate will be cached in the SSDs as this gives large performance gains. Sequential reads are not cached as the HDDs already provide comparatively good performance for these.

We have green data in System Memory which was a random read from the Flash Pool aggregate.

When the next Consistency Point is taken, the data will be written to the SSD cache in the aggregate.

An advantage that Flash Pool has over Flash Cache is that SSDs are permanent storage, so we can cache writes as well as reads.

A random overwrite is defined as the same data block that is randomly written more than once. The first write is sent to HDD in our Flash Pool aggregate.

Random overwrites (which are performance intensive for HDD) will be sent to the SSD instead of to the HDD storage if their block size is 16kB or smaller. The earlier written block on HDD will be marked invalid.

Unlike cached reads which are on both HDD and SDD disks in the Flash Pool, the blocks that are cached as random overwrites are only on the aggregate’s SSD cache. They are not written to the aggregate’s HDD yet, but they will be moved there as they get aged out of the cache.

Sequential writes or random writes with a block size larger than 16kB will be sent to HDD as we get comparatively good performance for those on traditional spinning disks. We want to maximise the use of our SSD cache by storing data which will get the biggest benefit from being there.

The Flash Pool keeps track of all random read and write data that has been cached and determines which data is most used. As the cache becomes full and we need to make room for new data, the existing cached data that is less frequently used becomes eligible for ejection.

An eviction scanner is used for this process. We don’t need to remove old data while we still have space in the cache, so the scanner doesn’t run until the cache is 75% full.

Writes which are evicted from the cache are moved to HDD. Cached read blocks are already also on HDD, so no transfer is necessary for those.

You can think of how the eviction process works as taking steps up and down on a ladder. When data is written into the SSD cache, it has a value of ‘neutral’ and enters on the middle rung of the ladder.

When data drops off the bottom rung of the ladder it is evicted from the cache. This process ensures that our frequently accessed ‘hot’ data remains in the cache and gets the performance benefit.

Which Workloads are a Good Fit for Flash Pool?

Flash Pool is most effective at caching random reads and offloading those from the hard drives. It also provides benefit in offloading small random overwrites. An application workload that consists of mostly random reads or writes will benefit from Flash Pool.

Workloads that are mostly sequential will get limited benefit and are not recommended to be stored there.

Small working datasets that are likely to be served completely from System Memory are also not recommended.

The NetApp Automated Workload Analyzer can be run at the command line to determine Flash Pool candidacy for a workload and optimal cache size. Instructions are available on the NetApp website:

With NetApp’s VST technologies of Flash Cache and Flash Pool, it’s not an either/or situation, you can use both in the same system.

The System Memory cache is fastest and is always used first. Blocks can be moved to Flash Cache or Flash Pool as they’re aged out of System Memory.

The table below shows ballpark values for read latency when a NetApp FAS system is under up to fifty percent load for an average workload. The figures are for latency within the node and do not take the network latency between the client and storage system into account.

You can see the huge difference in performance between flash and spinning disk hard drive technologies. When you combine HDD hard drives, pure SSD aggregates, and cache in the same system, you can get a really good balance between performance and capacity at an acceptable price level. 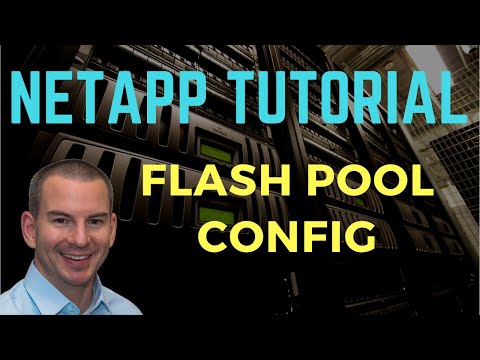 Info: Disks would be added to aggregate “aggr1_C1N1” on node “cluster1-01” in the following manner:

Aggregate capacity available for volume use would be increased by 1.32GB.

2. Verify Flash Pool has been enabled on the aggregate. What is the cache size?

3. How much did the available capacity increase on the aggregate?

The capacity is still 3.51GB. Flash Pool does not increase the available capacity of an aggregate.

4. Create a storage pool named StoragePool1 using 6 SSD disks. Use the ‘simulate’ option if using the CLI, note that creation will fail in System Manager when using the ONTAP simulator.

NetApp – What is Flash Storage?