In this NetApp training tutorial, we will look at how reads and writes are handled and performance optimised in NetApp ONTAP by WAFL, NVRAM and the System Memory Cache. Scroll down for the video and also text tutorial. 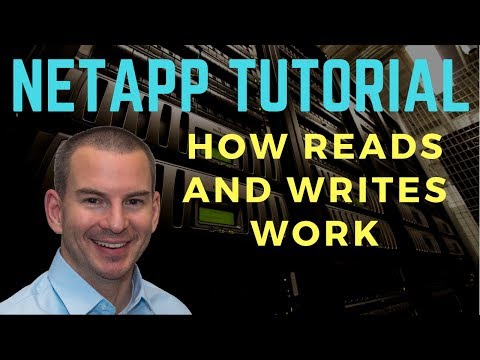 In this example we’re going to look at how reads and writes work to an aggregate which is owned by Controller 1.

We’re going to look at direct data access first. This is where clients hit a logical interface which is homed on the same controller that owns the aggregate. A client sends in a write request for ‘green’ data.

It gets written to system memory on Controller 1, and to NVRAM on both Controller 1 and its high availability peer of Controller 2. The NVRAM mirroring happens over the HA connection between the two Controllers.

The data is written into NVRAM on both controllers, but into system memory on Controller 1 only. The system memory cache is a limited resource and we want to maximise its use.

I’ll explain the use of system memory and NVRAM after you’ve seen how the read process works.

When Controller 2 has written the data into NVRAM it will send an acknowledgement back to Controller 1, again over the HA connection.

Controller 1 will then send an acknowledgement back to the client.

Next another client sends in a write request, this time for ‘yellow’ data.

The yellow data gets put into the top slot in our system memory cache on Controller 1, and the other data gets bumped down a slot.

Controller 2 will send an acknowledgement to back to Controller 1 once it’s got the data in NVRAM.

Then Controller 1 will then send the acknowledgement back to the client.

Next we have a third write request that comes in from a client, for ‘purple’ data this time.

The same process happens again, where it gets written into system memory on Controller 1 and to NVRAM on both Controllers. Again the purple data goes into the top slot in the system memory, and all the other data in the memory cache gets bumped down a slot.

Controller 2 sends the acknowledgement back to Controller 1 once it’s been written to NVRAM.

Then Controller 1 sends the acknowledgement back to the client.

At this point NVRAM is half full and it’s time to write the data to disk.

NVRAM is Half Full

We do this in a consistency point.

Once the data has been written to disk we flush the NVRAM and it’s time to start the process again.

We’ll come back to this point later in this post, but first let’s talk about consistency points (CPs), NVRAM, and what happens when there’s an HA takeover.

Data is written to disk in a Consistency Point when any of these events occur:

Why do we have NVRAM?

System memory is DRAM dynamic memory, it does not survive a power failure. If there was a power outage at this point when the data was still in memory but before it had been written to disk, we could have a problem because the contents of system memory are lost.  If data was only written to system memory this would cause an inconsistent state because as far as the client is concerned the data has been written to permanent storage, but we would now have lost it on the Controller.

Our solution for this is NVRAM. NVRAM stands for Non Volatile RAM, meaning it survives a power outage. If we lose power before the data is written to disk, it can be recovered from NVRAM so we don’t lose it.

NVRAM will write the data back into system memory, and from there it will be written to disk in the next consistency point.

The data is written to NVRAM on both Controllers in an HA pair so that if there is a takeover the HA peer has the data and can write it to disk.

At this point Controller 2 will take over ownership of Controller 1’s aggregates through high availability, it will then copy the pending writes into system memory from NVRAM.

They will then be written down to the aggregates in the next consistency point.

At that point we will flush the NVRAM on Controller 2 and we start the process again.

This is a good time to talk about WAFL, the Write Anywhere File Layout. WAFL is optimized for writes.

As you saw in the previous example it writes many operations to disk at once in a single sequential consistency point. This improves write performance because it doesn’t do separate writes to disk and then send an acknowledgement for each individual client request.

The reason WAFL is called the Write Anywhere File Layout is because all data can be written anywhere on disk. It doesn’t have to write metadata to fixed locations like many other file systems do (metadata is data about other data, for example date created and file size). This reduces the number of disk seek operations and improves performance.

Let’s see how that works. Here we’re looking at a disk that’s being used by another file system which has got fixed locations on the disk for metadata.

We’ve got some existing data on there, so you can see we’ve got our metadata in the metadata section, and our normal data on the other section.

If we then write some new data to that disk, we need to seek to the metadata section for the metadata and then the normal section for our normal data. The disk head is going to be moving between those sections. Whenever we’re doing disk seeks it takes time and decreases the performance.

With WAFL we don’t have fixed locations on disk, all data can be written anywhere.

Here we’re looking at our existing data with WAFL.

We can write new data sequentially so we don’t have to seek between different sections, which improves our write performance.

Okay, this is where we last left off when we were looking at how our writes worked on our Controllers. We had just completed a consistency point in Controller 1 and flushed NVRAM on both Controllers.

Next let’s say we have another write request, this time for ‘blue’ data.

Controller 2 will send the acknowledgement back to Controller 1 when it’s in NVRAM.

Controller 1 will then send the acknowledgement to the client.

Next we have a client send in a read request for ‘green’ data.

The Controller checks its system memory first, sees that it’s there and then immediately sends that data back to the client from system memory. This is much quicker than if it had to serve it from disk.

Whenever we have a read or write the data gets cached, so the green data moves to the top slot in the system memory.

Everything else gets bumped down a slot.

Other Data is Bumped Down

Next we have a read request for ‘red’ data.

In this case it’s not in the memory cache, so the Controller has to fetch it from disk, it will then be cached into the top slot in system memory and sent to the client.

Again the existing contents of system memory are bumped down a slot.

We’ve stepped back one step here. The client sends in a read request for that red data again, but here we’re hitting a logical interface on Controller 2.

When that happens the read request will be sent to Controller 1 by Controller 2 over the cluster interconnect. Controller 1 will first check to see if it has the data in system memory.

Read Request is sent to Controller 1

It doesn’t in this example, so it will fetch the data from disk, it will then be written into the top slot in system memory and the data will be sent over the cluster interconnect out to the client via Controller 2.

The contents of the memory cache on Controller 1 will again be bumped down a slot.

Notice that it’s the memory cache on Controller 1 which is used here rather than on Controller 2. This is good because it means that whenever a read request comes in and hits any Controller in a cluster, we’re going to use the cache on the Controller which owns the aggregate. This optimizes the use of the cache on each Controller.

The way reads and writes were explained here was slightly simplified to make it easy to understand. The system actually uses a more intelligent algorithm rather than all reads and writes being cached and going into the top slot in memory.

Performance optimizing algorithms are used to distinguish high value randomly read data from sequential and or low value data, and maintain that data in the cache to avoid time consuming disk reads.

Another technique which optimizes the performance is readahead. Readahead is a proactive mechanism that enables the system to detect and improve performance for read patterns. When a pattern of common reads is detected the whole pattern is cache into memory.

This is the first of a three part series, the next two parts expand on this post to explain how reads and writes are handled when NetApp VST caching technologies are deployed.