In this SAN and NAS Storage tutorial, I’ll cover the basics of Network Attached Storage and show you what NAS looks like from the client’s point of view with a lab demo. I will also examine the differences between NAS and SAN. Scroll down for the video and also text tutorial. 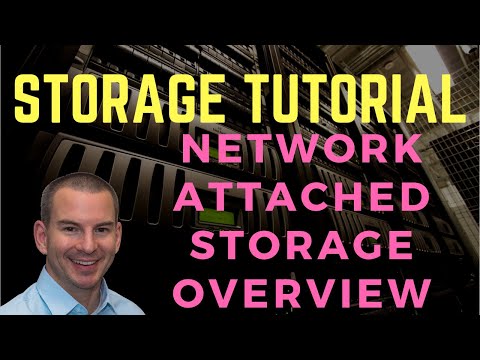 What is NAS – Network Attached Storage?

NAS typically uses the existing data network infrastructure. So the existing network cards, cables, and switches that were already there in your local area network and it is being used for data, will also be used for storage as well.

What is SAN – Storage Area Network?

SAN stands for Storage Area Network and it provides block level access to the storage resources. With SAN the management of the file system resides with the client. The client connects to its storage and gets low level block access to that storage.

The client will see it showing up just like as if you’d added a new hard drive in the client and it will have to format the storage with a file system before it can use it.

SAN typically has a dedicated storage network infrastructure. We don’t use the existing network cards, cables, switches that we have for our normal data network, we will put in a dedicated network just for storage.

SAN Only – Boot From SAN

A feature that is only available in SAN is ‘Boot from SAN’. Because SAN provides block level access, which appears the same to the client as a locally installed drive, it’s possible to boot directly from the remote storage.

This makes it possible to have diskless servers where we don’t even need to put a local hard drive in that server. We can get really good cost savings from this. Boot from SAN is only supported on SAN, not NAS… that’s why it’s called ‘Boot from SAN’.

CIFS is the Common Internet File system, it’s a version of SMB, the Server Message Block. There are slight differences between the two terms but they’re often used interchangeably.

CIFS was developed by Microsoft and designed for Windows-based clients. UNIX, LINUX, and other clients can however also access CIFS shares through the use of Samba. With CIFS, the servers share the storage and the clients use or map that share.

Please watch the video to see a hands-on demonstration of connecting to a CIFs share from a Windows client.

NFS is the Network File System. It was developed by Sun Microsystems originally for UNIX based clients, so it’s a good fit for LINUX as well. Just like how other operating systems can access CIFS shares, other clients like Windows and VMware ESXi can also access NFS exports.

Check the video to see a Linux client mounting an NFS export in the lab.

Unified storage: The Change You Need