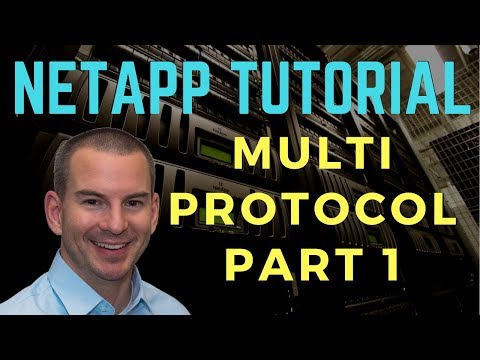 I bought your course and think it is outstanding, exactly what I needed. I was able to stand up a pair of NetApp FAS systems with your content.

There are four different security styles in NetApp ONTAP:

We specify the security style when we configure a volume. Different volumes on the same storage system can have different security styles.

If the security style is set to UNIX, UNIX permissions are always used on the files and folders in that volume or qtree. You can’t set NTFS permissions on a volume that has the UNIX style.

If the security style is set to NTFS, then NTFS permissions are always used.

If the security style is set to mixed or unified, then either permission style can be used on directories and files. Whichever type of client last modified the permissions that will be the style used.

The file doesn’t have both Windows and UNIX style permissions at the same time, it’s one or the other.

By default, the effective security style on all data in NTFS security style volumes is (not surprisingly) NTFS. A Windows ACL allowing Full Control to Everyone is applied by default.

You can of course change the permissions on the files and folders in the volume for tighter security. Let’s refer to the above flowchart to see how the authentication of Windows users works. Windows users can either be authenticated by an Active Directory Domain Controller, or by local user accounts on the NetApp storage system. They will be authenticated if they've entered a valid username and password. In the real world Active Directory integrations are used far more often than local user accounts because they're a lot more scalable and convenient. The flowchart above shows what happens when a user is successfully authenticated.

The NetApp administrator can configure a manual mapping from a Windows user to a UNIX user. For example, you could map the Windows username ‘Joe Bloggs’ to a UNIX user ‘JBLoggs’. If a mapping exists the storage system will check to see if the UNIX user has access to the data.

If a Windows user is explicitly mapped to a null string by the NetApp administrator in the mapping rules, they will be regarded as an invalid user (see the next slide below for what happens with invalid users).

The UNIX user will be verified by ‘files’ (local authentication), NIS, or LDAP. Next, let's consider what happens with Windows unauthenticated or invalid users who are trying to access data in a volume or qtree with a UNIX security style. First, the system checks to see if the guest account has been configured. If not (it is disabled by default) then they will be rejected. That covers the Windows to UNIX mapping. Next, let's see what happens in the other direction with UNIX to Windows mapping. When a UNIX client accesses a NetApp storage system, the storage system receives the UID and the GID. The storage system resolves the UID to the UNIX username by files, NIS, or LDAP. It will be either a success or failure depending on if there’s a matching user and password. If the credentials are valid then the system checks the mapping rules. The storage system will first check if an administrator has explicitly mapped the UNIX user to a Windows user.

If a mapping does exist, for example, the UNIX user JoeBloggs to the Windows user JBLoggs, then the system will check to see if JBloggs has permission to access the data.

If the UNIX user is mapped to a null string then they're considered as an invalid user.

The Windows user is verified by the local storage system user database or by a Windows Domain Controller. If the client is mapped to a valid Windows username with permissions to access the data, then they will be accepted. What happens to the failed UID to UNIX username or to an invalid user is very simple - they'll be rejected and won’t have access to the data.

Best practice and how to configure the name mappings will be covered in the upcoming Part 2.