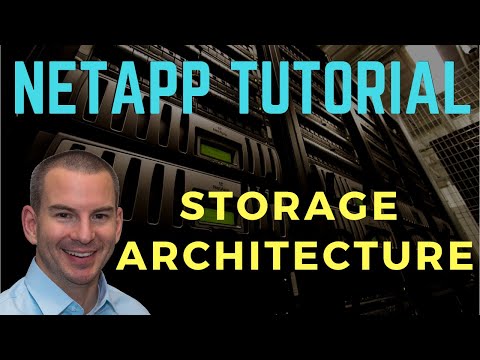 At the bottom level of the storage architecture we have our physical disks – our hard drives. Our disks get grouped into aggregates, so an aggregate is a set of physical disks. One of the attributes of our aggregates is the RAID group which defines the RAID configuration.

The next level we have moving up is our volumes. You could have multiple volumes in the same aggregate, or maybe just one volume in the aggregate. Volumes are the lowest level that clients can access data at, so you will always have disks, aggregates and volumes on a NetApp ONTAP system. You can share (for Windows) or export (for UNIX/Linux) a volume and then clients can access it.

Moving up the next level above volumes, we have our Qtrees which go in volumes. Qtrees are an optional component. If the containing volume is being accessed by a NAS client, it will see the Qtree as a directory in the volume. Qtrees can also be shared or exported directly themselves.

They’re called Qtrees because one of their main functions is for quotas. You can limit the total size that the Qtree itself can grow to, or limit the amount of space that a user or group can use in the Qtree.

The last component we have in the storage architecture is our LUNs, our Logical Unit Numbers. A LUN is specific to SAN protocols, and is the storage container that SAN clients use for their storage. The LUNs can either go in a Qtree or a volume. Best practice is to have a dedicated volume or Qtree for each LUN (do not put multiple LUNs in the same volume or Qtree).

You can see the different components build on top of each other. We need to have our physical disks. Our disks get grouped into aggregates. For our clients to be able to access data we configure our volumes, which go in our aggregates, and optionally we can configure Qtrees which go in our volumes and appear as a directory to NAS clients.

Lastly, if we’re using SAN protocols we’ll need to configure LUNs. Our LUNs either go into a Qtree or into a volume.

The mandatory components are the disks, aggregates, and volumes. Qtrees are optional, and LUNs are for SAN Protocols only – you wouldn’t have LUNs if you were using only NAS protocols.

If you’re working in the System Manager GUI, you’ll see they’re listed under Storage Virtual Machines. If you’re doing your configuration in the CLI the commands still use the ‘vserver’ syntax.

Say that you’ve got two different departments – Department A and Department B. They want to have their own separate secure storage. In the old days, what you would have to do is buy two completely separate storage systems, and you would require separate supporting network infrastructure for them as well. This would be pretty expensive.

If the aggregates were dedicated at the SVM level, you would have to go and buy more disks for department B, even though you’ve got spare disks on Department A. Aggregates are a shared resource to ensure we get the most efficient use of our capacity.

Another common reason for configuring separate SVMs is for ease of administration of multiple client access protocols. You could run NFS, CIFS and iSCSI for example all in the same SVM. In this case it will appear to all clients that they are accessing the same storage system. Or you could configure separate SVMs for each protocol, in which case they will appear as separate storage systems. Both configurations are supported.

SVMs are also very useful in a cloud environment, where we can have separate SVMs for different customers.

If you don’t need to configure separate logical Storage Virtual Machines in your enterprise, you’ll still have at least one SVM. SVMs are an integral part of the NetApp storage architecture, they house our volumes and LIFs so they are a mandatory component for client data access.

Want to explore the NetApp storage architecture on your laptop? Download my free step-by-step guide ‘How to Build a NetApp ONTAP Lab for Free’