In this NetApp training tutorial, I will explain the NetApp Interface Groups. Interface Groups enable link aggregation of one or more Ethernet interfaces. This is the first in a series on NetApp networking, you can find links to the other tutorials at the bottom of the page. Scroll down for the video and also text tutorial. 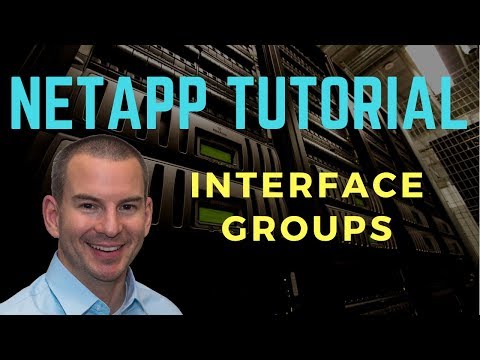 NetApp Interface Groups are similar to NIC teaming on a standard server. They can be used to achieve redundancy (and possibly load balancing) for our network ports, links, and switches. NIC teaming bundles multiple physical links into a single logical link with one shared IP address.

If we then have an outage of a port, link or switch then we still have connectivity to the IP address through the surviving path. You can see an example of this in the diagram below:

We don’t need Interface Groups for physical port redundancy on our NetApp systems. This is because we have Failover Groups that handle it for NAS protocols and Multipathing on the client that handles it for SAN protocols.

I’ll cover Failover Groups and Multipathing in detail in later blog posts. For now, let’s focus on Interface Groups. You’re probably wondering – if Interface Groups aren’t required for redundancy, then why do we have them? I’ll get to that below.

There’s a couple of different types of Interface Groups: Single-Mode and Multimode.

We can use Failover Groups instead, which provide the same level of redundancy without giving up half of our available bandwidth.

Single-Mode Interface Groups do not need any special configuration on the attached switches. The switches can be configured the same as if they had a normal end-host attached.

Multimode Interface Groups are active/active and provide redundancy and load balancing. They can be used to provide the bandwidth of multiple interfaces to a single IP address. There are two types of Multimode interface: Static (802.3ad) and Dynamic (LACP).

LACP is preferred out of the two as it’s the more modern and stable protocol. You would only use Static if the switch has support for that but not for LACP.

Multimode Interface Groups need a matching configuration on both the storage system and the attached switches. The link bundle must be negotiated by both sides for it to come up. The configuration on the switch is known as a Port Channel, EtherChannel, or Link Aggregation (LAG).

We look at the effects of configuring Interface Groups in the diagram below.

With the ‘before’ example on the left, we haven’t configured an Interface Group. There are two interfaces, e0c and e0d. In our example these are 1Gb Ethernet interfaces.

Now let’s consider the case of ‘after’ on the right of the diagram, where we have configured an Interface Group. We’ve got the same two 1Gb Ethernet physical ports again, e0c and e0d, but now we bundle them into an Interface Group. Notice here we’ve named it a0a.

You can actually call the Interface Group anything you want but the standard naming convention is to prefix it with an ‘a’ for ‘aggregate’.

We’ve done that and have now got a single Logical Interface with IP address 172.23.10.10. The Logical Interface can no longer be placed on e0c or e0d as its home port because they are members of an Interface Group now. We could only put it on interface a0a.

The benefit we get from doing this is that now we’ve got a single IP address which has 2Gb worth of bandwidth rather than just one, and the IP address will remain available if a port or cable fails.

Next, we’ll take a look at supported configurations.

For a normal Windows server we would prefer the top option because that gives redundancy for the switches whereas the bottom option does not. With NetApp we have Failover Groups however so the second option is equally viable, we will still have redundancy.

If we implement the top option and the switch on the left fails then our clients can still reach 172.23.10.10 because of the other link in our Interface Group.

If we implement the bottom option and the switch fails then our clients can still reach 172.23.10.10 because our Failover Group will fail it over to port a0a on Controller 2. 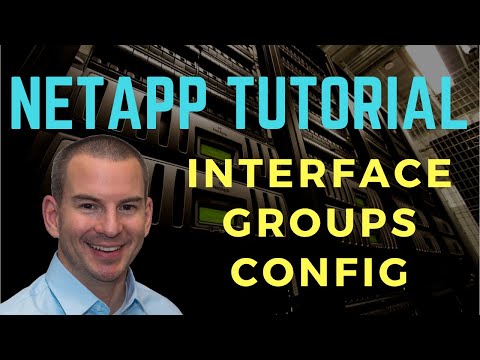 Ports e0d and e0e on both nodes are not members of a Broadcast Domain and do not have any Logical Interfaces on them.

How Interface Groups Work in ONTAP