In this NetApp training tutorial, I will explain about NetApp VLANs. This is the second post in our NetApp networking video tutorial series. Scroll down for the video and also text tutorial. 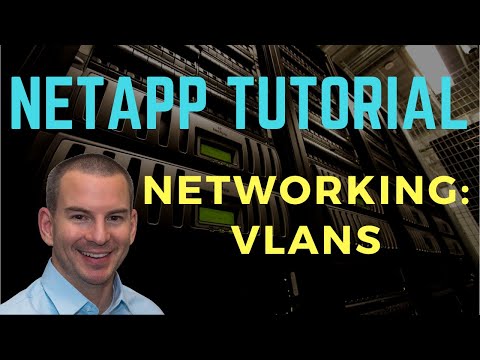 VLANs are ubiquitous in networking in general, where they are used to enhance performance and security on the campus. VLANs can optionally be extended down into the NetApp storage system to provide OSI Layer 2 segregation between Logical Interfaces homed on the same physical port or Interface Group. You can find links to the other videos in the series at the bottom of the page.

The way that secure multitenancy is enabled on our NetApp systems is with the use of Storage Virtual Machines (SVMs). Two of the main components that are specific at the SVM level are Volumes and Logical Interfaces (LIFs).

Now, in an ideal world, we’d like to have a Physical Interface dedicated to each of our LIFs, as shown in the following diagram:

In this example we’re just using one switch, so we would split up the two departments over two different VLANS which would be created on the switch. Another way to do it would be to have two separate switches, one for each department.

Whichever way we do it, the two departments are kept strictly separate from each other. In this scenario, as mentioned earlier, we only need to configure the VLANS on the switch, a standard practice in networking. There is no need to configure VLANS on the NetApp system in this example. That’s an “ideal world” scenario, where we’ve got a dedicated Physical Interface for each of our LIFs.

Unfortunately, we don’t live in an ideal world, so that configuration will not always be possible. We might have more LIFs than we’ve got Physical Interfaces available to home them on. This is particularly likely in a storage service provider environment, where they can have lots of customers. In a case like this, we’re going to have multiple LIFs using the same Physical Interface.

This means we’re going to have different customers coming in on the same Physical Interface. We still need to keep them strictly separate from each other. In this case, we’ll need to configure VLANs on the storage system as well as our switch. The VLANs are going to be trunked all the way through.

In the example below, you can see that both the “DeptA” and “DeptB” SVMs are using the same physical interface, e0a:

We configure VLAN 10 for the “DeptA” SVM and VLAN 20 for the “DeptB” SVM. As a result, our physical interface e0a is going to be split into two sub-interfaces:

Now let’s consider how our VLANs are going to interact with our Interface Groups. In our example below, we don’t configure VLANs on the NetApp storage. Again, we’ve got “DeptA” and “DeptB”. In this case, we’ve got enough Physical Interfaces to allow us to dedicate a couple to “DeptA” and another couple to “DeptB”.

If we don’t have enough physical interfaces to allow us to dedicate them per SVM, then we can run VLANs on top of an interface group. That’s what we’ve done here:

Work with the Networking Team

Now, I want to give you a final word on Interface Groups and VLANs. If you’re inexperienced in networking, right now you might be thinking: “Okay, I think I understand interfaces and VLANs, but I’m not sure how I’d actually implement them in my real-world environment.” Well, that’s where your networking team comes in.

Your networking team eat, breathe and sleep VLANs and Interface Groups. They will be very comfortable with this. If you tell them what it is that you want to achieve, they will be able to give you advice on the best way to configure your Interface Groups and your VLANs.

It’s quite possible that you won’t actually need to configure VLANs. You’d only need to do that if you’ve got IP addresses in different IP subnets and different VLANs that are homed on the same interface. 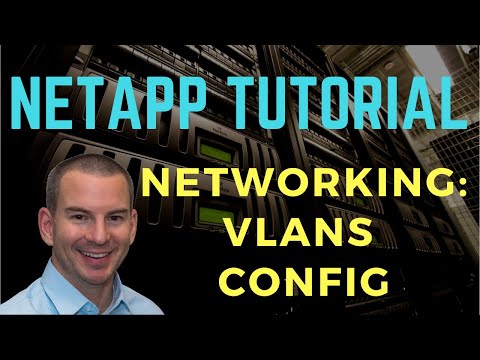