In this NetApp training tutorial, I will explain the NetApp IPspaces, the fourth post in our NetApp networking video tutorial series. Links for the other videos in the series are at the bottom of the page. Scroll down for the video and also text tutorial. 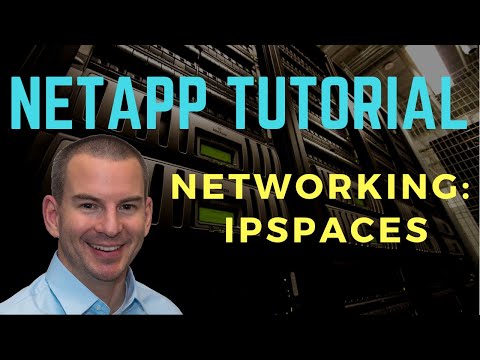 My company sent me to the one week official NetApp class but in my opinion this is better, he covers much more detail than they covered in the official class. I took this class to prepare for the NetApp certification which I just obtained on Friday.

NetApp IPspaces allow Storage Virtual Machines (SVMs) which are in the same cluster to have the same (overlapping) subnets and IP addresses. The IPspaces feature became available in NetApp Custered ONTAP version 8.3. In previous versions of the operating system, Data Logical Interfaces (LIFs) in the same cluster had to have unique IP addresses. Now, with the IPspace functionality, LIFs in different SVMs can have the same IP address as each other.

Let’s clear a possible misconception up first: IPspaces are not required for secure multi-tenancy, SVMs provide that functionality. The secure multi-tenancy capability was already available prior to Clustered ONTAP v8.3. The purpose of IPspaces is simply to allow the use of the same IP address on multiple SVMs in the cluster.

Hopefully right now you’re thinking ‘wait – why would I ever want to have duplicate IP addresses on my SVMs?! I’d have to have some kind of weird network to need that.’ You’re right, it’s not a commonly used feature. In the vast majority of deployments you can just leave everything in the Default IPspace and forget that the feature even exists.

Cases where the feature could be required though include:

Multiple SVMs can be in the same IPspace. All LIFs, by default, are members of the default IPspace. If you don't need to support overlapping addresses, the default configuration can be left as is. In many cases, you will not need to configure any IPspaces so you can just forget about them. The default IPspace will still exist and everything will be in it. As long as we don't have overlapping addresses, we don't need to configure any duplicate IP addresses on our LIFs.

With IPspaces, each SVM maintains its own routing table. IPspaces are the NetApp equivalent of Virtual Routing and Forwarding tables (VRFs), which is a technology that allows multiple instances of a routing table to coexist on the same router. If you come from a networking background, you'll already know what VRFs are. If you don't have networking experience and you haven't heard of VRFs before, there’s no need to worry about it. I’m just including it here as a useful comparison for the network engineers out there.

Here's an example of when we would need to implement IPspaces:

Here we have three SVMs split over two IPspaces:

Want to practice NetApp IPspaces on your laptop? Download my free step-by-step guide ‘How to Build a NetApp ONTAP Lab for Free’

Be careful if you're using documentation from the NetApp website, most of the articles focus on the old 7-Mode feature which was also called IPspaces.

Want to practice NetApp storage on your laptop for free? Download my free step-by-step guide 'How to Build a NetApp ONTAP Lab for Free'