In this NetApp training tutorial, I will describe the different networks that NetApp ONTAP storage systems are connected to; the Data Network, Management Network, Cluster Interconnect, and High Availability connection. Scroll down for the video and also text tutorial. 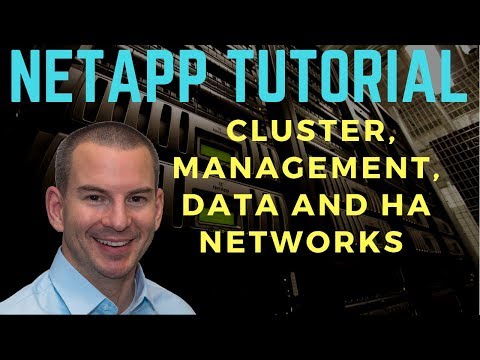 The first network we’ll look at is the High Availability connection between our controllers.

The FAS2500 Series platforms support either one or two controllers in the chassis. If we have just one controller in the chassis it’s a single point of failure, so we’ll usually deploy two for redundancy, configured as a High Availability HA pair.

When we have High Availability for our controllers on the FAS 2500 Series, the FAS8020, the FAS8040, and single chassis FAS8060, there’s two controllers in the same physical chassis. In that case, the HA connection between the controllers is internal in the chassis. We don’t need to do any cabling for it.

On the dual chassis FAS8060 and the FAS8080 EX, the two controllers in an HA pair are in physically separate chassis’, so HA cables must be psychically connected between them.

Let’s have a look at those two different types. The picture below shows a FAS8040 or single chassis FAS8060 which have two controllers in the same chassis. In this case the HA connection is internal, we don’t need to physically connect anything. 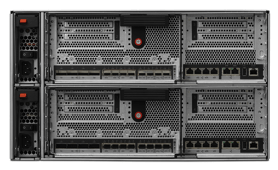 The next picture shows a dual chassis FAS8060 or the FAS8080 EX, which have two controllers in two different chassis’. An IO expansion module is fitted in the bottom half of both chassis’. In the bottom right of the expansion modules there are two InfiniBand ports which are used for the High Availability connection, and we connect those together between the two different chassis’ in the HA pair.

See my next post for a full description of how High Availability works.

The next network we’ll look at is the Cluster Network. This is used for traffic that is going between the nodes themselves, such as system information that is being replicated between the nodes. For example, when you make configuration changes it will be written to one node and then replicated to the rest. Also, if incoming client data traffic hits a network port on a different controller than the one which owns the disks, that traffic will also go over the cluster network.

Your disks are always owned by one and only one controller. You can see in the example below we’ve got two nodes, Controller 1 and Controller 2.

The aggregate itself is always owned by only one controller. Both controllers are connected to their own and to their High Availability peer’s disks through SAS cables. The SAS cables are active-standby. We don’t load balance incoming connections over the SAS disk shelf cables, only over the cluster interconnect.

The options for our cluster are:

With a single node cluster you just have one controller without High Availability and it is a single point of failure.

If you have two nodes in your cluster you have the choice of a switched or switchless cluster.

If you’ve got more than two nodes then you have to connect them all together with a pair of dedicated cluster interconnect switches.

If you’ve only got two nodes in your cluster then you have the choice of either connecting your two nodes directly to each other or using the external cluster interconnect switches. The advantage of a switchless two node cluster is that you don’t have the external switches, so you save a little on the complexity, hardware cost and rack space. The advantage of having a switched two node cluster is that it’s easier to add additional nodes later.

When you do have a switched cluster with more than two nodes, every pair of nodes has to be the same model of controller, and each pair is configured as a High Availability pair. All nodes will be connected to each other through the cluster interconnect. Each pair of nodes (for example Nodes 1 and 2, nodes 3 and 4 etc) will also be connected to each other with a High Availability HA connection.

The cluster network uses 10Gb Ethernet ports on our controller. We have a four node cluster in the example below.

The first supported switch is the NetApp CN1610. It can be used for clusters with up to eight nodes. It has sixteen 10Gb Ethernet ports, and four of those ports are used for the inter-switch links.

If you have more than eight nodes in your cluster then the NetApp Switch doesn’t have enough ports. In that case you need to use the Cisco Nexus 5596, which has 48 10Gb Ethernet ports. It’s upgradeable to 96 ports, but 48 ports is plenty for the Cluster Interconnect Switch. Eight of the ports are used for the inter-switch links.

In early versions of Clustered ONTAP you always had to install the dedicated cluster interconnect switches, even if you only had two nodes in your cluster.

NetApp listened to their customers and there is now support for ‘switchless two node clusters’.

The diagram below shows a FAS8040 or a single chassis FAS8060 configured as a switchless two node cluster. Rather than using separate external switches, we connect two 10Gb Ethernet ports on both controllers directly to each other.

Notice that this is different than High Availability HA. For HA, when we’re using a single chassis, we don’t need to cable anything, the connection is internal. For the Cluster Interconnect, even when the two controllers are in the same chassis, we have to physically cable them together. This uses two of our 10Gb Ethernet ports.

If we have a dual chassis FAS8060 or the FAS8080EX, we’re going to have a similar configuration. Again, we connect two of the 10Gb Ethernet ports on both controllers to each other.

The next network that our system is connected to is the Management Network. It’s use is pretty self-explanatory: it’s used for our incoming management connections, such as when we’re using the command line or the System Manager GUI.

NetApp recommend using dual management connections for redundancy, where you configure two ports in your controller for management, and connect them to two separate switches.

This is not mandatory. If you only had one Management Network path and you lost it, your clients would still be able to access their data, you just wouldn’t be able to make any changes until you’d fixed the problem.

If you have up to eight nodes in the cluster then you can use the NetApp CN1601 as a management switch. It has sixteen 1Gb Ethernet ports.

If you have more than eight nodes in your cluster you can use the Cisco Catalyst 2960. The Catalyst 2960 is one of Cisco’s workhorse switches and it comes with various options on how many ports it has. For the NetApp Management Network, use a 24 port switch.

The data network uses Ethernet or Fibre Channel ports on our controller, depending on the client access protocol.

Unlike the Management Network, if you have a single Data Network path and it goes down then your clients will not be able to access their data. The Data Network is almost certainly going to be mission critical for your enterprise, so for sure you’re going to have redundant paths.

Typically the Data and Management networks will have separate physical switches, but running them both over the same pair of shared physical switches is also a supported configuration. In this case, you’ll still use separate physical ports on the controller, but you can have both your data and your management ports connected to the same switch. Use VLANs on the switch to split the networks from each other.

Want to practice NetApp networking on your laptop? Download my free step-by-step guide ‘How to Build a NetApp ONTAP Lab for Free’