In this NetApp training tutorial, we will take a look at NetApp Thin Provisioning which makes it appear to your clients that they’ve got more storage available than the actual physical storage space that is really on their storage system. Scroll down for the video and also text tutorial. 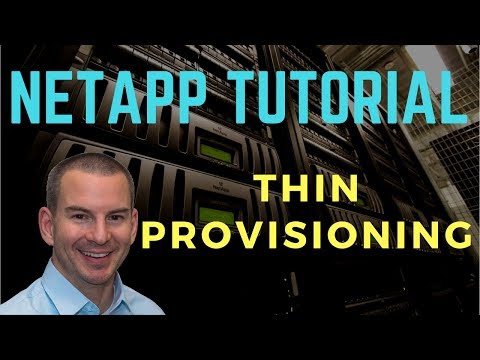 Thin provisioning allows you to present more logical storage to your clients than the amount of physical storage you actually have.

Let’s say that you have got 20 terabytes available, you can actually make it look to your clients that they’ve got 40 terabytes of storage. Instead of allocating space upfront, storage space is dynamically allocated to each volume or LUN as the data is written.

So let’s see how traditional storage allocation works. Let’s say the organization that you’re working in does not have a centralized storage system and instead, you’re using disks inside the server’s chassis themselves.

Now, I know that in a real-world environment, if you were doing that, you’d have multiple disks in each server in a RAID configuration. But to make things easy to explain and understand, let’s say that we’re just using one disk in each server.

For example, you are in charge of purchasing and the server team comes to you and they say that they want a new server and it’s going to require 200 GB of storage space.

You’ve dealt with this server team before and you know that they commonly underestimate the required storage.

The problem here is that you can’t buy 400 GB hard drives. Therefore, you end up buying a 500 GB hard drive for that server. If you look at the utilization now, the request was 200 GB. That’s what’s expected to actually be required.

However, you ended up paying for 500 GB worth of storage. So on that 500 GB, 300 GB is actual physical hardware that you’ve paid for may never be used and that is being wasted.

Even worse, if this organization doesn’t just have one server, this problem is going to be multiplied. You can see that if they have 10 servers in the same situation, 10 servers times 200 GB is equal to 2 TB worth of disk space that is actually required.

This is where thin provisioning comes in. When we use thin provisioning on our centralized storage system, we reconfigure those ten 500 GB volumes. We then present each of those 10 servers with 500 GB worth of logical space but actually underlying that, we’ve only paid for 2 TB worth of storage.

We will then buy what is actually going to be used. If later on, it does turn that the server team underestimated the amount of space that is required, we can then buy additional disks and add them. That’s going to be completely transparent to the clients.

Rather than buying our hardware ahead of time “just in case”, we end up buying the hardware as we need it. Therefore, it is “just in time” or not too much early.

We also get additional benefits such as disks’ prices come down over time. Since we’re buying them later, we’re going to get more value for money. We’re taking up less disk space that requires less power and cooling, so we get additional cost savings as well.

One caveat when you’re using thin provisioning is you do have to monitor more carefully. When using thick provisioning, the free space reported in the volume is the same as the physically available space.

It’s easy for storage admins and the actual users of this storage to see when this space is running out. The users themselves can see when they’re running out of disk space and they can tell you, the storage administrator, that you need to correct that.

When using thin provisioning, you can run out of underlying physical disk space in the aggregate while clients still report free space available. The actual user of the storage might see that they’ve got disk space left available, but the aggregate fills up and then they’ve actually run out of disk space before they knew it was going to happen.

You can see that the disk space is being allocated to the volumes first-come, first-served basis. Then, we create another new volume, volume three. We start writing to that and we also write to volume one on volume two.

Again, you can see that the disk space is being allocated there first-come, first-serve. It’s possible that we could actually fill up the aggregate. When that happens, none of the volumes will be able to write through it anymore.

How much space each volume got in that aggregate just depends on who was writing data at what particular time. You can, of course, limit the amount of space available to a volume when you set the size off the volume.

NetApp ONTAP uses the WAFL (Write Anywhere File Layout) file system, with the ‘Write Anywhere’ meaning we don’t have any fixed blocks on disk. Whenever a client writes request comes in for any volume, it can be written to the next available block.

We don’t have fixed blocks for the different volumes. Writes are written sequentially in a first-come, first-serve manner.

As I mentioned earlier, you can mix and match both thin and thick provisioned volumes in the same aggregate.

For example, we’ve got 2 TB of the aggregate, which is the actual physical space, and we have got 10 500 GB volumes. Now, two of those volumes are really important. We want to make sure that they do not run out of disk space. Therefore, we will configure those two volumes as thick provisioned.

What happens now is they actually have that 500 GB each reserved in the aggregate. That takes up 1 out of the 2 TB. The other 1 TB worth of space is going to be allocated first-come, first-serve to the eight remaining volumes.

Those eight other volumes could actually run out of space when they’ve only got 100 or 200 GB at the volume level because their aggregate is full. The two volumes that we thick provisioned at 500 GB are guaranteed 500 GB worth of space. Hence we’re not going to run out before that.

Similar to the volumes, we can also enable thin provisioning for LUNs. There’s a potential issue with this, caused because hosts manage the file system themselves on their LUNs. As a result, the host and the storage system may report the used space differently.

Let’s see how it works. We’ve got a LUN in the example below.

Then, the client writes the third file to the LUN.

The client then deletes files one and two, but it doesn’t actually delete the blocks on the storage. It just marks them as being available to be overwritten, so the storage system doesn’t know they’ve been deleted.

The client would now report 25% of the space is used, but the storage would still report 75% of the space as being used. Then, the client writes the fourth file to the LUN. It’s also 25% of the LUN space (bear with me here, we’re nearly there!).

To resolve this problem, NetApp has reclamation technology. Client-side software such as SnapDrive and SnapManager can free up the blocks they’re not using on the storage system, leading to space savings from thin provisioning again. 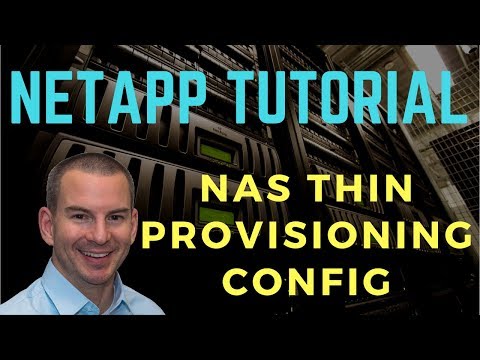 2. Copy and paste the ‘C:\Program Files\Windows Defender’ folder into the ‘Test’ folder on the Desktop.

4. Copy and paste the ‘C:\Program Files\Windows Defender’ folder into the ‘Test’ folder on the Desktop again.

6. Create a 100 MB thick provisioned volume in the NAS SVM named thickvol in aggr2_C1N1. Mount it in the namespace directly under the root volume. You can ignore any warning message about the export policy because CIFS (not NFS) is being used for access.

7. Create a 100 MB thin provisioned volume in the NAS SVM named thinvol in aggr2_C1N2. Mount it in the namespace directly under the root volume. You can ignore any warning message about the export policy because CIFS (not NFS) is being used for access.

8. Share both volumes using the same name as the volume.

9. Log in to the WinA host as administrator and map network drives to the thickvol and thinvol

10. Copy the Test folder from the Desktop into thickvol.

11. Copy the Test folder from the Desktop into thinvol.

12. Check the size of the Test folder on the Desktop.

13. How much space do you expect thickvol and thinvol to be using in their aggregates? Verify this.

Back to Basics: NetApp Thin Provisioning