The original name was inexpensive disks, but then the drive manufacturers thought that didn’t sound very good from a marketing point of view, so the more common modern term now is “Redundant Array of Independent Disks.” Scroll down for the video and also text tutorial. 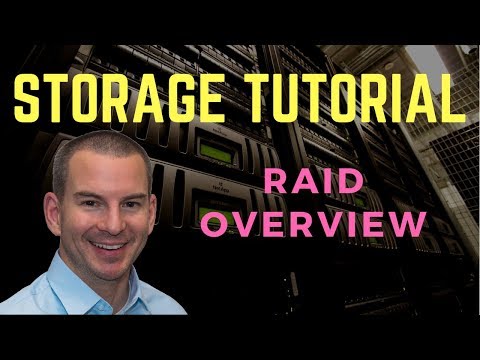 RAID can be managed in software by the operating system or in hardware by a controller.

In the video I cover the popular levels of RAID. The other types are not commonly used in today’s production networks.

The first type to cover is RAID 0, which is also known as a striped set. Data is split evenly across all the disks in the set. That provides better performance, but no redundancy. If any disk in the set fails, then all the data is lost and we would have to recover that from an external backup.

It’s actually less reliable than a single disk, because if for example you’ve got 5 disks, at any given point of time it’s more likely that one of them is going to fail than if you just had that single disk.

RAID 0 gives us better performance because we can write our data to multiple disks at the same time. It’s quicker to write the same amount of data concurrently to multiple disks than it is to write it to one disk. There is some overhead so it’s not as simple as if you’ve got 5 disks you will get 5 times the speed, but the more disks (also called spindles) you have, the better performance you’re going to get.

The next RAID type we’re going to cover is RAID 1, which is also known as a mirrored set. RAID 1 is like a reverse of RAID 0. A copy of the data is written to both disks in the set which provides redundancy. If one disk fails, we still have a working copy of the data on the other disk. Write performance is not improved, as we write a copy of the same data to both disks at the same time. Read performance, however, is improved as reads can be serviced by either disk.

The next RAID type is RAID 4. This uses block level striping with a dedicated parity disk. The parity disk is used for redundancy – data can be recreated from parity if one of the disks in the set fails. We can survive a single disk in the set failing.

Read performance is improved as multiple disks concurrently service reads. Write performance is not improved, as all parity data is written to the same single disk.

When you use RAID 4, you don’t get the full capacity of all the disks in the set. If you’ve got 3 drives, you’ll get the capacity of two disks as your usable capacity, because one of the drives is reserved for the parity information.

If I do lose a drive in my set I can still carry on servicing the data to my clients. There will be a performance hit when this is happening, because the data is going to have to be recalculated from parity for that failed drive.

The failed drive should be replaced as soon as possible. It will take some time to calculate from parity the data that was on there and write it back onto the disk. Once that has been completed, then it will be back up at the initial level of performance.

Our next type of RAID to discuss is RAID 5, which uses block level striping with distributed parity. RAID 4 was block level striping with a dedicated parity drive. RAID 5 distributes the parity information across all the drives in the set. Similarly to RAID 4, data can be recreated from parity if one of the disks in the set fails. Read performance is improved, as multiple disks concurrently serve reads, and write performance is also improved as parity data is spread throughout the set. That’s one advantage of RAID 5 over RAID 4. Other than that, they’re very similar.

The next type is RAID 6 which is similar to RAID 5. It uses block level striping with two parity blocks distributed throughout the set. RAID 5 has got one parity block, RAID 6 has got two parity blocks. Because it’s got two, data can be recreated from parity if two of the disks in the set fails. We need to have three drives fail before we would have to recover from an external backup. With RAID 6, like RAID 5, read and write performance is improved.

We can also set up hybrid RAID, where RAID levels are nested into a hybrid set.

In RAID 0 + 1 we do it the other way around, and multiple RAID 0 sets are nested into a RAID 1 mirror.

A word of warning. If you use different capacity sized disks, the usable size is going to be limited to the size of the smallest disk. Say we had a RAID group already which had five 500 gigabyte drives in it. Then we want to add some additional storage space, so we add a 1 terabyte drive. That 1 terabyte drive will be sized down to 500 gigabytes, the same size as the rest of the disks, so 500 gigabytes would be wasted. Obviously you don’t want to do that. Make sure that all the disks in your RAID group are the same size.

There is a similar issue with speed. Basically, all the disks in your RAID set should be the same type (SSD/SAS/SATA), size and speed.

Get my Introduction to SAN and NAS Storage video training for free here: