In this NetApp training tutorial, I will give a guided tour of the FAS8000 series platforms which comprise the FAS8020, FAS8040, FAS8060 and FAS8080 EX models. I will also explain the hardware architecture and available ports on the back of the controllers. Scroll down for the video and also text tutorial. 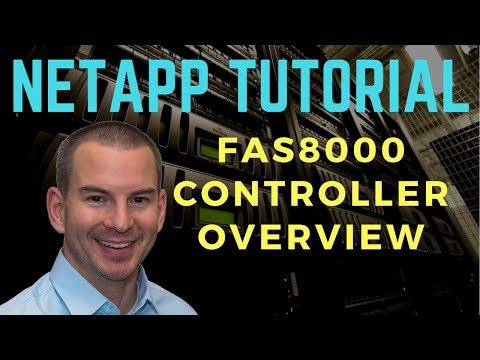 You can see my previous post for a tour of the FAS2500 platforms.

The FAS8020 comes with two controllers in a single 3RU chassis, which provides High Availability. Controller 1 is at the top:

The platform has dual redundant power supplies, one on the left and one on the right of the chassis:

Looking at the ports, starting on the left of each controller we have two SAS ports for connectivity to disk shelves:

Then there is a pair of lower bandwidth 1Gb Ethernet ports:

Next is the Ethernet management port:

Under the Management port is the Alternate Control Path (ACP) port. It’s an Ethernet port which, along with our SAS ports, provides connectivity to external disk shelves. The ACP connection is not mandatory but it is highly recommended. When used, the data plane traffic (the actual data reads and writes) is carried over the SAS connections, and the control plane traffic (control commands between the controller and shelf) are carried over the ACP connections. If ACP is not used, the SAS connections are capable of carrying both control and data traffic.

Next is an unused USB port (included for possible future functionality):

The port numbering is labelled on the back of the controller, so you can see for example the first two 10Gb Ethernet ports are ‘e0a’ and ‘e0b’. ‘e’ stands for Ethernet, and there is a ‘0’ to signify it is an onboard port. The ports are sequentially named and numbered ‘e0a’, ‘e0b’, ‘e0c’ etc.

If an expansion card is fitted in our of the expansion slots, for example if we put a four port Ethernet card in slot 1, those ports would be named ‘e1a’, ‘e1b’, ‘e1c’ and ‘e1d’.

The FAS8040 comes with two controllers for High Availability in a single 6U chassis.

Looking at the ports on the back of the FAS8040, starting on the left there are four SAS ports:

With the NetApp port naming convention, Ethernet ports start with an ‘e’ for example ‘e0g’, Fiber Channel ports are not prefixed with a letter, for example ‘0g’.

There are four expansion slots available per controller for additional interfaces:

Looking at the rest of the ports, next are four 1Gb Ethernet ports:

Then the Management port:

And finally the Console port:

As mentioned earlier, the controllers for the FAS8040, the FAS8060, and the FAS8080 look identical. They’re the same size and have the same ports on the back.

When deployed in a single enclosure, the FAS8060 is different than the FAS8040 in that it has more memory so it can handle more load.

The other option for the FAS8060 is to purchase it in two different chassis enclosures. With the two chassis option, the controller fits in the top slot, and underneath there is an IO expansion module which provides eight additional expansion slots.

When deployed in dual enclosures, the FAS8060 looks exactly the same as the FAS8080 EX:

When you buy the FAS8060 dual enclosure or the FAS8080 EX, it comes as two separate identical chassis. You will get two of the enclosures pictured above. There are eight expansion slots in the IO expansion modules, so that gives you an additional 16 expansion slots across the two chassis.

With the single chassis FAS8000 platforms, the High Availability connection between the two controllers is internal in the chassis with no need for external cabling.

Obviously this isn’t possible with the dual enclosure models because the two controllers are in separate chassis. The FAS8060 dual enclosure and the FAS8080 EX have two HA ports in the bottom right corner of the IO expansion module. The two enclosures are cabled together using these ports to provide High Availability.