In this NetApp training tutorial, I will cover NetApp Storage Pools. Scroll down for the video and also text tutorial. 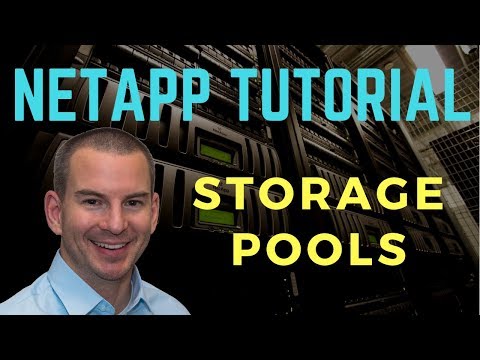 This is a feature that came out in ONTAP version 8.3 which makes more efficient use of the disk capacity of your SSD disks in Flash Pool aggregates. Flash Pool utilises a cache of SSD disks in front of your higher capacity spinning SAS or SATA drives to provide cost efficient improved performance for your recently accessed data.

Advanced Disk Partitioning (ADP) also became available in ONTAP 8.3 and it’s a fairly similar feature. Where ADP is used to get more efficiency capacity use from the disks that are used for system information, storage pools are used to get more flexible use of the SSD capacity that is used in Flash Pool aggregates.

The difference with SSD storage pools is that the disks are partitioned, so rather than a physical disk being tied to an individual Flash Pool aggregate, we can allocate slices from the same physical disks to different aggregates.

When an SSD storage pool is created the disks are partitioned into four allocation units which can be used in any Flash Pool aggregate on the node which owns the disks or its High Availability peer.

Note that they can’t be used in any node throughout the cluster, just the HA pair. If you had an eight node cluster and you wanted to use storage pools for Flash Pool aggregates on every node in the cluster, you would need four storage pools.

The image below shows the traditional way to configure Flash Pool without using a NetApp Storage Pool.

The diagram below shows the storage pool configuration.

Allocation units can be reassigned between controllers on the same HA pair. If you wanted you could have all four of the allocation units assigned to one node.

The main benefit we get from storage pools is the increased efficiency with our storage capacity, which means we can buy less disks. It leads to a larger failure domain however so you need to weigh up that trade-off. With the traditional setup a failed disk will only impact one aggregate, but if it’s a member of a storage pool it can affect many.

Want to practice the NetApp SnapMirror Engine features on your laptop? Download my free step-by-step guide ‘How to Build a NetApp ONTAP Lab for Free’