In this NetApp tutorial, you’ll learn about NIC teaming and how it works. Scroll down for the video and also the text tutorial. 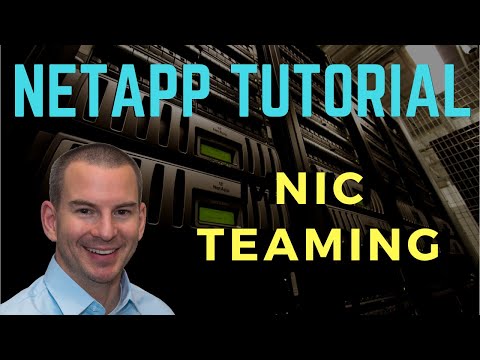 NIC teaming allows you to combine your physical NICs, which are your Network Interface Cards, into a single logical interface. This can be used to give you the benefits of load balancing and redundancy across multiple physical interfaces.

It also makes it difficult to figure out how the redundancy and the failover are going to work for your host connecting in. It’s much easier if you can just use that one IP address on both those network cards, so you need to do NIC teaming to be able to do that.

Depending on the documentation that you’re reading, there are many different names for NIC teaming. It can also be known as bonding, balancing, or link aggregation. Those are just different terms that all mean the same thing. So those are names when we’re talking about it on a server.

If we’re talking about bundling multiple physical ports on a switch into a single logical interface, we’ll call that either a port channel, etherchannel, or a link bundle. So, all of those terms basically mean the same thing.

I said earlier that the reason we do the NIC teaming is so that we can get redundancy, and optionally, load balancing. Our first option is we can do Active/Standby for the NIC teaming.

With Active/Standby, all traffic will go out one physical port. If that port fails, the traffic will automatically fail over to the other port, and for Active/Standby redundancy, you don’t need to configure anything on the attached switch.

Active/Standby gives us redundancy. One of the ports is always active. If it fails or if the actual cable it’s connected with fails, or if the switch port on the other side fails, then we’ll automatically fail over to the other physical port, still using the same IP address. So any client that is connecting to that host doesn’t need to change anything. It’s still connecting the one IP address.

The disadvantage of using Active/Standby, the good thing is it gives you the redundancy, but you don’t get any load balancing. Traffic is always going out only one interface at a time. So looking at the Active/Standby redundancy, you can see the same example again here.

I’ve got my physical server with the two physical network cards in there. I give it that one IP address, 10.10.10.10, on that logical interface. In our example here, all traffic is going out of that top port. It’s only if the top port fails, it will failover to the bottom port. When that happens, the switch will learn that the MAC address for that server, has failed over to the bottom port.

If you’re using Active/Active, for that one server, when it’s sending out, it can actually get up to 20 gigabits of bandwidth because it’s using double the interfaces, it’s using both of them. So Active/Active looks a lot better, right? So why would we ever use Active/Standby?

Well, the reason is for active/active teaming, the server on the attached switch that it’s plugged into both needs to see the physical ports grouped into a single logical link.

But when you’re using the Active/Active load balancing, the switch sees that this is one thing on the other side, one MAC address, so it needs to know that that one MAC address is reachable through the two different ports. So we need to have a protocol that’s used for the matching configuration on the server and on the switch.

The protocol that is used for that negotiation is either Static 802.3ad or Link Aggregation Control Protocol (LACP). LACP is the newer protocol. It’s got some benefits over static, so it’s preferred to use LACP. You can only do that if both the server and the switch support LACP.

You know how I was saying, why would you ever not use Active/Active? If a server supports Active/Active, but the switch doesn’t, then you can’t do that, but you could still use Active/Standby. Typically, modern switches will always support this.

With Active/Active redundancy, it looks exactly the same. With the outside world again, we’ve got those two physical NICs. We’ve got that one IP address on there, 10.10.10.10 on the logical interface.

With the Active/Active redundancy, the server can send out both ports at the same time. So we get double the bandwidth. We get the load balancing. If anyone port fields, all the traffic will just go out of the remaining port.

Option 1 – Switch Does Not Support LAG

Let’s look at the different options that we can use for NIC teaming. Option one, if this switch does not support link aggregation. The switch does not support configuring port channels. Well, you know the answer already. To do Active/Active, we need to have a matching configuration on the switch. So if a switch is not capable of doing that, we could use Active/Standby.

Those are normal access ports, and we don’t need to configure anything else. If the server does fail on the link that is active, the switch will learn automatically to use the other link to get to that server.

Our next option, option two, the switch does support link aggregation. In that case, we can configure Active/Active teaming on the server, and we do a matching configuration on the switch as well. If both the server and the switch support it, it’s preferred to use LACP.

If either one of them is older and only supports static, then we’d use static on both sides. Whenever you see a network diagram where we do have link aggregation, a port channel configured on a switch, you’ll see it drawn like this, where we draw a ring, a circle, around the interfaces that are in that port channel.

With options one and two, you notice there was a single attached switch. Let’s go back a slide. So I’ve got two network cards so that I don’t have a single point of failure.

However, they’re both plugged into the same switch. So this switch is a single point of failure. It would be good if we could plug the two different NICs into two different switches. That is possible as well. That’s option three.

With option three, we’ve got two switches here, but there’s no dual switch link aggregation support. So most modern switches, even if they’re not expensive switches, will support link aggregation when the server has got two ports plugged into the same switch.

However, typically, you’re going to need a higher-end switch if you want to have two switches with the same shared port channel going down.

To be able to do that, you need a higher-end switch, which is not supported on most of your office shelf switches that you can buy.

On the switches, we just configured them as normal VLAN access ports. It doesn’t know anything about there being in the NIC teaming on the server. On the server, we do configure NIC teaming there, but we configured it as Active/Standby. So all the traffic goes out either NIC1 or NIC2 unless it fails, in which case it fails over to the other one.

Finally, we’ve got option four, where we do have high-end switches that are capable of doing a shared port channel going downstream. So here on the server, we can do our Active/Active teaming again. Again, typically we will use LACP there.