In this NetApp tutorial, you’ll learn about ONTAP VLANs. Scroll down for the video and also the text tutorial. 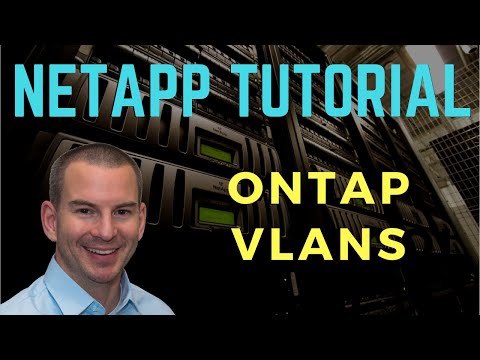 For example, let’s say that we’ve got DeptA and DeptB, we’ve created a separate SVM for DeptA and DeptB, and both departments are using CIFS, NFS, iSCSI and have got their Management traffic as well.

Then DeptB, they’ve got a logical interface with IP address 192.168.20.11, and it is homed on port e0d. As long as each of these physical ports had enough bandwidth to support the client, then that would be the ideal way to configure this particular scenario.

Therefore, on my routers and my firewalls outside the ONTAP system, I can create rules there that keep those two different traffic types separate from each other. So the IP address level, I’ve got them separated at Layer 3 of the OSI stack.

On the switch port that is connecting down into my ONTAP node, I configured that as a trunk. A trunk port will carry the traffic for both VLAN 10 and for VLAN 20. When traffic is tagged with VLAN 10, that’s going to hit my VLAN interface that I’ve created for DeptA.

Let’s look and see where we can use VLANs here. So maybe there wasn’t enough bandwidth really there for DeptA and DeptB to burst. Let’s say that I’m using 1 gigabit ethernet ports here. So here, DeptA and DeptB have both got 2 gigabits available to them, but maybe sometimes DeptA burst a little bit above that, and maybe sometimes DeptB burst a bit above that as well.

Well, here, we are physically limited to the maximum of 2 gigabits, so they wouldn’t be able to burst above it. Let’s look and see how we can use VLANs to allow them to occasionally burst above that 2 gigabits. So here, now I take my four interfaces on node one, e0c, e1a, e0d, and e1d, and I put those all into a single interface group now of a0a.

Now, obviously, I need to be careful here that one department doesn’t take all of the available bandwidth. Well, I can use storage QoS to do that, but this is a way that we can use VLAN interfaces to allow DeptA and DeptB to be able to burst above what they would have been able to if I was dedicating interface groups to each one. It still keeps them separate and secure from each other.

Guidelines for Setting up VLANs in Data ONTAP: https://documents.uow.edu.au/~blane/netapp/ontap/nag/networking/concept/c_oc_netw_vlan-guidelines.html