In this NetApp tutorial, you’ll learn about VMware terminology, which is specific to storage. That’s VAAI, VASA, and Multi-Path Plugins (MPP). Scroll down for the video and also text tutorial. 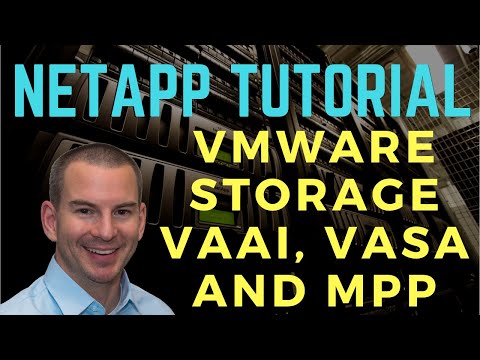 Starting off with VAAI, which is the vSphere API for Array Integration. This utilizes communication between the ESXi hosts and the storage system. vSphere can offload some functions to storage systems, such as virtual machine cloning.

So if you’ve got a virtual machine, which is already set up in vSphere, and you want to make a clone of that, you can use VAAI for that. Also, if you’re deploying a new virtual machine from a template and also Storage vMotion.

VAAI is built-in for SAN protocols on supported storage systems. For NAS protocols, it’s NFS that is supported by vSphere. That requires a software plugin to be installed.

With Storage vMotion, what you’re doing there is moving the virtual machines files from one datastore to a different datastore.

We’re going to do our Storage vMotion in this first example. We do not have VAAI enabled. When we do that, you can see that I’ve got my ESXi host, which is running VM1, and I want to move the virtual machine’s files from Datastore 1 to Datastore 2 on the same storage system.

With VAAI, it’s going to work for Storage vMotion. Also, other functions, like if we are cloning a virtual machine or deploying a virtual machine from a template. Again, that traffic won’t have to go through the ESXi host. It’s going to be done directly on the storage system. VAAI utilizes communication between the ESXi host and the storage system.

Then, your low-performance virtual machine that doesn’t require that high performance will get the lower performance capabilities.

This provides simplicity and reduces errors because you set up the storage policy once, then select it whenever you create a VM. So rather than every time you create a VM, you have to individually configure the storage settings for that VM. You just use policies that are set up ahead of time.

Then, when you provision the VM, you just specify the profile that you want to use. So rather than doing it individually each time, you’re going to get more consistency there. Thus, you’re going to have less errors, and that’s going to mean that you have to do less troubleshooting.

Health and capacity information can also be provided to vSphere as well. That information can be viewed from the vCenter server, rather than having to see it on the storage system, which can make administration easier.

The last one that I want to talk about here is MPP, which is Multi-Pathing Plugins. MPPs allow SAN storage traffic to flow over multiple paths. There are two components of MPPs, that’s PSPs and SATPs.

SATP is the Storage Array Type Plugin. That handles failover and error detection. If a path goes down, we’re going to need to detect that it’s gone down and failover to another path. It’s SATP that handles that.

PSA is the VMware Pluggable Storage Architecture. This is a collection of APIs that allow storage vendors like NetApp to design their own MPPs, PSPs and SATPs, which optimize load balancing and failover, and are specifically designed for their storage systems. So it’s the best settings optimized for that particular storage system.

NMP is the Native Multipathing Plugin. That is the default MPP from VMware, which is built into ESXi hosts.

Path Selection Policy and Storage Array Type Policy can be found in the vSphere settings for an ESXi host connection to a datastore.

What VAAI offloaded operations are supported by Data ONTAP?: https://kb.netapp.com/Advice_and_Troubleshooting/Data_Storage_Software/ONTAP_OS/What_VAAI_offloaded_operations_are_supported_by_Data_ONTAP%3F