In this NetApp training tutorial, I will cover the NetApp FlexClone. Scroll down for the video and also text tutorial. 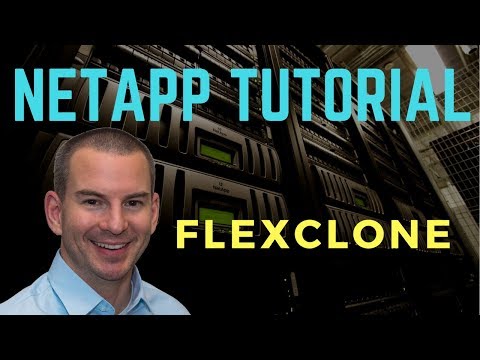 This course has played a pivotal role in my success. Yesterday I was offered the opportunity to work as a Technical Support Engineer for NetApp. Passing my NCDA was what really helped my career take off.

A FlexClone volume is, not surprisingly, a clone of another volume. The feature is most commonly used for deploying a virtual desktop environment or for development and testing. Both the parent and child appear on the ‘Volumes’ page in System Manager and can be managed separately.

The child FlexClone volume consists of the same data as the parent volume when it is initially created and you can then make independent changes to both.

Let’s say you want to do some testing on a large database. The traditional way to do this would be to make a copy of the database. It will take time to copy the data to new blocks on disk, and take up double the initial disk space.

FlexClone works differently. The system takes a snapshot of the parent volume. This works the same as any other snapshot in that it just includes pointers to the data, rather than copying it to new blocks on disk. Because no data needs to be written (apart from the tiny inode file), the snapshot occurs instantly and takes up no disk space.

Multiple clones can be taken of the same parent volume, so if you need to do additional testing while keeping the first FlexClone volume unchanged, just make another FlexClone volume. Because of the shared blocks both the parent and FlexClone volume are located in the same aggregate. Over time the FlexClone volume can change enough that it is more different than similar to the parent volume. At this time you can choose to split them into two completely physically separate volumes. Doing this can take some time as the shared data blocks will be split into two separate copies which requires them to be copied to new blocks on disk for the child volume.

Want to practice NetApp FlexClone on your laptop? Download my free step-by-step guide 'How to Build a NetApp ONTAP Lab for Free'