In this NetApp tutorial, you’ll learn about FlexVols. That’s our Flexible Volumes. Scroll down for the video and also text tutorial. 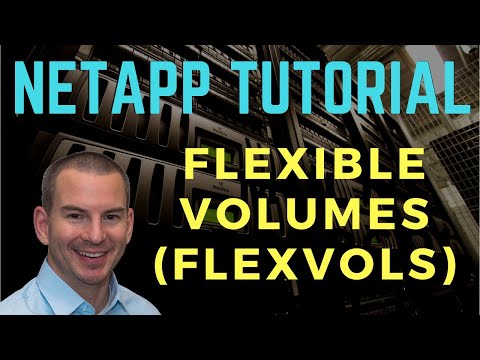 Volumes are the lowest level in the ONTAP architecture that clients can access data at. When we talk about volumes in general, we’re talking about flexible volumes.

So, if it was one volume, one aggregate. You could not put multiple volumes in the same aggregate, and if you wanted to resize the volume because it was tied to the aggregate you had to physically add or remove disks from that aggregate.

FlexVols break that one-to-one relationship between an aggregate and a volume, therefore, now you can have multiple volumes in the same aggregate. The way that they work now uses thin provisioning to allocate more space to the volumes than is actually physically available in the underlying aggregate.

For example, you have got a 20 TB aggregate. You can make it look to the clients that there is 50 TB of available space there. You can make the amount of space look bigger than it is, and this allows you to buy the physical disks just when you need them.

Another thing you can do with your FlexVols is you can non-disruptively grow, shrink, and move them. All of those things you could not do with traditional volumes FlexVols are much more flexible. That’s why they’re called flexible volumes.

How Volumes are Allocated Space in an Aggregate

SVMs got their own set, but are independent namespaces, so there’s no problem to have a Volume 1 in SVM1. We could have another volume with the same name, Volume 1, in SVM2 as well. Since aggregates work at the cluster level, they’re not assigned to a particular SVM. We can have different volumes from different SVMs all using shared aggregates.

Flexible volumes are the basic building block of data management. They can be non-disruptively moved or copied between different aggregates. They can be cloned and they’re the unit of replication for SnapMirror and SnapVault.

A new feature is the aggregate deduplication is also supported just on AFF systems. Volumes are very important in ONTAP and the basic unit for most management.

Each SVM has its own unique namespace, which is its directory structure. When you create a data SVM its root volume is created. Each data SVM has got its own independent root volume and namespace. No user data should be placed in an SVM root volume. It’s possible to do that, but it’s bad practice to do so.

To build the namespace, volumes within each SVM are related to each other through junctions and are mounted on junction paths. The root volume resides at the top level of a namespace hierarchy. Additional volumes junction paths lead back to the root volume, and when NAS protocol clients connect to a volume, volumes lower in the tree are visible at subdirectories.

So how are the volumes are going to be visible to NAS clients? In the example below, we’ve got two different SVMs. We’ve got Dept A SVM, it has a root volume, and it’s got Volume_1 and Volume_2 under. We’ve also got Dept B SVM. It has its own root volume, and it’s got its own volume structure under there. Obviously, the SVMs and the volumes will have been created by you, the administrator.

To be able to do that you need to have shared the root volume. So, that’s been done, the user has mapped the drive, and because you’ve got these volumes underneath there the user will see that namespace as a directory structure underneath where they have connected.

They do not have any visibility of anything higher up in the tree or hanging off of different branches, so they can’t see the root volume, they can’t see Volume_1, and they cannot see Volume_x. That’s how it looks for our NAS clients.

Looking at SAN clients, our LUNs go into either a volume or into a QTree. In the example below, the administrator has created LUN_1, and we’ve put it in Volume_y. Then, we’ve got a SAN client which is using LUN_1.

When you create a volume in System Manager, that volume is going to be automatically mounted directly under the SVM root volume. You can change the junction path later if you want to.

When you do create a volume in the command line it is going to be unmounted by default, meaning it is inaccessible to clients. For clients to be able to access a volume, you need to create the volume. You also need to mount it into the namespace, and you need to configure your NAS protocol to make it available to clients.

With the command line, it’s not mounted by default. You need to explicitly do that. You can optionally do it as part of the ‘volume create’ command when you first create the volume. When you do that, you use the ‘-junction-path’ field as part of a volume create command.

The last thing to talk about in this lecture is the data SVM root volumes versus the node root volumes. It’s really easy to get confused between the two. We’ve got the cluster and we’ve got also the node SVMs as well, one for each node. We’ve got Vol0, which is where the system information is saved, and that is associated with our node SVMs.

The information is replicated between all the Vol0’s and all the nodes in the cluster, and node user data can be stored in Vol0. It’s just used for system management.

Whenever you hear me talk about it, I just call it Vol0 because I think that’s clearer, but in other documentation, you’ll often see that being described as the node root volumes. We can compare that with our SVM root volumes for our data SVMs. 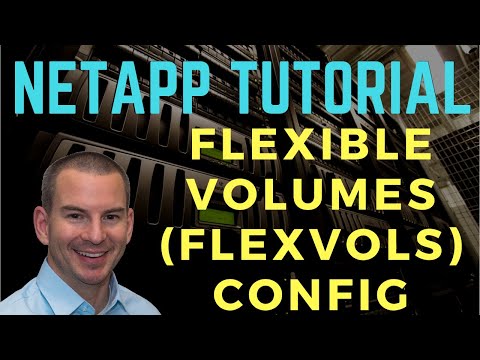 3. Verify the volume was created and mounted successfully.

4. Create a 2nd 100MB volume named DeptA_vol2 in the DeptA SVM, using aggregate aggr2_C1N1. Do not enter any configuration to mount the volume.

5. Verify the volume was created successfully.

6. Verify where the volume is mounted in the SVM namespace.

The volume is not mounted in the namespace by default when created using the CLI.