In this Cisco CCNA tutorial, you’ll learn about the upper layers of the OSI model. That’s the upper three layers, 5, 6, and 7. Scroll down for the video and also the text tutorials. 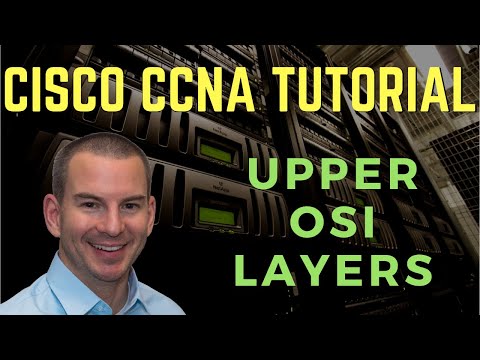 Network engineers don’t typically work directly with those upper three layers of the OSI model. They’re more relevant to application developers, but we still need to know what they do. And for the exam, we need to know the definitions of each of the layers as well. It’s quite likely that you’ll be tested on that.

In this tutorial, I will be giving you the Cisco definitions, so you’ll be ready for the exam. The information included in the upper layers would include the Message Body and the Subject Line in an email message, for example.

So let’s look at the three top layers starting with Layer 7, the Application Layer. This provides network services to the applications of the end user. It differs from the other layers in that it does not provide services to any other OSI layer.

So the Application Layer establishes the availability of intended communication partners, not just a straight line going to the other host. It then synchronizes and establishes agreement on procedures for error recovery and control of data integrity. Data integrity means checking that data has not been altered or corrupted in transit.

The Presentation Layer can translate among multiple data formats using a common format. For example, it might need to do this for computers with different encoding schemes.

The last layer of our upper layers is Layer 5, the Session Layer. This establishes, manages, and terminates sessions between two communicating hosts. The Session Layer also synchronizes dialogue between the Presentation Layer of the two hosts and manages data exchange.

For example, we might have web servers that have got many users that are using that web server. So, in that case, we would have multiple incoming sessions.