In this Cisco CCNA tutorial, you’ll learn about the bottom four OSI Layers and their definitions. Scroll down for the video and also the text tutorial. 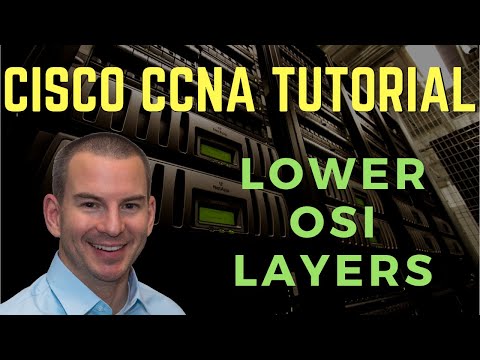 We’ll start with Layer 4, the Transport Layer. The main characteristics of this layer are whether TCP or UDP transport is going to be used and the port number. If we want the communication between the two hosts to be reliable, then we’ll use TCP.

If speed is more important than reliability, like for voice or video of traffic, then we’ll use UDP instead. The other main characteristic of this layer is the port number, for example, port number 80 for HTTP web traffic, port number 25 for SMTP email.

Layer 4, Transport Layer, defines services to segment, transfer, and reassemble the data for individual communications between the end devices. It breaks down large files into smaller segments that are less likely to incur transmission problems.

The next layer is Layer 2, the Data Link Layer. The most important information here is the source and destination Layer 2 address. Again, just like with Layer 3 and 4, other pieces of information are also included in the Layer 2 header.

With Ethernet, which is what is always used in our Local Area Networks, it’s the MAC address that is used here. Switches operate at Layer 2. Our switches are Layer 2 aware devices.

The definition for Data-Link Layer, it defines how data is formatted for transmission and how access to the physical media is controlled. It also typically includes error detection on correction to ensure reliable delivery of the data.

Finally, we have Layer 1, the Physical Layer. This concerns literally the physical components of the network. For example, the actual physical cables being used. Physical Layer enables bit transmission, the 1s and 0s, between end devices.