In this Cisco CCNA tutorial, you’ll learn about the TCP/IP suite, and how it compares to the OSI Model. Scroll down for the video and also the text tutorials. 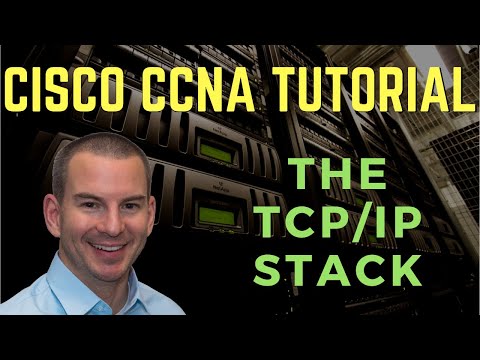 TCP/IP was developed way back in the 1960s by the US Department of Defense’s (DoD) Advanced Research Projects Agency (ARPA). It’s a protocol stack that consists of multiple protocols, including TCP, which is the Transmission Control Protocol, and IP, which is the Internet Protocol.

So it’s not a single protocol, it’s a protocol stack. What a protocol is, if you think of diplomats, when diplomats from different countries meet each other, there’s a certain way they’re expected to behave and to communicate with each other.

In computer networking, protocols basically mean the same thing. So, if you got two hosts and they’re going to communicate with each other, there’s going to be a protocol which is going to control how that communication should behave, how it should work. TCP/IP, it’s the main protocol stack used in computer operations today.

There used to be other computing protocols way back in the day, like IPX/SPX and AppleTalk, but they’re really dead now. TCP/IP is now ubiquitous. And whereas the OSI reference model is conceptual, the TCP/IP stack is actually used to transfer data in today’s production networks.

TCP/IP is also layered, but it doesn’t use all of the OSI layers, though the layers are equivalent in operation and function. So it does actually use them, but in the documentation, it only lays out four different layers. Let’s look at those now.

Comparing the OSI Model with the TCP/IP Stack

You can see on the slide here over on the left, we’ve got the OSI model that we covered in the last lesson. So, we’ve got the seven layers there. Remember, a way to remember the easy way is “Please Do Not Throw Sausage Pizza Away.” You’ve got Physical, Data Link, Network, Transport, Session, Presentation, and Application.

Now, you know I was saying in the last lesson that it’s really important to understand the OSI model. The TCP/IP Stack, for sure if you’re working in networking, you’re going to know all the different protocols, like TCP and IP, like the back of your hand. But when we’re talking to other network engineers, it’s more commonly the OSI model that we’re going to be referencing.

Moving on, looking at some host communications terminology. So when two hosts talk to each other, they’re going to be exchanging PDUs, Protocol Data Units. The PDU is the entire communication all the way from Layer 7 down to Layer 1 of the OSI stack. We can also divide that into different terms depending on which layer of the TCP/IP suite we’re talking about.

You notice in the last slide that we’re saying, typically, real world, we’re not going to be discussing the TCP/IP stack like this, about the four layers. More commonly, we’ll use the OSI 7 Layers, but on this slide, the terminology actually is commonly used.

So really, the correct term is a PDU, but in day-to-day conversation, often we’ll just call communications between two hosts a Packet, meaning the entire stack.