In this Cisco CCNA training tutorial, you’re going to understand how we can implement submitting. Scroll down for the video and also text tutorial. 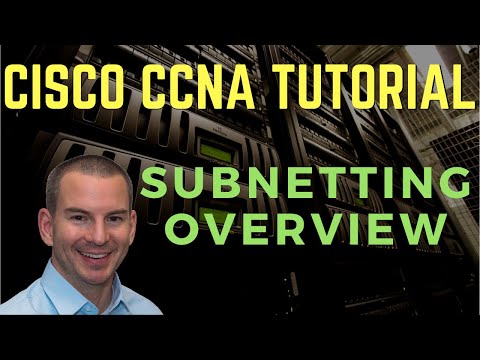 Subnetting is a really important topic, not just for passing the CCNA exam, but for networking in general. It’s one of the core knowledge areas that you need to understand if you’re going to work in networking.

To understand this lecture, you need to think about it from the context of the originally intended IPv4 design where all hosts which can communicate on the Internet have a public IP address.

If you’re already working in a company where you’ve already got exposure to working on the network, the chances are your company is using private IP addresses. As we go through these lectures, do not think about it from that point of view.

We’re going to get into private IP addresses later and I’ll also explain how modern-day networks work. But before we get there, you need to understand how IPv4 worked in the first place. It’s a natural progression.

For example, we’re a network designer for a small business with four departments that are spread over two offices. We want to manage our own public address space and we could buy four separate Class C networks for that.

The problem is that public IP addresses cost money. Rather than buying separate networks from the internet authorities, we could purchase a single range and subnet it into smaller portions.

Let’s say, we’ve only got a handful of hosts in each of those departments. Rather than buying 256 addresses for each, we can buy a single Class C range. Then, we can divide that network up into smaller networks and assign it to the different parts of our networks.

For example, we’ve got a Class C range 200.15.10.0/24. We subnet it to divide the network into smaller subnetworks. To do that, we would need to borrow some host bits and add them to the network portion of the address.

When subnetting, the line always moves to the right. The further to the right we go, the more subnets that we’re going to have but the less the amount of hosts that we’ll have on each subnet.

Calculating the Number of Networks

To calculate the number of available subnets that we’re going to get by moving the line to the right, we use a formula of 2 to the power of borrowed subnet bits (2borrowed bits). If a Class C network uses a /28 subnet mask, then we’re borrowing bits from the default Class C subnet mask of /24.

To determine the borrowed bits, we get the difference between /28 and the default /24, which is equal to 4. We then calculate how many subnets we’re going to get by substituting the borrowed 4 bits into the formula. Therefore, 24 is equal to 16 subnets.

An easy way to calculate the number of subnets is to do it with your fingers. Start with two, then double. So I go 2, 4, 8, 16. I’m going to have 16 available subnets for the 4 borrowed bits.

Another example, if a Class B network uses the same /28 subnet mask, we’ll subtract the default subnet mask for Class B which is /16. So we’ve got 12 borrowed bits. To see how many subnets we’re going to get, it is going to be 212 and that would be 4,096 subnets.

Remember that hosts on different subnets need to go via a router if they want to communicate with each other. That’s the whole point of our IP addressing and subnetting, to divide our network into different logical parts of the network. The routers know how to get everywhere and that can direct the traffic.

Calculating the Number of Hosts

To calculate the number of hosts, it’s 2 to the power of how many hosts bits then minus 2 (2host bits– 2). We need to subtract 2 because we’ve got the network address and the broadcast address that cannot be assigned to a host.

So if a Class C network uses a /28 subnet mask, then we’ve got 4 bits left for hosts. There’s a total of 32 bits in the address and we subtract 28 for the network portion. That leaves us 4 bits for the host portion.

Using the formula, 24 is equal to 16, minus 2 for the network address and the broadcast address, giving us 14 available addresses for our hosts. If we’ve got a Class B network and it’s using a /28, we also have 4 bits left for our hosts. That would be 24 which is 16, minus 2. It will give us 14 addresses, the same with our Class C with /28.

A quick note on the ‘ip subnet-zero‘ command, just like we have to subtract 2 to get the number of valid hosts, back in the day, we also used to subtract 2 from the number of available networks. Because in the original internet standards, it wasn’t allowed to use network bits of all zeroes or all ones, just like we can’t use host bits of all zeroes or all ones.

So that took away two of our available subnets. However, there wasn’t any practical need for that and it wasted address space. With the host bits, there’s a practical need for it because we’ve got that network address and the broadcast address that is used.

On Cisco routers now, there’s a default command of ‘ip subnet-zero‘, which disables such behavior. The command is enabled by default, so those two extra network addresses are available in Cisco networks.

I must tell you this because you may look up something on the Internet or in a subnet calculator and it might tell you that there are 14 networks available on Class C with a /28, for example, when I’m telling you that there’s 16.

With Cisco networks and for the CCNA exam, do not take two away from the number of available subnets. I want to tell you about it so that you won’t get confused if you’re looking up anything on the Internet.