In this Cisco CCNA training tutorial, you’re going to learn about CIDR, which is Classless Inter-Domain Routing. Scroll down for the video and text tutorial. 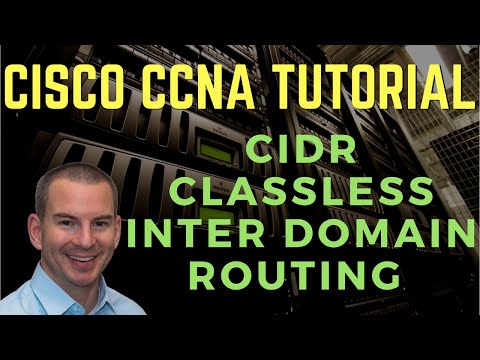 A problem with the original implementation of the classful addresses was that when the Internet authorities give out addresses, they always give out complete:

This gave a problem that if a company had more than 254 hosts, let’s say 500 hosts, is too big for a Class C. So, they would be given a Class B and they would get allocated addresses for 65,534 hosts.

That’s way too much and this led to huge amounts of the global address space being wasted. As a solution, Classless Inter-Domain Routing or CIDR was introduced in 1993.

CIDR removed the fixed /8, /16, and /24 requirements for the different address classes and allowed them to be split in smaller networks called subnetting.

Rather than giving a huge range, we split the classes into smaller networks that could be given to different organizations. Companies can now be allocated in an address range that matches what they need, therefore, there would be fewer addresses getting wasted.

The benefits we get from route summarization is that ISP A doesn’t know about all 256 networks behind ISP B. It only gets a single summary route that covers all of them.

One route compared to 256 routes, is a lot less information, more efficient, and it takes up less memory in the router. If an individual link goes down in ISP B, it doesn’t have any impact on ISP A because that one summary route doesn’t change.

It’s going to be different in ISP B though. Whenever one of their routes goes down, the other routers are going to have to recalculate that.

The benefit we get from this is we’re compartmentalizing the different parts of our network. If we’ve got an issue in ISP A of the network, it’s not going to impact ISP B. It makes things a lot more stable and reliable. It also makes things more logical, which is better for us humans because it makes it easier to troubleshoot related problems.