In this Cisco CCNA training tutorial, we’re going to work through a subnetting practice question. Scroll down for the video and also text tutorials. 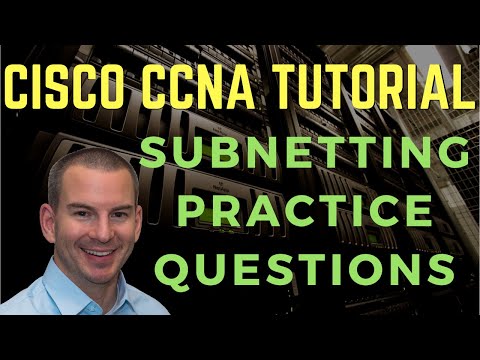 What are the network address, broadcast address, and valid host addresses for the IP subnet of which the host is a member of?

And the second part of the question – what is the subnet mask in dotted-decimal notation?

The second part of the question was, what is the subnet mask, /26, in dotted decimal? The way to do this when you’re first learning subnetting is to write out the bit pattern at the top of a piece of paper.

Proceed to the next octet, until you’ve written down the bit pattern for the four octets in a subnet mask. Like this:

The subnet mask in our example question is /26. Under your bit pattern at the top of the paper, write out 26 ‘1’s underneath starting from the left side. Then, you can fill in the remainder with ‘0’s for the host portion of the address:

Then we can just add up the ‘1’s to find the subnet mask in dotted decimal notation.

Let’s look at what the other part of the question was. What is the network address, the broadcast address, and a valid host address for the IP address, 198.22.45.173/26?

Again, we use our piece of paper and we’re going to write out the IP address in dotted decimal notation now as well.

Starting from the ‘128’ bit on the left, write down a ‘1’ under the bit if it adds up to less than the number in the IP address. Let me explain.

We got to the exact number so we have finished calculating this octet. We can write a ‘0’ down for all remaining bits, which is just the final ‘1’ bit at the end in this case.

We then repeat the process for the other 3 octets in order to write out the entire IP address 198.22.45.173 in dotted decimal notation:

So that’s the first part of the question done. Next up is to figure out the broadcast addresses.

The broadcast address is the final IP address in this IP subnet, which is one less than the network address of the next IP subnet.

Looking at the line which demarcates the network and hosts portions of the address, we can see that it is after the 64.

So the IP subnets are going up in increments of 64, and as you can also see from the red line we are subnetting on the 4th octet.

To calculate the next IP subnet we add 64 to the octet we are subnetting on, which is the 4th octet in this case.

Now we’ve got the network address and the broadcast address.

A final important point to tell you here is, notice that all our calculations were done on the octet where the subnet line is. This example is a /26 so that is in the 4th octet. So we don’t actually need to worry about the first three octets. They are always going to be unchanged as 198.22.45 in our example.

Where to Get More Subnetting Practice 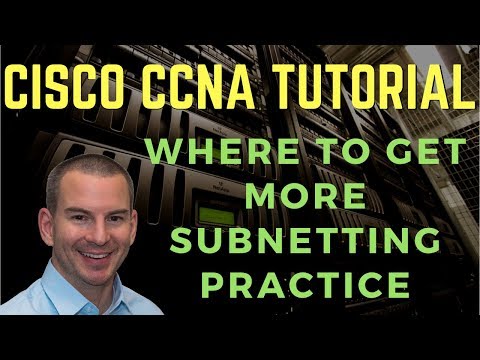 If you’re still not sure and want more practice, then a great resource for subnetting practice questions is subnettingpractice.com

The website has the same type of questions that you’ll see on the CCNA exam. Every time you refresh the page, it will come up with a new question. It has variations on everything that’s subnetting related, so you should be confident that you can answer any of these questions after some practice.

I recommend you don’t spend hours practicing subnetting in one sitting, that’s no fun for anybody. To get ready for the exam, you can just pick your favourite practice site and spend five or 10 minutes a day working through a few problems.

If you do that for days or even weeks before the exam, you’ll be fine when you get those subnetting questions. Another thing to tell you is that in the real world, people don’t do subnetting in their head (if that wasn’t obvious already).

What we do is we use an online subnet calculator, they’re easy to find in Google.

Subnet calculators are quick and convenient to use when you need to do real world subnetting, and they’re also very useful to check your answers when doing practice subnetting questions. Just plug in the numbers, and it will give you the answer.

Here’s how we would verify our answers to this question at subnet-calculator.com