In this Cisco CCNA training tutorial, I’m going to give you an overview of Quality of Service (QoS). When people talk about QoS in general, they’re usually referring to queuing. Scroll down for the video and text tutorial. 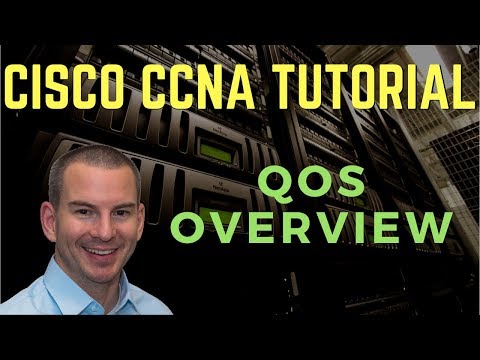 The original driver for QoS was voiceover IP. The reason why there was a need for quality of service is that back in the day (and some networks today as well), there was a dedicated voice, video, and data networks.

Some companies might not have video, but for sure they would have data and voice.

In the diagram above, the three networks for voice, video, and data are completely and physically separate from each other:

If there’s a problem with one of the networks, it’s not going to affect the other two.

Now, what you’ll find most often in modern networks are converged networks. The company is running voice, video, and data all over the same underlying physical network infrastructure.

In the diagram below, we’ve got IP phones on the desks and they’re going to be connected to an IP PBX, like the Cisco Unified Communications Manager.

We’ve got IP video endpoints as well, and we’ve got our standard IP servers and workstations. Everything is connected to the same underlying network which is running over an IP infrastructure.

In the dedicated networks, we were able to call external people like customers and suppliers through the phone company. In converged networks, everything is on the company’s corporate IP WAN, therefore, they can send data, voice, and video, and make phone calls between offices.

But to be able to call customers or suppliers, we’re going to still need to be connected to the local phone company as well.

For that connection, it could be using:

What’s important here is that the voice, the video, and the data is all running over that same shared network infrastructure between the different offices.

On old traditional networks, data, voice, and video had their own physically separate network infrastructure, and they did not impact each other. If there’s a problem with the data network, it is not going to affect the voice network. People can still make phone calls normally.

For example, with modern video endpoints, they can integrate with other collaboration software. They can be utilized in shared presentations over WebEx and the network. It can also integrate with call centers, etc.

It gives lowered costs and increased features, but a potential problem with this is that data, voice, and video are all fighting for the same shared bandwidth on the same shared physical network.

Quality Requirements for Video and Voice

Voice and video have quality requirements. For voice and traditional standard definition video packets, the recommended requirements to be called as an acceptable quality call are:

Those are one-way requirements, meaning, a packet sent from a phone in the HQ has 150 milliseconds to reach the phone in the branch, and vice versa.

The packets have 150 milliseconds to make it to the phone in the branch. Also, the jitter should be no more than 30 milliseconds. Jitter is variation in delay, for example, we’ve got multiple packets going from the HQ phone to the branch phone. The delay between the first or second and the third packet varies, that is your jitter.

Your IP phones have got a built-in jitter buffer. They don’t immediately play the packets out to your ear because there’s always going to be some jitter there. It would sound jittery if they did that, so the IP phones will smooth out the rate of the packets being received to make it sound natural.

If the jitter goes above 30 milliseconds, it’s going to overrun that built-in jitter buffer, and it’s going to make it a bad quality call.

You’ve all seen bad quality calls. If you watch a news report coming from a war zone or somewhere like that, usually, they’ll be using a satellite phone. Satellite is famously a highly ANSI connection, that’s why when you see the news report, they always make the apology at the start about the quality of the call.

If you don’t meet those requirements for your voice and your video, it will be:

FIFO First In First Out

Congestion can be experienced whenever packets can be coming in quicker than they can be sent out. An example would be, on your WAN edge router, you’ve got a fast interface on the inside and a slower interface on the outside.

You would typically see congestion on:

We’re going to use WAN edge router as an example because that’s where we’re going to see the main effective congestion and where QoS can help the most as well.

We have the HQ on the left and the branch office on the right. The HQ router will be used to send traffic from left to right, to the branch.

Let’s look at what happens when we don’t have congestion. We’ve got traffic coming in on the inside interface on that router, which is going over to our external offices. Because we’re running a converged network, we’ve got both voice and video and data packets are going to be coming in.

In our example, the traffic is coming in at a rate of fewer than 2 Mbps. The office isn’t very busy, therefore, the router can send traffic out immediately as it is received. In that case, there is no congestion at all.

Traffic is passing very quickly through the router. We’re not going to have any problems there but, we get a problem when traffic comes at a rate higher than 2 Mbps.

What order do our packets going to come in? It depends on what people are doing.

Packets are going to come in whatever order the users are taking those actions. Since the traffic is coming in at a rate faster than 2 Mbps, the router can’t keep up and can’t send packets out quickly enough.

When that happens, the router will buffer traffic, and the packets will wait in the queue to go out. The default queuing mechanism is that traffic gets sent out in the same order that it comes in. It’s first-in, first-out.

Whenever you’ve got packets being queued up, that is congestion. It causes:

Our applications and voice and video calls will be of unacceptable quality if they do not meet their delay jitter and lost requirements.

Having queues in the router is going to cause our voice and video packets to not meet their needed requirements, therefore, causing bad quality calls.

When you’re working in IT, this is going to give you a big issue. Back in the day when voice and video went on their separate dedicated networks, users are used to picking up the phone and making phone calls which are always in good quality. Hence, you have to provide the maximum quality of modern networks as well.

How to Mitigate Congestion

So how can we mitigate congestion? The easiest way is we can add more bandwidth. If we had a 100 Mbps interface on the outside as well as on the inside, then whenever traffic comes in, we can send it out immediately.

The problem is that it costs money. The outside interface is connected through your service provider, and the more bandwidth you want, the more money they’re going to charge you for it.

It’s the same scenario where we’ve got traffic coming in at a rate higher than 2 Mbps. The data packet comes in first, then a little voice packet, then two data packets, and then a voice packet.

The traffic goes in the queue, but the difference is we’re going to put our voice packets straight in the front of the queue whenever there is a queue in the router.

So what are the effects of doing this? For particular traffic, it reduces the following:

You’re also going to give better service to your voice and video traffic and maybe some mission-critical applications.

The original driver for QoS was VOIP, but it can be used to give better service to your important data applications as well. The thing is, if you’re giving one type of traffic better service on the same link, the same bandwidth you had before, then the other traffic types must get worse service.

Our voice packet will be moved in the front of the queue, but our data packets will be moved further back. The voice is going to get better service, but data gets worse. The point is to give each type of traffic the service it requires.

If a user is trying to open up a webpage on the internet and it takes one second rather than half a second, the user’s not going to notice the difference.

But if you’re on a phone call, and somebody’s voice starts getting jerky, there are gaps in it, and you can’t understand it, then that’s a big deal. It means that the phone call doesn’t work.

It’s important to give voice and video really good service so it gets the quality it requires. It doesn’t matter if data gets a little less quality service because users won’t notice it anyway.

QoS is not a magic bullet, and it’s designed to mitigate temporary periods of congestion. If a link is permanently congested, then you’re going to have a bad quality voice, video, and applications on that link. So what you need to do is upgrade the link.

What you’ll often see that companies do is they have a target utilization. They’ll look for an average utilization of 80% on the link, but you know that the network gets busier at some times of the day.

Monday at 9:00 AM is probably busier than it is at 3:00 PM on a Friday. You could put in enough bandwidth that the link never gets congested, but that would be expensive. So what you can do is balance the cost by having the link running at, for example, 80% utilization on average.

It will sometimes burst up to 100% and the link will be congested. For those temporary periods of congestion, you can enable QoS so your voice, your video, and data applications get the service that they require.