In this Cisco CCNA training tutorial, you’ll learn about how BGP (the Border Gateway Protocol) routing works within service providers. Scroll down for the video and text tutorial.

This is the 2nd in a series of BGP tutorials.

Part 4: How to Advertise BGP Routes on Cisco Routers 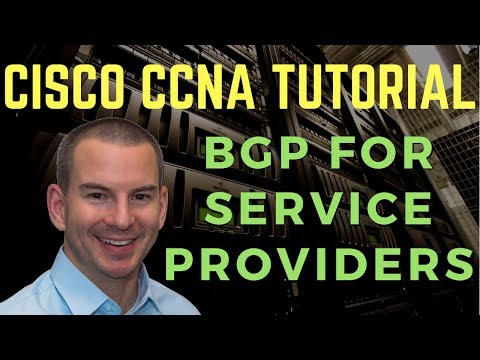 The slide below is the last slide you saw in the previous tutorial. 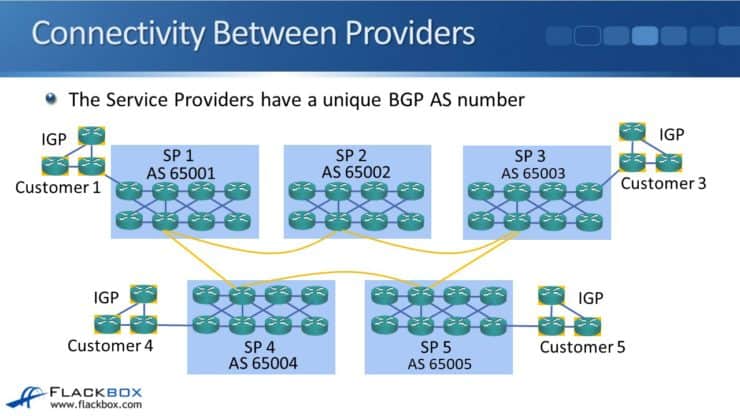 BGP (Border Gateway Protocol) is a path vector routing protocol. By default, it makes routing decisions in a way that is similar to RIP (which uses physical hop count, the total number of routers in the path). However, rather than choosing the path with the shortest hop count, BGP chooses the path with the shortest AS path. In other words, BGP chooses the path with the least amount of ASes from the source to the destination. It doesn’t care about physical router by router hops within those other ASes. BGP routers are not aware of the individual physical hops that traffic takes as it moves through another AS. They just see another AS as one single hop. This makes BGP much more scalable than if it were aware of  every router, physical hop by physical hop.

We’ll use this simple example to demonstrate how BGP works: 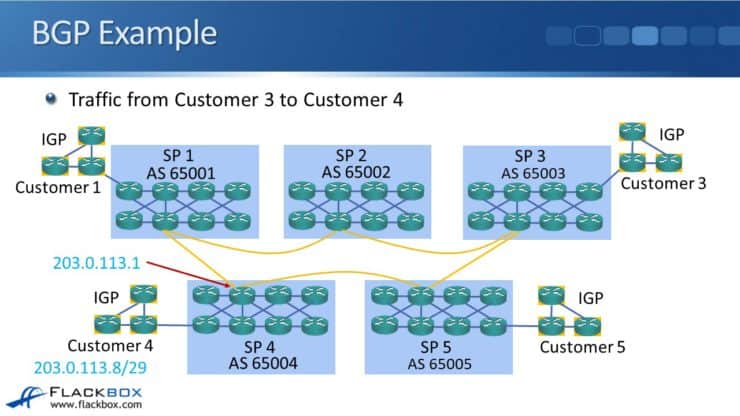 If you’re wondering why I used 203.0.113 and subnetted it into smaller chunks for all of the examples, it’s because that range of IP addresses is designated by the Internet authorities to be used for documentation. When I’m talking about internet routing, I want to use IP addresses that are public, not private. That’s why I’m using this range. It’s just a single /24 network, so I have to chop it up into smaller subnets for the example.

The customer has been allocated 203.0.113.8/29 by their service provider, SP4 using AS 65004. In our example, we need to advertise that route out to all of the other service providers, including Service Provider 3, which is where Customer 3 are connected. 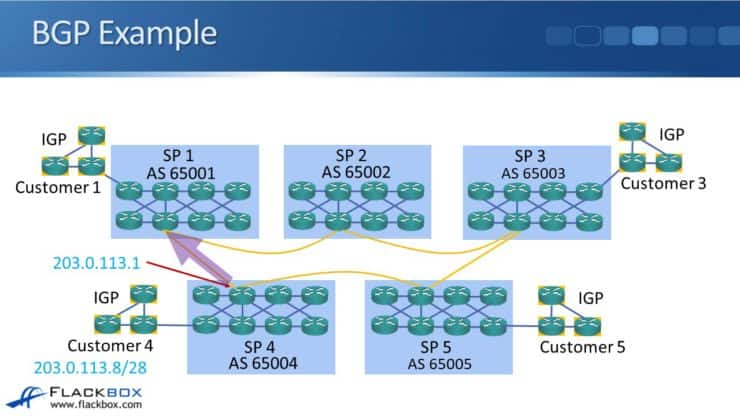 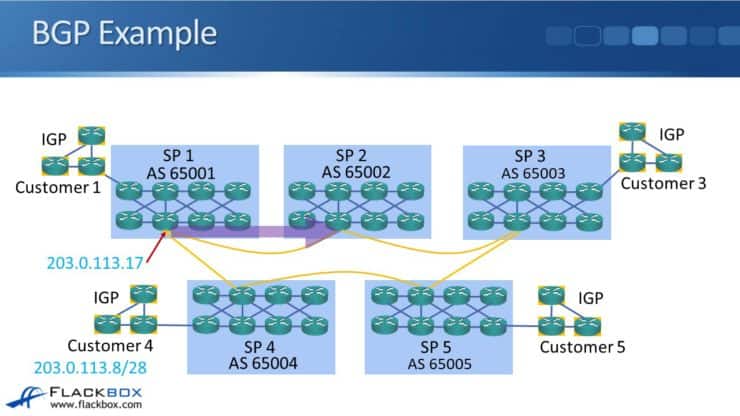 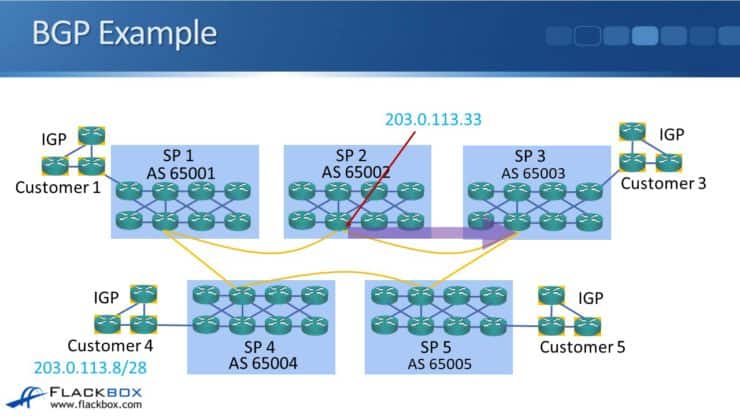 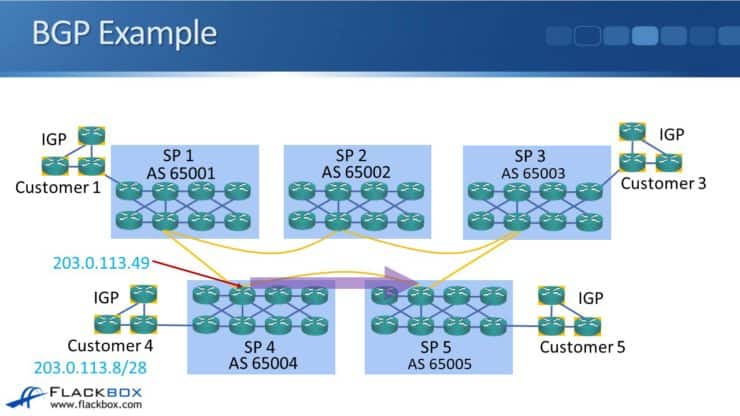 At this point, SP3 has learned how to get to Customer 4 over the top path. But we’ve also got the bottom path – 203.0.113.8/28 is going to be advertised along the bottom path as well. SP4 doesn’t just advertise the route to SP1. SP4 also has a BGP relationship with SP5. SP4 will advertise the routing information to SP5 as well. There is one link going to SP1 and a different link going to SP5, so the link to SP5 is going to have a different IP address (203.0.113.49, in our example). 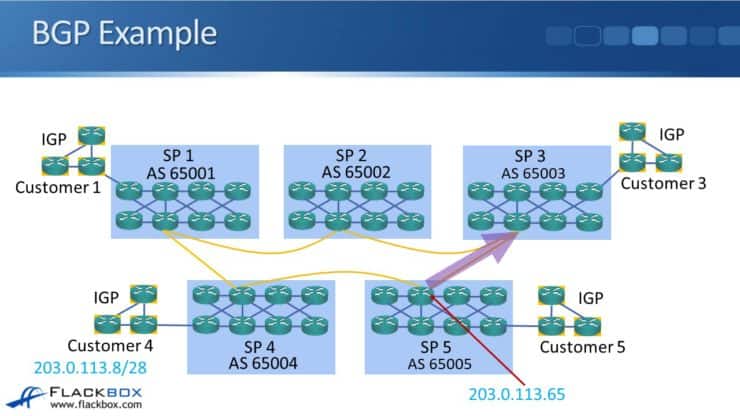 The BGP table functions in BGP like the OSPF database functions in OSPF. All routes learned from BGP go into the BGP table. But, just like with an IGP, only the best route will be placed into the routing table and actually be used. The routes are compared based on the number of ASes the traffic must go through to reach the destination.

Again, both paths will be visible in the BGP table on SP3, but only the best path is inserted into the routing table on SP3.

You can see that this is similar to RIP in that it uses the shortest hop count. But, rather than a hop being an individual physical router, a hop is the entire AS of another service provider. A router is not aware and doesn’t care what is happening within each AS. It doesn’t know about the individual physical router hops inside each AS. It sees each AS as one single hop.

So, looking at the whole thing end to end… 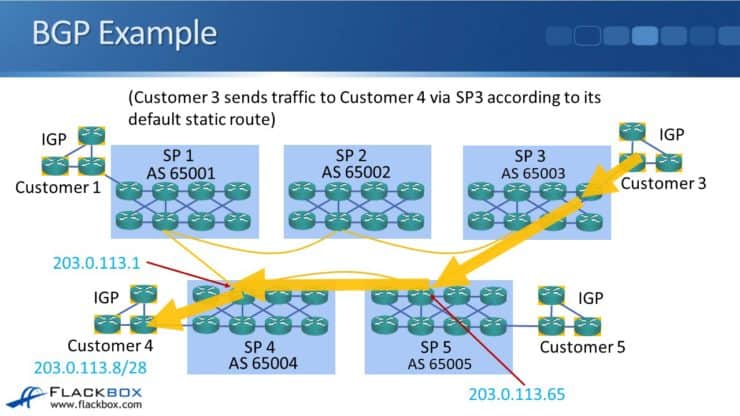 By default, BGP does not do load balancing. If multiple paths to a destination are available which have the same number of ASes, only one of them will be inserted into the routing table. BGP can load balance, but you have to override the default setting to make it do so.

We’ve seen that BGP uses the path with the least ASes by default. You can override this setting by configuring BGP policy.

One reason you might want to manipulate the BGP path choice is if you are a service provider (that is, you’re an AS, and you’ve got links to other ASes) and  your links to other ASes have different bandwidths. Going back to our example again, let’s say that the top half (which has a longer AS path) has higher bandwidth links than the bottom half. We are SP3, and we’ve got a higher bandwidth connection to SP2 than we do to SP5. By default, traffic is going to go through SP5 because it has a shorter AS path. If we know the top path has higher bandwidth, then we could influence the path selection via BGP policy to force traffic to go via the top path rather than the bottom path.

BGP policy allows you to manipulate the path for both outbound and inbound traffic.

In the next tutorial, we’ll look at the actual BGP configuration process and commands.