CCNA Certification Next Steps – What to Do After Passing the CCNA

In this Cisco CCNA post,  I will offer advice on the next steps after you’ve passed your Cisco CCNA Certification, in terms of what is the best certification to do next. You might find it useful if you’ve just passed your CCNA or if you’re planning on doing it in the near future and you’re not sure what to do next. Scroll down for the video and also text tutorial.

CCNA Certification Next Steps – What to Do After Passing the CCNA 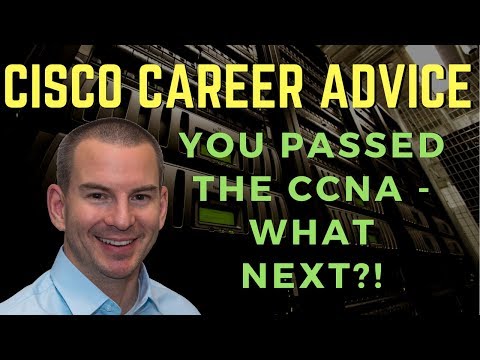 The first thing for me to say is congratulations on passing the CCNA! That’s given you a really solid foundation for the rest of your IT career. But things don’t stop here, right? We need to keep moving forward so you’re going to want to get more certification to give you even more benefits moving forward with your career.

The reason that we need to keep moving and keep doing more certification is for the same reasons that you did the CCNA in the first place. I know this is stating the obvious, but you want to have a good salary and job security. By that I don’t mean not worried about getting fired from your current position… but things happen, maybe you do leave for some kind of reason and it’s always good to be able to sleep secure at night knowing that if anything does happen you can just walk straight into another job because your resume looks that good.

Other reasons are you want to be a valued member of a team and also you want to be doing work that interests you and that you enjoy. So we’ll keep that in mind as we look at what certifications we’re going to do in future.

But the main considerations that you want to think about, really there’s three of these. First thing to do is research the job market and the way to do that is by looking at the job boards. For example, on Monster or wherever IT jobs are advertised in your particular area, look at what kind of jobs are being advertised. What jobs are in demand and what qualifications are required to get those jobs? Those are the qualifications that you want to have.

You want to keep a track of what’s in demand right now and also look at trends; see what appears to be becoming more popular and is going to be in more demand in future. That’s going to give you a really good idea on how to position yourself.

Because you want to be doing a good job there, right? Another thing is that this is going to make you more valuable to your employer. If you’re going to study for a certification that is very relevant to your current job, they’ll probably pay for it as well. So it’s a win-win doing something that is relevant to your current job – it gives benefit to your employer, and because it goes on your resume it’s also good for your future career.

So those are really the three main considerations I would say to bear in mind when considering your next certification.

So let’s actually look at the next certification options. Because you’ve just done the Cisco CCNA, it makes logical sense to carry on down the Cisco path. If you are going to do that, I would say that right now there’s three qualifications that are most relevant to do after the CCNA Routing and Switching.

First one is the CCNP, in routing and switching again.

I remember when I was first thinking about this and I thought, “Wow, there’s a lot of topics covered in the CCNA and that was just one exam, if there’s four exams for CCNP it must be a crazy amount of information!” But that’s not actually the case at all. Once you’ve got your CCNA I’d say you’re around 90% of the way to getting your CCNP. If you go on the Cisco website and you look at the topics on the CCNA and the CCNP, you will see that the topics are exactly the same. They’re both covering routing and switching. With the CCNP, it just goes in a little bit more detail.

So it really makes a lot of logical sense to do the CCNP Routing and Switching next because you’re already around 90% of the way there, you’ve got the information fresh in your head because you’ve just done the CCNA, and it’s really not a lot of extra effort comparatively to get the CCNP.

A big benefit that you get from doing this is a lot less people get the CCNP than get the CCNA. A lot of people that are working in different areas in IT – not just in networking, maybe in a side area like maybe they’re on server admin or maybe storage admin – they think it would be good for them to get the CCNA as well. And they’re right, it is good for them to diversify across the different areas, but those kind of engineers typically stop studying networking once they’ve got the CCNA because it’s not their main focus in their job.

If you do get the CCNP Routing and Switching, it positions you as more of a networking expert than everybody who’s got the CCNA. It makes you more attractive in the job market. Employers don’t know that it’s just a little bit more to get the CCNP. You appear to be much more skilled in networking by attaining it. It is three more exams, but it’s definitely a good choice to do the CCNP Routing and Switching next.

If you’re not going to do CCNP Routing and Switching next, I’d say the other two most relevant choices now are CCNA Security or CCNA Data Centre. The reason is that they are the two other CCNAs that are in the most demand in the job market right now.

You can see all the different tracks on the Cisco certification website, there’s a lot of different CCNAs available. My advice is do either Security or Data Centre. In fact, some of the tracks are in very little demand in the job market and they’re not going to really give your career a huge boost.

Now while I’m talking about that, please bear in mind as mentioned earlier that it also depends on your current job. If you’re currently working a lot on IP video and IP telephony, then CCNA Collaboration would be a great choice for you. Remember to bear those three considerations in mind that I spoke about earlier on.

Okay, so those are the most relevant Cisco certifications to do next, but there’s more than Cisco out there. There’s not just networking. And you can give your resume a really big boost by becoming what’s known as a “Full stack engineer.”

A Full stack engineer is somebody that’s got skills across the entire data centre, not just in networking. They have the skills in networking, but also in server operating systems like Windows and Linux, server virtualization such as VMware, and also in storage. If you are going to do this, typically you’re not going to get to a super-advanced level on all of those different domains. You can specialise as a network engineer, but it’s good to have some knowledge across the other domains as well.

Around 10 or15 years ago, if you were on the networking team, really you didn’t need to know anything about servers or storage because the job roles were all in their own separate compartments with very little overlap. But that’s not the case now. Now that virtualization is so prevalent everywhere there’s a lot of grey areas and overlap between the different job roles. It’s going to make you a lot more valuable to employers if you’ve got skills across all of them.

A big piece of advice I can give you, is keep going. If you stop and start and stop and start it’s always difficult to start again. So once you get one certification do another one, then another one, they’ll fall over like dominoes and when you do it like that it really doesn’t take long at all to become a full stack engineer. You can achieve it in a few years.

Again, it’s not a few days, it’s a few years, but this is great because the difficulty means that not many people do it. If you do become a full stack engineer with multiple different certifications, that’s what gives you that great job security where you know that whatever happens you’re always going to be in a great job with a great salary doing work that you love.

So to become a Full stack engineer you’re going to be doing other vendor certifications.

Other valuable certifications you can do are Microsoft MCSA and MCSE. And one that’s super popular right now is AWS, Amazon Web Services.

In no particular order those are the ones I would say would be the best to do in the current job market. Other vendor certifications are available, and again this comes back to what is relevant in your current job role. Maybe you’re working with Juniper routers and switches as well as Cisco, which would mean it would make sense to do a Juniper certification.

Another thing to think about is the current and future trends. A current trend which has actually been around for a while is Cloud. AWS is by far the biggest player here although Microsoft Azure is also popular. Because the technology is in high usage and the certifications are comparatively new there’s a lot of demand for them in the marketplace. You’ll find that when a technology really takes off there’s always going to be high demand because at that point in time there’s more jobs than there are people qualified to do them. So if you’re the person that’s qualified it makes you very attractive in the job market and you can get a great job.

Looking forward, I would say a future trend is SDN, Software Defined Networking. It’s already started but there hasn’t been huge uptake of it yet, but it will become more prevalent more in future. Programming skills such as Python are a huge benefit when working with SDN. There’s not really certification for it yet, but I expect that will change, either by being incorporated into another CCNA track or with its own certification. This is a good area to jump onboard with.

If you do want to become a full stack engineer, you can take my free introductory courses on Cloud Computing, and SAN and NAS storage course. They’re only 90 minutes long but will give you a really good foundational understanding of the technologies.

Introduction to SAN and NAS Storage

A Practical Introduction to Cloud Computing