How to Advertise BGP Routes on Cisco Routers

In this Cisco CCNA training tutorial, you’ll learn how to advertise routes in BGP (including the differences in the way the “network” statement is used and the “null route” trick).  Scroll down for the video and also text tutorial.

This is the 4th in a series of BGP tutorials. 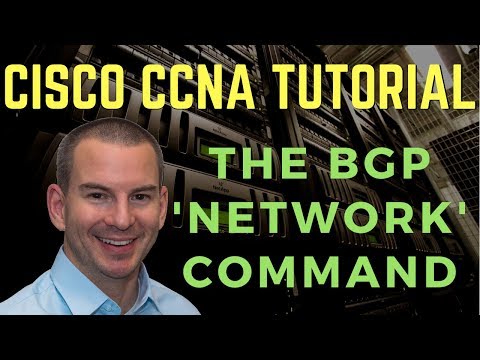 The Network Command Works Differently for BGP than It Does for IGPs.

RIP works a little differently from the other IGPs in that it does not form adjacencies with other RIP routers on the same subnet (it just sends out the advertisements), but other than that the operation is the same.

Let’s work through an example:

Under the OSPF routing process we enter the command:

The way the network command works is not intuitive but very important to understand.

In BPG the “network” command actually does have the more intuitive meaning of just ‘advertise this network.’ There is no ‘enabling BGP on an interface’. BGP uses targeted unicast TCP sessions to form peers based on your “neighbor” statements, it does not use multicast Hellos. So, the network command does not mean ‘turn on BGP on an interface.’ BGP doesn’t work at the interface level. A network statement simply means ‘advertise this network.’ 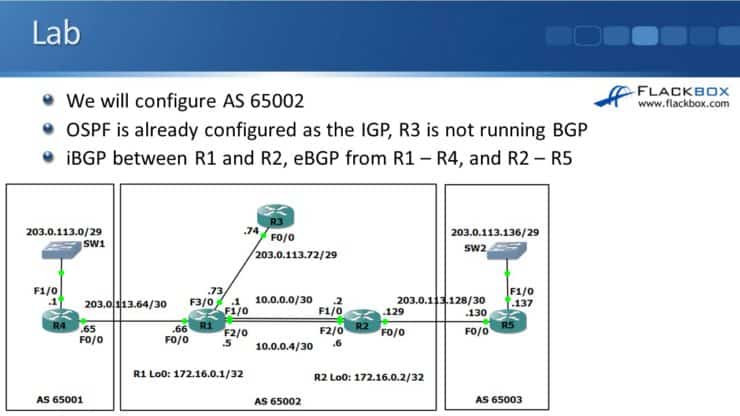 Right now, we have all our BGP neighbors configured, but we are not actually advertising any networks. If we enter “show ip bgp summary”, we’ll see that BGP is working and everything is up, but we’re not advertising any IP addresses anywhere. To get our router to advertise, we need to use the “network” command. 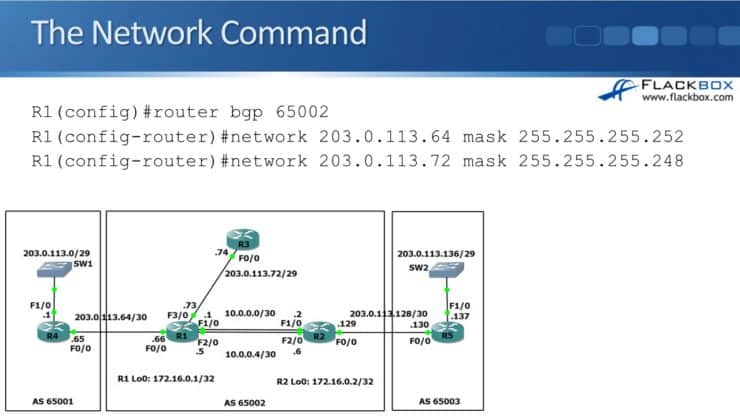 You Must Include the Word ‘Mask’ in BGP Network Statements

Notice the ‘mask’ keyword in the middle of the command. It is very easy to forget to include this. Static routes look quite similar – we add ‘IP route’, then the prefix, then the mask, then where we were going to send the traffic. For example: 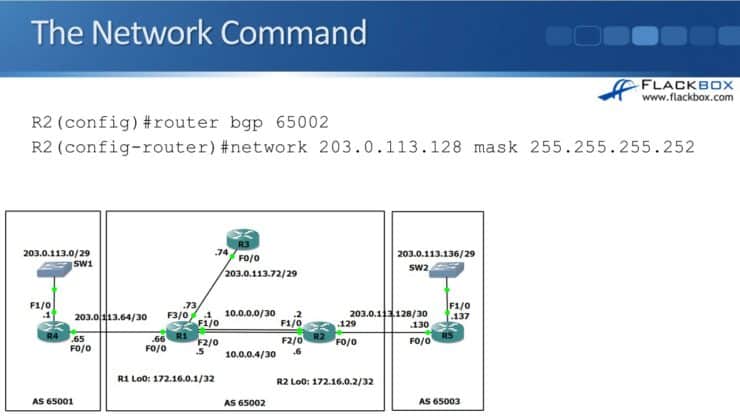 So we entered the network commands on R1. We also need to advertise the 203.0.113.128 network on R2. When we enter network statements, those networks will be advertised to all of the BGP peers. Then those BGP peers will advertise it to their peers as well. This is how we propagate the networks everywhere, so everywhere knows how to route to everywhere else.

The route in the network statement will only be advertised by BGP if there is an exact match in the routing table. For example, say you have a router with these IP addresses on its different interfaces:

The networks on the router interfaces are all in its routing table as individual routes with a /30 mask. There is no route to 203.0.113.0/24 in the routing table.

So in our example, we would have to add separate network statements for each of the router interfaces:

etc. for the rest of the interfaces.

If we did want to advertise those networks with a single command rather than configuring them individually, we can do a little trick to get 203.0.113.0/24 into the routing table. The way we do that is by configuring a static route going to null0.

A null route means ‘drop this traffic.’ One reason to use a null route is for security, but you can also use it for this trick for BGP.

Here’s the configuration we use for our example:

The first time people see this, they always think “wait I don’t want to do that, it’s going to drop all of my traffic going to those networks!” But it won’t actually drop the traffic. Let see why by looking at the routing table… 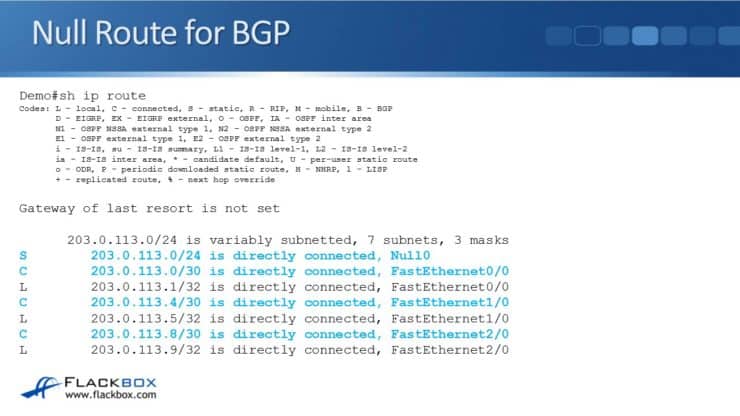 Using the null0 route gets the summary of the addresses that match your BGP network statement into the routing table. Once you’ve done this you can enter the network statement for 203.0.113.0/24 in BGP, and BGP will advertise that network. 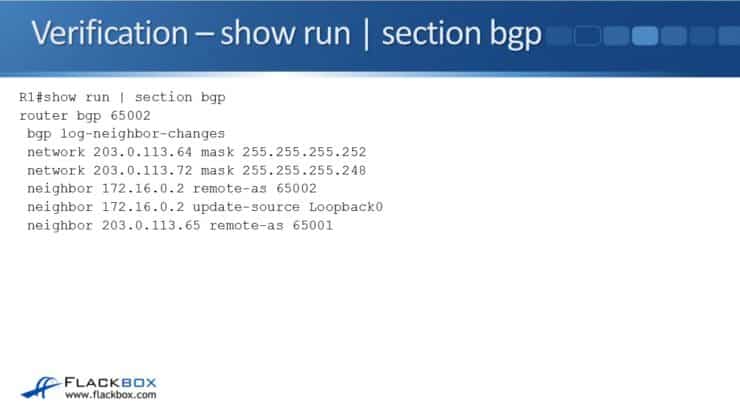 Once we have everything configured, to see all of our BGP commands in one place we can enter “show run | section bgp”. This is shown for R1 in the screenshot above.

“bgp log-neighbor-changes” is a default command. Whenever a BGP neighbor goes up or down it will be logged. 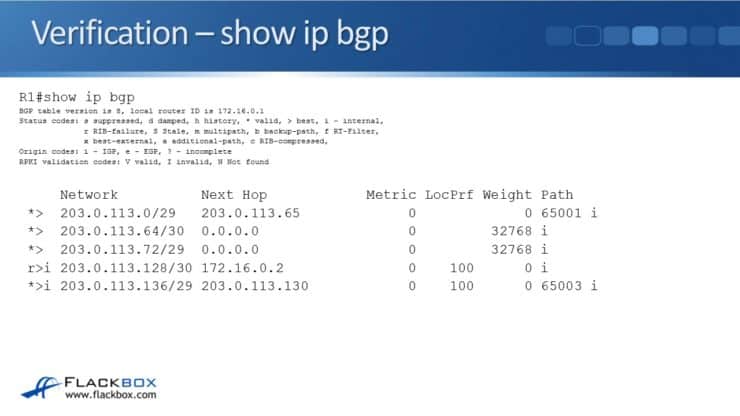 Once everything is configured, we want to make sure that we are sending out and receiving routes from BGP. The command for that is simply ‘show ip bgp‘ with no keywords at the end of the command. In this example, we can see we have 5 different routes that are in BGP. 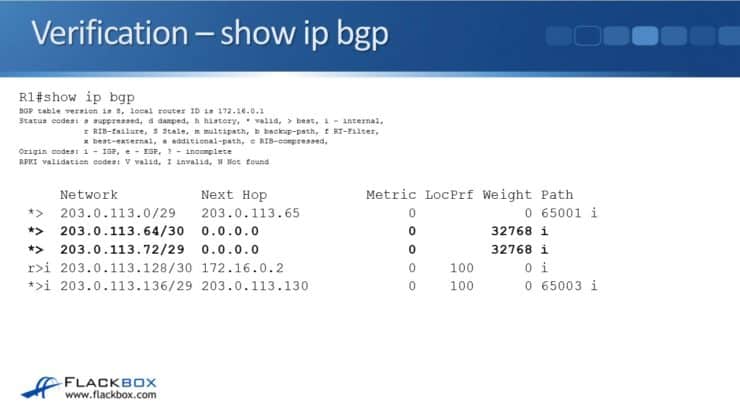 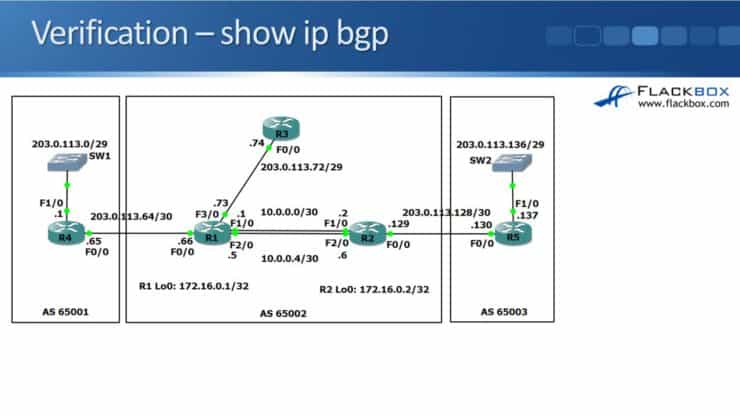 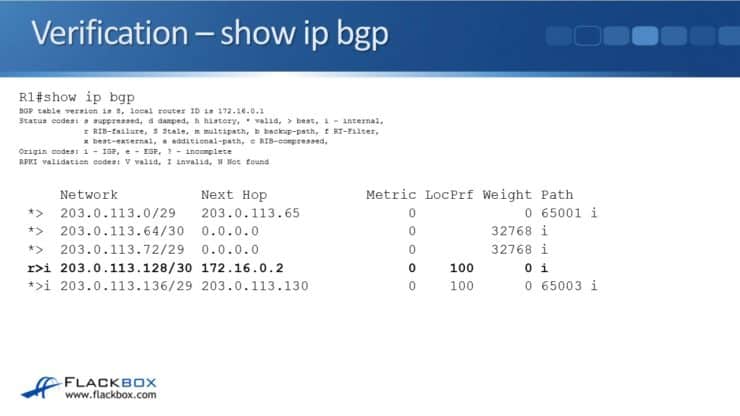 Next, we have the route to 203.0.113.128 with the next hop of 172.16.0.2. That is the link going from R2 to R5. On BGP in R2, we configured the network statement for that link. It’s also being advertised on R2 in the OSPF route as well, so R1 already knew about it. The OSPF route will go into the routing tables on other routers as OSPF has a better Administrative Distance than BGP. 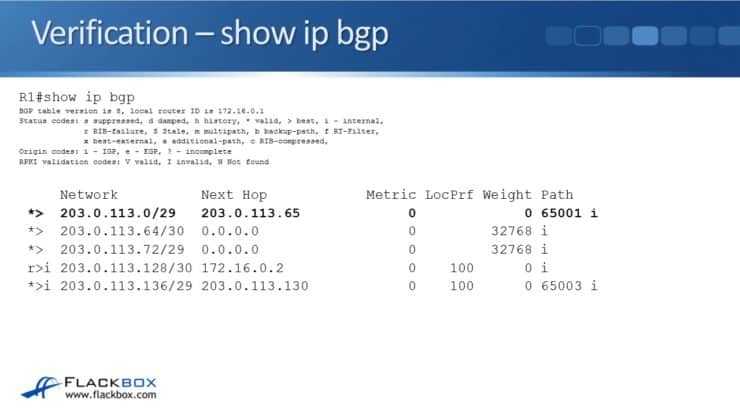 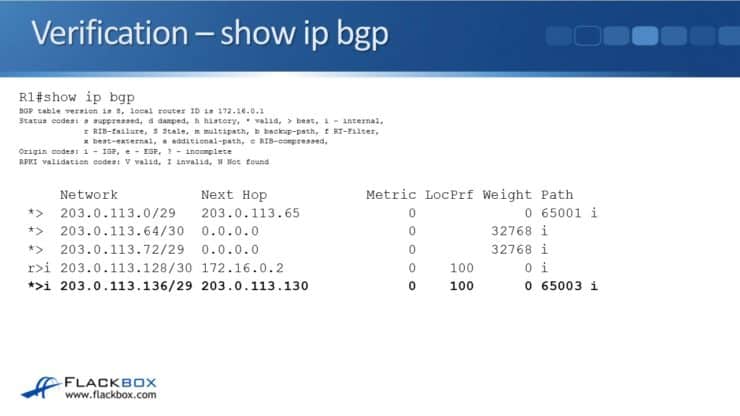 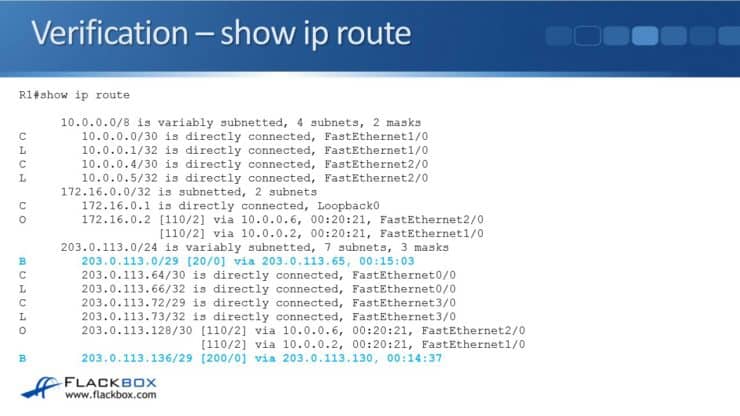 Troubleshooting When BGP Routes Are Not Advertised from Cisco

How to Advertise Networks in BGP