Why We Have The Spanning Tree Protocol

In this Cisco CCNA tutorial, you’ll learn why we have the Spanning Tree protocol. To understand why we need to have it, I need to first start off with a review of ethernet path selection. Scroll down for the video and also text tutorial.

Why We Have The Spanning Tree Protocol Video Tutorial 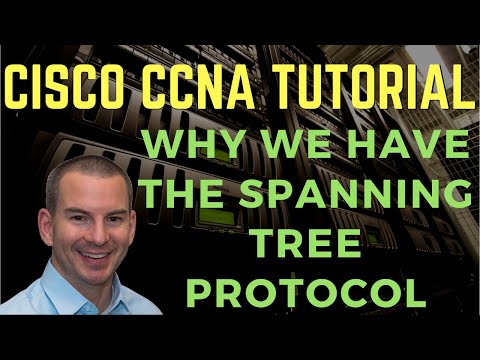 We’ve got our example network topology on the left-hand side here again. Our Layer 2 ethernet path selection is controlled by the switch’s MAC address tables.

Let’s see how those are built and how it works. In this example, PC1 wants to send traffic to the 10.10.10.2 IP address on R1. First, I’ll cover what would happen if we didn’t have Spanning Tree and then you’ll understand why we need to have it.

You can see that the MAC address tables are getting built on the switches here as traffic hits them. Any subsequent traffic for 1.1.1 that hits either CD1 or CD2 will be forwarded out those relevant ports. Switch CD1 floods the broadcast traffic at all parts apart from the one that it was received on there. The traffic will then reach R1, CD2, and Acc4.

R1 will respond to the ARP request. CD1 learns that MAC address 2.2.2 on R1 is available via interface GigabitEthernet 0/1 from the ARP reply. Any subsequent traffic for 2.2.2 will be forwarded out of that port. Switch CD1 now knows the best ports to send traffic out for both R1 and PC1.

Switch CD1 already knows to forward the ARP request for 1.1.1 out towards PC1 on interface FastEthernet 0/24.

We now have an end to end path selection in both directions between PC1 and R1 going through the switches Acc3 and CD1. The switches knew which port to send the traffic out of. But, there’s a problem here.

Switch Acc3 received the ARP request from PC1 and it floods the broadcast traffic out all ports apart from the one it was received on. This is if we don’t have Spanning Tree. That includes port FastEthernet 0/24 facing CD1 and the port facing CD2, as well.

Switch CD1 receives the ARP request from access three and it floods the broadcast traffic out all ports apart from the one that was received on. That includes going out it’s an interface GigabitEthernet 0/2 towards CD2 and CD2 does the same thing.

It floods the broadcast traffic out all ports apart from the one it was received on and that includes port FastEthernet 0/21 which is facing back towards switch Acc3, again.

But, it doesn’t end there. The broadcast traffic was also forwarded out interface FastEthernet 0/21 by Acc3 when the ARP request came in. So, we also have a loop running counterclockwise between Acc3, CD2, and CD1.

You can see the ARP request comes in, Acc3 sends it to CD2, CD2 sends it to CD1, CD1 to Acc3, Acc3 back to CD2, and so on. We have loops running in both directions, both clockwise and counterclockwise between Acc3, CD1, and CD2. Still, it doesn’t stop there because the broadcast traffic was also forwarded out interface FastEthernet 0/21 by switch CD1.

The Layer 2 ethernet header does not have a TTL time to live field to stop the looping traffic like our Layer 3 IP header does. So, on a Layer 2 network, if you get traffic looping, it will loop forever.

There’s nothing to stop that from happening. But, if you do get a loop happening, the way you can stop it is by physically going and unplugging a cable.

It’s used to prevent any Layer 2 loops. It does that by detecting any potential loops and blocking ports to prevent them.

This means that it is being blocked to prevent the loops, both clockwise and counterclockwise that we’re running between CD1, CD2, and Acc3.

We also had that other loop between Acc4, CD1, and CD2 as well. On that side, port FastEthernet 0/24 on the Acc4 switch has been blocked. The spanning tree will detect potential loops and or block a port to break the loop.

Let’s say that those are 1 Gb interfaces. We would have hired 2 Gb worth of uplink bandwidth. But, because one of those ports is being shut down, we’re only using half of our available physically connected uplink bandwidth.

We’ve only got 1 Gb worth of uplink connectivity rather than 2 Gb. Spanning tree actually shuts down physically cabled interfaces. It reduces the amount of bandwidth that you have available. It’s a necessary evil because if we’ve got a broadcast storm, the network wouldn’t work at all, that would obviously be a far worst scenario.

Spanning Tree automates failover as well as performs loop prevention. In the example below, on both Acc3 and Acc4, the available uplink is the one facing towards CD1.

In the core distribution layer two switch, CD2, both the uplinks from our access to our switches to it are blocking to prevent the loops. But, if the switch CD1 goes down or the links to CD1 go down, Spanning Tree will detect that and it will fail the uplinks over to using CD2 instead.

We already covered one of the bad things about Spanning Tree. It limits the amount of bandwidth you have by shutting down interfaces that are actually physically cabled. Another bad thing about Spanning Tree is, it typically has a slow convergence time. It can actually take up to 50 seconds to converge.

Spanning Tree got some bad things about it, but, it’s absolutely necessary in networks. It’s far more important to ensure that we don’t have any Layer 2 loops. However, we would like to minimise the use of Spanning Tree, if we can.

Why Spanning Tree Is Important: A Demo: https://www.networkcomputing.com/data-centers/why-spanning-tree-important-demo