In this Cisco CCNA tutorial, you’ll learn about Cisco’s multi-chassis EtherChannel options of StackWise, vPC, and VSS. Scroll down for the video and also text tutorial. 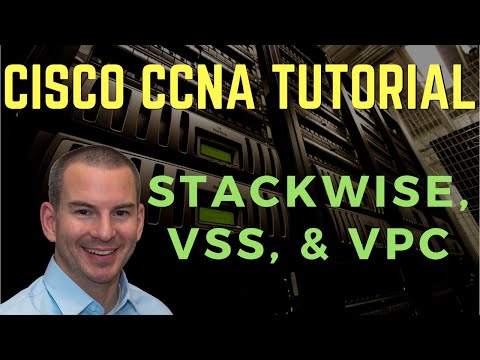 Matching EtherChannel settings have to be configured on the switches on both sides of the link. You can configure separate port channels from a switch to redundant, upstream switches like you see in the diagram below.

I’ve got four physical interfaces configured as uplinks here, but only two of them are forwarding. I’m only getting half of my possible bandwidth, hence, that brings us back to the same problem of only using half of our available physical bandwidth again.

When I do a ‘show spanning-tree vlan 10’, which is the VLAN that my PC’s are in, I can see that out of those two port channels, one of them is forwarding traffic. This is the port channel connected to the root bridge. The other one is blocking because it’s forming a potential loop. So, it’s still not perfect.

There is a way that we can get this configured so that we are actually forwarding on all of our physically connected uplinks. The way that we do that is with Multi-chassis EtherChannel, which some switches will support.

When we configure it, the switches support a shared EtherChannel from different switches, just like in the diagram below. Normally we would have two separate port channels. One going up to CD1 and another one going up to CD2. When those core distribution layer switches support Multi-chassis EtherChannel though, I can do a single port channel, which goes to both of them.

CD1 and CD2 need to be advanced level switches and they must support talking to each other and having a shared port channel going downstream. This is supported on some models of Cisco switches.

Since it sees a single link, so there will be no loop there. Therefore, Spanning Tree does not block any of the ports. We have all of them forwarding. We get the full use of all of our physical bandwidth and it supports full load balancing and redundancy across all the interfaces. If any of the interfaces goes down, it will failover to another available interface.

The available Cisco technologies that support this are StackWise, VSS, and vPC. Now, a single switch is not going to support all three of these. Different platforms of switches support different options, and if a switch does support one, it will only be one.

So which option is supported on which family of switches? Well, StackWise is on Catalyst switch platforms, including the Catalyst 3750, 3850, and 9000. Notice I’m just saying “including” here because Cisco comes out with new models of switches very regularly, and when we do come out with a new model of switch, it’s likely to support one of these three options. Thus, this will be updated over time.

That is similar to the next option, which is VSS, the Virtual Switching System. It is supported on the Catalyst 4500 and 6500 switch families.

The last option is one of its own, a little bit different, is vPC or virtual Port Channel. That’s supported on the Nexus switches and rather than stacking the switches together and them being managed as if they’re a single switch.

When you use this on the Nexus, they’re still configured as two separate switches, but you do a matching configuration on them, and that allows for a shared part channel from those switches.

At the CCNA exam level, Cisco expects you to know a broad overview of them, but they don’t expect you to know how to configure these. If you go on to the CCNP level or one of the other CCNA tracks, like data center, you’ll learn then how to configure and monitor these technologies.