In this Cisco CCNA tutorial, you’ll learn about Layer 3 EtherChannel. Scroll down for the video and also text tutorial. 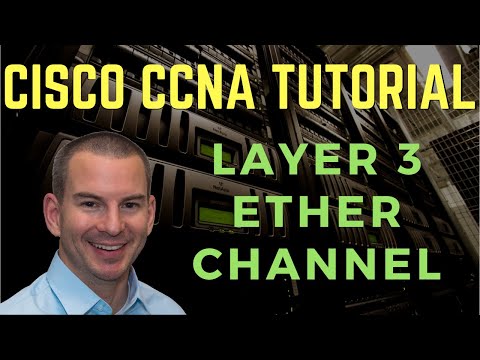 This course “filled in the blanks” left by textbooks and other videos. Neil communicates concepts and real-world scenarios extremely well. I have found it to be a good match for my pacing and a valuable tool either on its own or in tandem with other study materials.

That's a standard command you can use on a Layer 3 switch, whether you're using EtherChannel or not. You can put an IP address on a Layer 3 port.

Now, let's look at the configuration. At global config, I've entered the commands:

This will make to make the range of interfaces as Layer 3 ports, and then I'm going to configure them as a port channel using the command:

We'll group the ports together into an EtherChannel, then, we can put our other configuration on that EtherChannel. That's where we're going to put our IP address. We say:

The 1 ties up with the channel group number. In this example, we’ll configure the IP address as:

There’s something else I want to talk to you about here and that is the network design. Looking at our traditional campus design with the Core, Distribution, and Access layer, Layer 2 links between the Access Layer switches and the Distribution Layer switches.

A trend that you can see increasingly now is actually putting Layer 3 links everywhere. The benefit you get from doing that is it means that you're not using spanning tree anymore. Spanning tree is a necessary evil.

The bad side of spanning tree is that it tends to shut down half of your links, and it's very slow to recover from failure as well. So it's bad, but it still does good things. You still need it, because it would be way worse if you had a Layer 2 loop in your network. That would just basically bring your network down.

We make sure that we don't have Layer 2 loops by having spanning tree enabled, but the bad side is that it's slow to recover from failures and it does shut down half our links. It would be better if we could have Layer 3 links everywhere, and not use spanning tree any more, right?

With your routing protocols, they support equal-cost load balancing. Therefore, you're not going to have links being shut down. All your links will still be available, and traffic will be load-balanced across all of them. Also, your routing protocols recover from failures. They converge a lot faster than spanning tree does. That's the benefit you get there.

The default gateway for your hosts has to be in the same IP subnet. So, your default gateway is now going to be configured on your Access Layer switches, and you're going to have routing everywhere.