In this Cisco CCNA training tutorial, you’ll learn about manipulating the Spanning Tree Root Bridge Election. Scroll down for the video and also text tutorial. 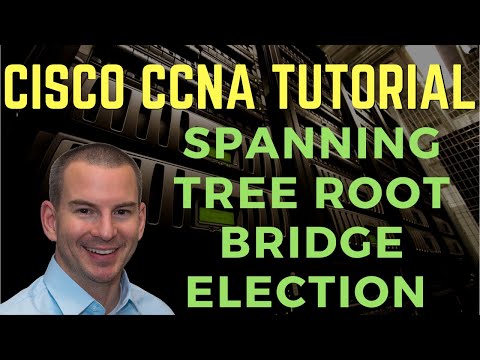 Since Spanning Tree selects paths pointing towards and away from the Root Bridge for forwarding traffic along, the Root Bridge acts as a center point of the LAN. Best practice is to ensure that a pair of high-end core switches are selected as the first and second most preferred Root Bridge.

You can manipulate the Root Bridge Election by setting Bridge priority on your switches. The default value is 32768, and the lowest number is preferred. In the case of a tie, the switch with the lowest MAC address will be selected.

If you do not manually set the Bridge priority on your switches, they’re all going to default to 32768. The switch with the lowest MAC address will be the Root Bridge and that is liable to be the oldest switch in your network.

If you think about it, whenever Cisco makes a new switch, we’re going to increment the MAC address. So, the lowest MAC address is probably going to be the oldest switch. That is likely to give you suboptimal Root Bridge selection.

In on our example below, all switches have been left with the default Bridge Priority. You’d be surprised at how often this does actually happen in production networks.

That is because Spanning Tree works just fine straight out of the box and on a lot of networks, therefore, administrators don’t touch it at all. They just leave it as is and that can lead to the problem as you see in our example.

In the example, the switch with the lowest MAC address becomes the Root Bridge and that happens to be the old switch that we’ve got in the warehouse down in the bottom right.

That old warehouse switch has got little bandwidth links. It has fast Ethernet links compared to Gigabit Ethernet and it’s old so it’s got limited GPU and memory resources.

If we check this, I go on to the warehouse switch and enter the command:

I can see here that this bridge is the root and the priority is the default of 32768.

Now, we’ll look at the actual paths that traffic will take throughout our network. I’ve removed links that have got blocking ports on them in the diagram. It only shows the Spanning Tree where the traffic is going to be forwarded over.

Let’s see what would happen if we had a PC that was connected into the Access1 switch on the left and it sent traffic to the Access3 switch over near the right-hand side.

The PC connected to Access1 sends some traffic in with a destination address of the other PC. Access1 will extend it to Distribution2. It will then go at Core1, then to Distribution3, then Access4, then the Warehouse, and then Access3.

It’s pinging around all over the network and going via the warehouse switch, and it’s seven hops in total. That’s the suboptimal Root Bridge selection. All traffic between different pairs of distribution switches will go over an indirect path and transit that old switch in the warehouse.

That’s likely to congest some links overwhelmed with CPU and RAM, and of course, lead to suboptimal performance.

What we should have done was configure the Root Bridge to be sitting on one of our core switches so that all traffic is going to go through that path instead.

The way that you set this is that, at global config on the switch that you want to be the Root Bridge, enter the command:

To verify it, I go to Core1, enter the commands:

If we now look at the Spanning Tree in the diagram here, again, we’ve set the core bridge as the Root Bridge. I’ve taken out all of the links that have got blocking parts on there.

Now, you see it’s only five hops as compared to the seven hops that we had before. It’s going along the most direct path which is going through the core. So, that is much more optimal Root Bridge placement.

Using the same example, if the Core1 switch fails, we want to ensure that traffic still goes through the most direct centralised path.

To do that, we need to configure Core2 to be the next most preferred Root Bridge. If we didn’t do that and Core1 went down, when we had that outage we would be back to the warehouse being the Root Bridge again and we want to avoid that. We always want traffic to be going through the core.

To do that, we go on the command line on Core2, and we enter the command:

In Core2, we verify it with the same command:

Here, I can see the Root Bridge is still on Core1, and that this has got the next best priority so this will be the second most preferred switch.

We need to configure the Spanning Tree so it aligns with the HSRP configuration. R1 is the HSRP active gateway. R1 is directly connected to the core/distribution switch CD1 (but not CD2) so we should make this the Spanning Tree Root Bridge.

2. If CD1 fails we need to ensure that the Spanning Tree Root Bridge will failover to CD2 rather than an access layer switch.

3. Verify CD1 has the best Bridge Priority and becomes the Root Bridge.

4. Check the other switches to verify CD2 has the next best Bridge Priority.

5. Verify the end to end traffic path between the PCs and the Internet by using the ‘show spanning-tree vlan 10’ and ‘show mac address-table’ commands as shown in the last lab exercise.