In this Cisco CCNA training tutorial, we’re going to carry on with our subnetting theme, and by the end of the tutorial, you will be able to carry out a Variable Length Subnet Mask design for a real-world network topology. Scroll down for the video and text tutorial. 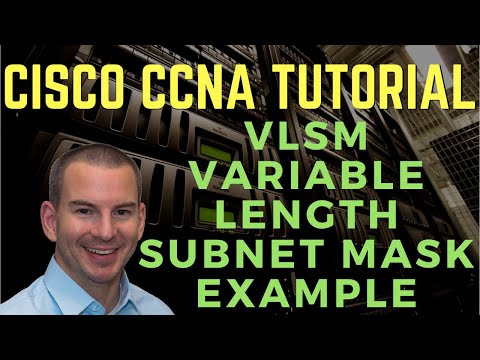 It’s only a small network in the example of it we’re going to work through, but you can apply the same things that you’re going to learn here to larger networks in the real world.

Back in the day with early routing protocols, whenever you did subnetting, each of the subnets had to be exactly the same size. If you had one subnet that was a /28 for example, they all had to be a /28. You couldn’t mix and match /27, /28, /29 within the same larger network.

That ended up wasting a lot of addresses. So with later routing protocols, they did have support for Variable Length Subnet Masks, and now we can mix and match the size of our subnets within that greater network.

The things that we need to consider when we’re going to do the design are:

In that case, you would put it in its own subnet because we have to route between different subnets. It’s easy to secure them at the Layer 3 level based on their IP address.

For example, this is our network topology diagram shown below. We’ve got an organization and they’ve got an office in New York and a branch office in Boston.

These are the different parts of the network that we need to apply IP addresses to, and we’ve been allocated the Class C network of 200.15.10.0/24 from our Internet Service Provider.

Another thing that we need to do is don’t forget about our point-to-point links between the routers. They need to have connectivity between each other and each is going to need IP addresses. The outside interface in the New York router is connected to the outside interface on the Boston router.

You would create that subnet at the start of our available address space and then just keep working your way down. So, you start with the largest subnet. Then move to the next one until you’ve allocated addresses for all of your different subnets.

Let’s say that I’ve got a subnet that has got 14 hosts on there. Well, you know that one of our subnet sizes is exactly for 14 hosts. Don’t give a subnet that exact size because maybe in a few weeks, a couple of extra people are going to join the department, and now how are you going to fix that problem?

We have a spare subnet with 30 hosts in it, so don’t just do two subnets of 30. Do three or four subnets or 30 because if you do have a new department that acquires up to 30 hosts later, you’ve got a spare subnet and everything is still sequential, contiguous, and logical, going from largest down to smallest.

Doing design for what is right right now, designed for what is going to be the best fit in the future. Leave some scalability there, for a room for growth. That’s what you do in the real world.

However, don’t do that in the CCNA exam. Do not think about, “Oh, this is what I would do in the real world. This would be the best practice.” Do exactly what the exam question tells you to do even if you think that would be a stupid thing to do.

Don’t overthink things. Don’t think, “Oh, well it would be better to do it this way.” Do exactly black and white. Do what the question asks you to do, and then you’re going to get the question right.

For our example, we had the Engineering departments in New York and Boston and they have got 28 hosts each, and that was the largest subnets we required.

Let’s say the exam question says that the departments will not grow and we need to use the smallest subnets possible to maximize our available address space. So do not leave any room for future growth here because the question says “Make it optimal. Maximize your use of the address space.”

So, back to the question. We will calculate the optimal subnet mask for the Engineering departments. So no bigger than is necessary, but make sure it’s at least big enough to support 28 hosts. Once you’ve done that, you’ll be able to determine the network and broadcast addresses.

Do that for both Engineering departments, for both New York and Boston, and figure out what the range of host addresses will be.

We have been allocated 200.15.10.0/24, a class C network. We’ve got two different departments that we want two different subnets for and they had got 28 hosts each.

The last subnet is the link between the New York and Boston routers. We want to support 2 hosts. Remember a /31 and a /30 supports two hosts.

Hopefully, you remember I told you before. Unless the exam explicitly tells you, if you need to support 2 hosts, go with a /30 because that’s the standard that we use. It complies with all of the Internet standards.

When we did our design, we started off with the largest subnets which were the Engineering departments:

Then I got the Sales department:

The subnet I used for the point-to-point link:

Next, we’re going to use the first available address as the IP address in our router interfaces:

This would be an acceptable network diagram in a real-world environment.