Subnetting Class A and Class B Networks Tutorial

Subnetting Class A and Class B Networks Video Tutorial 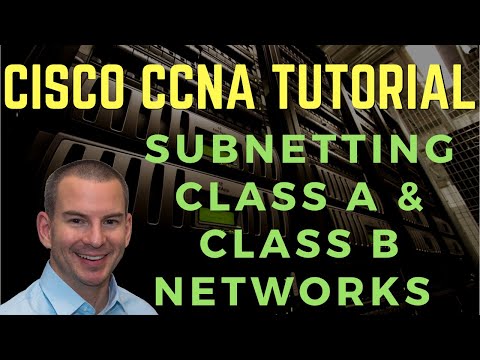 We’ve got the IP address and the subnet mask. We’re putting a line after the /29 and the line is going in after the 8. In the top right, we’ve got ones under 128 and 8. We add those two together which is equal to 136.

Another popular way of calculating the network address, the broadcast address, and the host addresses is by using the magic number method.

You’ll see this being cited in quite a few places on the internet. This one is very handy if you’ve been given the subnet mask in dotted decimal notation rather than with a slash.

We have 20 bits for the network addresses which is the difference between the default /8 and the /28 that we’re using. 2 to the power of 20 works out a little over one million subnets.

The Magic Number Method – Example 2B

Another way you can do it is by using the magic number. In this is way, you can do it quite quickly in your head. Especially if you were given a subnet mask in dotted decimal notation rather than in slash notation.

This time we’re going to do a Class A on the third octet. In our example, we’ve been allocated a Class A 60.0.0.0/8. If we subnet it into/19 networks, how many subnets do we have, and how many hosts per subnet?

In a /19, the line is going to be after 3 bits on the third octet. So that leaves us 13 bits for hosts. 8 in the last octet and then 5 on the right-hand side of the third octet.

To figure out how many hosts each network is going to support, it’s 2 to the power of 13 minus 2 so that’s 8,190 hosts per network.

As usual, we’ve got the second part of the question. So for the IP address, 60.15.10.75/19, what’s the network address to the broadcast address and the range of valid IP addresses?

The Magic Number Method – Example 3B

You’ve been asked to subnet the 134.65.0.0 network into 6 different networks, what subnet mask are you going to use?

Some extra information that we weren’t actually asked for it in the question are:

When you are on the exam, there are lots of different ways that they can ask you questions about subnetting. But it’s all going to boil down to just a few things.

It could be a variation of given a network requirement of ‘X’ amount of subnets and ‘Y’ amount of hosts per subnet, what network address and subnet masks should you be using for each subnet?

The other basic question they can ask is if they give you a particular IP address and subnet mask, calculate that subnet’s network address, the broadcast address, and the range of valid host IP addresses.

So again, it could be any variation in those questions. They may ask it differently, but as long as you can answer those questions, which you can now because we’ve done loads of practice examples of them. Then, you’re going to be fine for anything that they throw at you on the exam.