In this NetApp training tutorial, I’ll give you an overview of NetApp’s E and EF-Series platforms that run on the SANtricity operating system. Scroll down for the video and text tutorials. 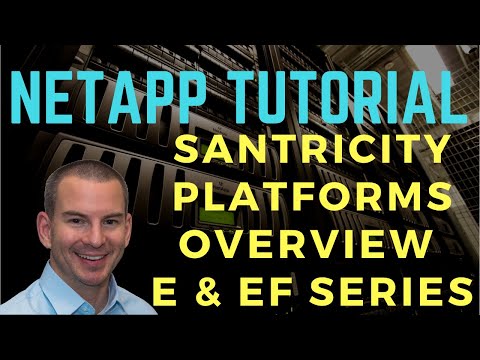 The EF-Series are all flash arrays, so that’s kind of like AFF with ONTAP. The E-Series, on the other hand, are hybrid, meaning they support SSDs, just like EF-Series, and they support spinning discs as well. It is like FAS systems on ONTAP.

E-Series and EF-Series run on the SANtricity operating system. The systems are dual active controllers, hence, you don’t get big clusters with lots of nodes like with ONTAP. All of the systems are two controllers and both are active at the same time, therefore, they’re both servicing clients.

The client access for our block level access is either direct-attached storage (DAS) over SAS cables or it is remote SAN. It supports Fibre Channel, iSCSI, InfiniBand, and NVMeOF.

The platform offers raw storage to clients and also has additional features such as snapshots and replication. It’s not just a bunch of discs providing raw block storage. It’s more of an app because it does have some features as well.

The feature set is, however, basic. The SANtricity systems are built for low overhead and a lot of speed. ONTAP systems support varied workloads, and lots of different features, thus, known as the Swiss army knife.

SANtricity systems are referred to as the dragster of the NetApp storage portfolio, meaning, they’re very fast, but you don’t get all the features as you do with ONTAP.

SANtricity systems don’t have their own file system. It is managed at a higher level by the client operating system or application. Furthermore, SANtricity was evolved from the acquisition by NetApp of Engenio in 2011.

E and the EF-Series are suitable if you want a simple, fast, and reliable storage for a single workload. It does support the direct attach storage with SAN protocols for this matter.

In the EF-Series page, we would see the E5700 and the E2800. With all the NetApp platforms, it’s always the bigger the number, the bigger the system. Meaning there are more capacity and performance.

Even if they have similar hardware, the EF-Series allows SSDs only and they’ve been performance tuned for that all flash SSD only disc. You’re going to see exactly the same specs on EF280 as well.

Just like our FAS and our AFF systems, we can get the extra capacity by adding disk shelves to those controllers.

Intro to the E-Series family of storage systems: https://docs.netapp.com/us-en/e-series-family/intro-family.html