In this NetApp tutorial, you’ll learn about VMware VVols, that’s Virtual Volumes, with ONTAP storage. Scroll down for the video and also text tutorials. 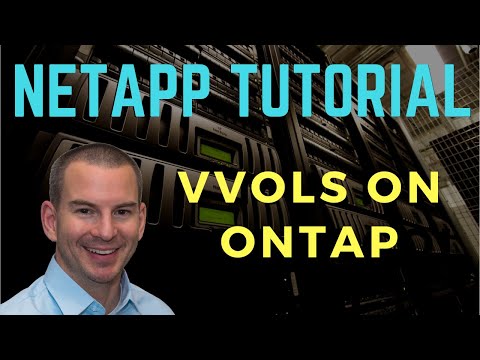 When we’re talking about traditional datastores, it’s one volume or one LUN always that makes up that datastore. ESXI clients use NFS or a SAN protocol, Fibre Channel, FCoE, or iSCSI to access the datastore.

With a traditional SAN datastore, vSphere formats a LUN with the VMFS file system and its vSphere that manages the data in the LUN. vSphere manages the file system, so ONTAP has no visibility of the individual virtual machines under files inside that LUN.

QoS policies cannot be applied to individual VMDK files because ONTAP has no awareness of the files inside the VMFS file system. So your QoS policies can be more granular if you’re using NFS with vSphere, than if you’re using a SAN protocol, and that is where the big benefit and the idea behind VVols come in.

So you get that if you’re using NFS, but you don’t get it normally with traditional datastores if you’re using a SAN protocol. It also enables policy-based management and compliance monitoring.

With VVol datastores, you get that policy-based management at the more granular level down to the virtual disks that make up the virtual machines. It minimizes manual handoffs between VM and storage admins, so it makes administration easier. Currently, it’s VVols version 2.0, which is supported by ONTAP.

So when version 6 came out, a lot of VMware customers stuck with vSphere version 5.5, which did not support VVols. Because it didn’t support it, obviously, they could not deploy VVols. So that’s one of the big reasons that VVols is not really in a huge amount of use today.

Having said that, vSphere version 5.5 has now gone end of life. So customers are now moving over to supported versions of vSphere. Also, if you have a look at the technical reports and other documentation that is coming out from NetApp right now, NetApp are pushing VVols quite strongly because you do get the enhanced policy-based management, you do get the extra granularity.

Another thing is that there’s enhanced offload over and above what you get with VAAI for traditional datastores as well. So VVols do have good benefits. Yes, there’s not a huge uptake of them as I’m recording this right now, but that might change going forward. I wouldn’t be surprised if you see VVols becoming a lot more popular.

vSphere and the storage system establish a two-way-out-or-band communication to manage VVols. The VASA provider translates between NetApp and vSphere APIs. So the VASA provider has to be enabled for VVols to be available with your ONTAP storage.

When you install VSC, the Virtual Storage Console, VVols provider is enabled in the latest release of that by default anyway. A VVol datastore is a logical storage container construct made up of one or multiple volumes in an SVM on the storage system, so that’s a difference between VVol datastores and traditional datastores.

Those volumes are, however, always part of the same SVM in the ONTAP storage. So it can span multiple volumes. Those volumes can also be spanned across multiple nodes in the cluster as well, but they do all have to be in the same SVM for the same VVol datastore.

VSC Storage Capability Profiles define the characteristics of each volume. So when you create your VVol datastore, you’re going to specify how many volumes make up the datastore.

Your VVol datastores are created in the VSC, Virtual Storage Console, and when you create a VVol datastore, you specify the SVM and access protocol. You also specify how many ONTAP volumes will make up that VVol datastore and the Storage Capability Profile for each one of those volumes and volumes can be added or removed later.

If you wanted to, you could have multiple VVol datastores in the same cluster. That is supported.

When you provision a traditional datastore with VSC, you can assign a minimum and maximum traditional QoS IOPS value. Minimum is only supported on AFF, maximum is supported on your FAS systems and AFF as well. 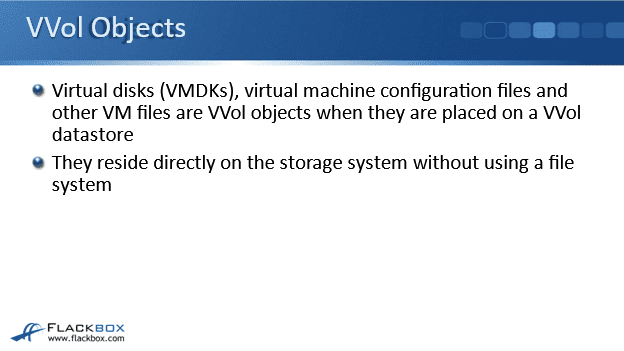 It is a metadata container for the .vmx file, NVRAM, logs, and VMDK descriptors. So the Config file contains configuration information about that particular virtual machine.

I put a line there on the slide because when you create a virtual machine and you deploy it on a VVol datastore, you’re always going to have the Config and the Data VVol. The VVols below the line are optional or depending on the actual state of the virtual machine.

The next VVol type is Memory, and that is created for a virtual machine snapshot. So if you don’t have a snapshot, that won’t exist. If you do create a snapshot, then that is going to create the Memory VVol. In SAN, again, the same as the Swap and the Data VVols.

The vSphere VM storage policies are then used when deploying the virtual machines to say what storage characteristics we wanted those virtual machines to get. The VM storage policies were mapped to the Storage Capability Profiles with a one-to-one relationship. So that works exactly the same in VVol datastores, as it does for traditional datastores.

So for example, maybe you deploy a virtual machine that is being used as a database server, and that database server has got two different virtual disks, two different VMDK files. You could give one of the VMDK files, which is a VVol object, a high-performance QoS policy. You could give the other one, a lower performance QoS policy.

You’ve got a lot of granularity with your VVols datastore where different virtual disks and virtual machines can be assigned different QoS policies and also other characteristics as well, such as whether they’re thin or thick provisioned within the same datastore. Not possible to do that with traditional datastores.

When you create a VVol datastore, you specify the default Storage Capability Profile. This is when you’ve got multiple volumes making up that VVol datastore. Because different volumes can have different Storage Capability Profiles, you’re going to specify a default one. The default SCP is used when you create a virtual machine if you do not specify another SCP.

Next, let’s look at what happens when you provision a virtual machine. So when you create a virtual machine its Config and Data VVols are created at that time. They are both created in volumes in the VVol datastore, which you select, which are compatible with the Storage Capability Profile, which you also select.

If the virtual machine has multiple VMDK files, a separate Data VVol will be created for each one and different Data VVols can be assigned different Storage Capability Profiles.

It’s the VMDK file, the virtual disk, which is really being used by the virtual machine. That’s when you’ve got all the I/O going to. The Config VVol is just got metadata in there, so performance is not really a consideration for it.

It’s created in a volume in the VVol datastore, which is compatible with the VVol datastore’s default Storage Capability Profile. Again, no QoS policy is applied because performance is not a big consideration here.

If they were each accessing their LUNs individually, because each of those VVol objects when you’re using SAN uses a separate LUN, so if for each virtual machine, it’s maybe going to have four different VVol objects that are going to be four different LUNs. You can see that you would very quickly reach the maximum 256 LUN limitation.

It’s not like with traditional datastores where it’s a single LUN and all the ESXi hosts are connecting in on that single LUN. With the VVol datastores, each separate VVol object is going to have its own LUN when you’re using SAN. So a lot of virtual machines would be a lot of LUNs, you would quickly reach the scalability limitation.

So to prevent you from running into that scalability limitation, the ESXi hosts are not connecting in directly to the individual LUNs. There is a Protocol Endpoint in front of there, which is used as an I/O proxy. A single Protocol Endpoint is going to be servicing multiple LUNs behind it.

When we provision the VVol datastore using a SAN protocol, the 4 MB Protocol Endpoint LUNs are going to show up on the LUNs page in System Manager. The VASA provider controls the data paths and the multipathing.

The next thing is the Enhanced Offload Operations. You’ve seen that the big benefit of VVols is the additional granularity that you get. Especially with your SAN protocols, it allows you to set characteristics of the storage for your virtual machines at the virtual machine, and even down to the virtual disk level.

Different virtual disks for your virtual machines, even in the same VVol datastore, can have different performance characteristics set on them. So you get that additional granularity.

Also, offloaded NFS storage vMotion while your virtual machines are powered on. That is supported in traditional NFS datastores while VMs are powered off, but not when they’re on. 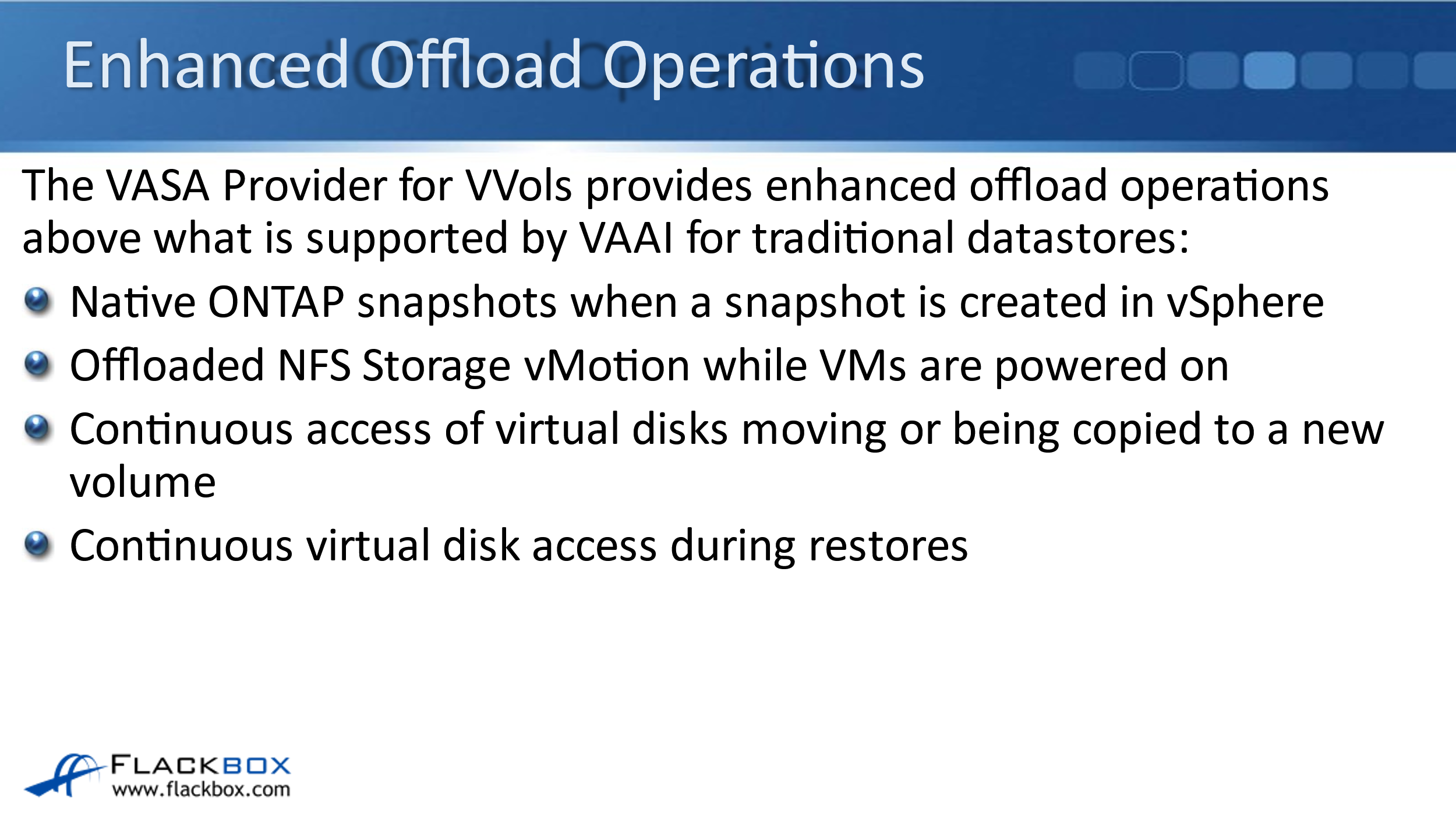 Final thing is to tell you about is OnCommand API services. The VASA dashboard and reports provide datastore and virtual machine level capacity and performance information. You must register OnCommand AP services with the VASA provider to enable them. 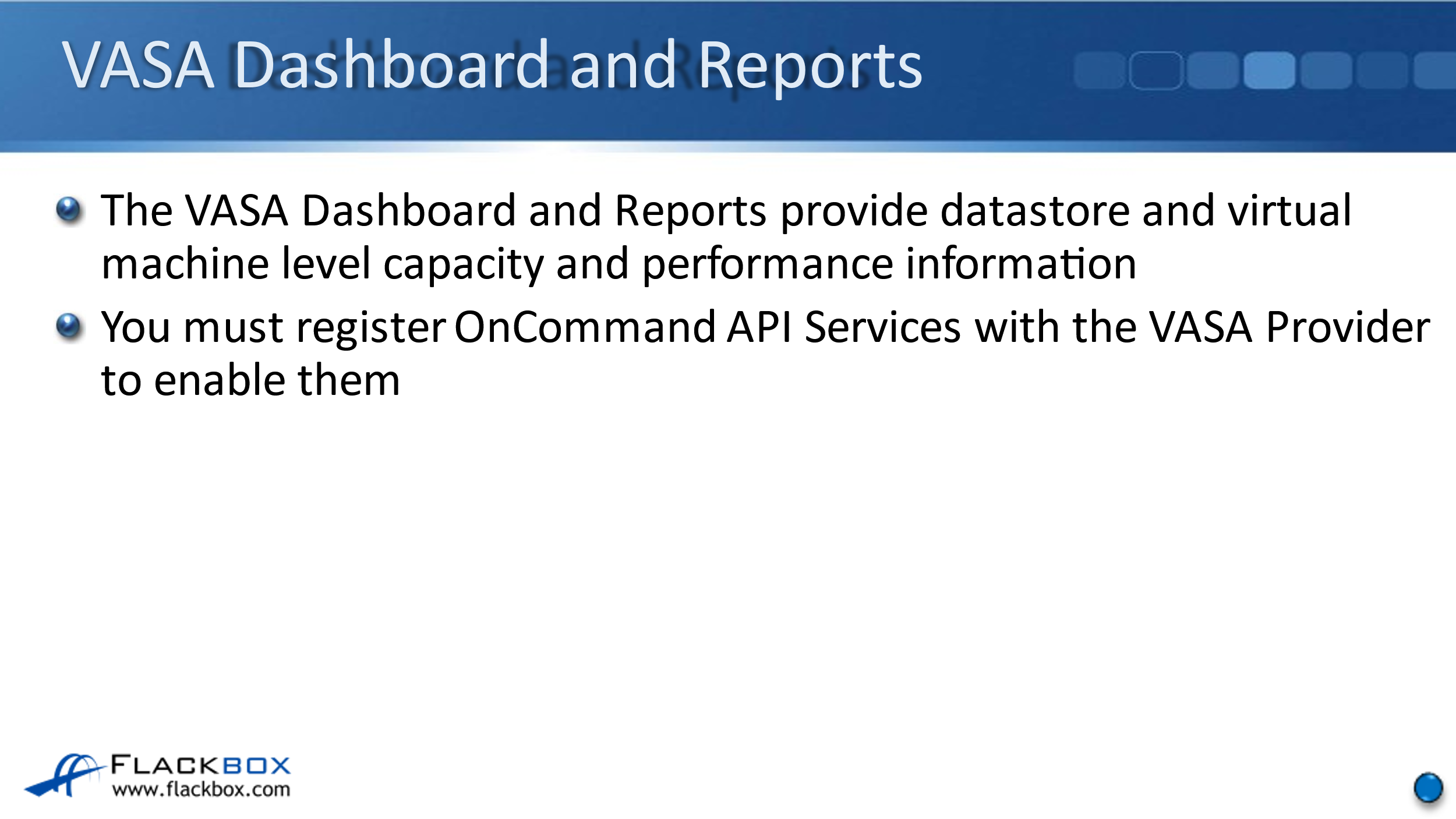 So to see the dashboard and reports, you also need to install OnCommand API services. That is separate downloadable software from a NetApp website, and that gets installed separately on a Linux host, which is probably going to be inside your VMware environment running as a virtual machine.