In this NetApp tutorial, you’ll learn how to do restores from snapshots, using either the ONTAP command line or doing it from client hosts. Scroll down for the video and also the text tutorials. 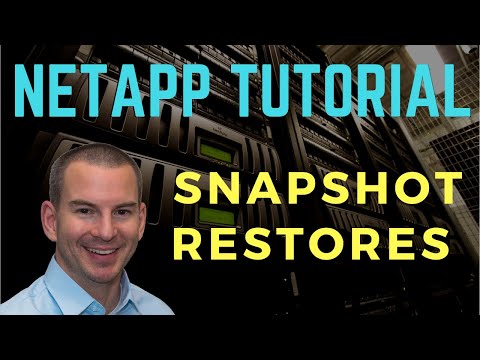 The considerations for enabling that or not, if a user does restore from a snapshot, they can actually end up overwriting newer information, which obviously could cause havoc if other people are working on the same shared file. So if you want to make sure that that doesn’t happen, then don’t give them the option.

But the flip side is that if you don’t give them the option, then whenever a user does want a restore, they’re going to have to raise a ticket for it. Then, one of the NetApp administrators will have to do it for them.

So if you don’t allow users to do their own restores, it will be more workload for you. If you allow them to do it, it’s going to take away some of your workloads, but you might have to fix things if a user makes a mistake.

The “showsnapshot” Share Property should also be set for CIFS shares, and it is not set by default. For Unix and Linux clients, you just need to make it visible on the volume, and they will be able to see the snapshot directory.

For Windows hosts to see the snapshot directory, you must enable it on the volume and the share level. It’s enabled by default on the volume, but it is not enabled by default in the share. So if you have set things up and go on a Windows host and cannot see the snapshot directory, the first thing to check is that you enabled it on the share.

Users can browse to the snapshot directory if you’ve enabled this. They can view and copy the old version of the file or folder and paste it into the same or a different location in the active file system.

Let’s say that you have got a file that you’ve got just one user is working on. They’ve made some edits, but we’re not happy with the edits, and they want to roll back to a previous version. They can do that by just restoring an older snapshot directly on top of the file’s current version. That will overwrite the current version and return to their old information again.

Another scenario is if you’ve got users working on a shared file where multiple users have been making some changes. Let’s say you’ve got user1 and user2. User2 has overwritten some changes that user1 made. User1 then wants to get those changes back, but they don’t want to overwrite the changes that were made by user2. So, you want to have two different versions of the file.

In that case, the user can browse to the snapshot directory and then copy the old version to a different location. Now you’ve got the two different versions, and the users can sort them out. They can make the edits, which keeps all of their changes from both users.

Restores from a client host use a copy operation. Let’s look and see what the client is actually going to see when they look in the volume and look at the Snapshot Directory. We’ll work through an example for that.

Here, we have got a volume which is called thinvol. A Linux user is accessing this, and they’re browsing through it. They can see that right now, in our example, there’s a directory inside the volume, which is called Directory1. There are also a couple of files in there called File1 and File2.

Here, the administrator has manually created a snapshot called manual1 that contains a point-in-time copy of the active file system. So what was in the active file system right now was a directory called Directory1 and the two files called File1 and File2. After that snapshot has been taken, if a user browses to the volume, this is what they will see if they expand the folders:

The next thing that happens is the user creates a new directory called Directory2 and puts a new file in there called File1. If they then expand the snapshot directory, they will see the manual snapshot that was taken by the administrator, named manual1.

They’ll see what was in the active file system at that time, Directory1, File1, and File2. Directory2 is not in any snapshot here because the snapshot was taken before Directory2 was created.

The next thing that happens is that now the administrator takes a second manual snapshot named manual2. If a user browses now to the snapshot directory, they will see the first snapshot, which was named as manual1, and what was in the active file system when that snapshot was taken, Directory1, File1, and File2.

They will also see the new snapshot, a separate directory for that, which is named manual2. In there, they will see Directory1 and its files, and Directory2 and its files as well.

The last thing to tell you here is about doing restores from snapshots using the ONTAP command line. To be able to do this, obviously, you need to be an administrator to be able to log on to the command line. If you do that, you can use SnapRestore.

Individual files, folders, or an entire volume can be restored when you use SnapRestore. If you are restoring from a client, you can restore files or folders, but you can’t restore the entire volume. If you want to do the entire volume, you need to do that from the command line.

Restores from SnapRestore revert the active file system by resetting the inode pointers. This is different than how it works when you’re doing a restore from a client. It’s quicker than and does not require the additional disk space used by the copy operation when restoring from a client host.

Some final considerations about snapshot restore operations when completing a volume restore with SnapRestore, all snapshots which are newer than the one used for the restore are deleted. So be careful, and make sure you’re restoring from the correct snapshot.

If you’re not sure, then start with the newer ones, and work your way back. Don’t go with the older one, because as soon as you’ve done that, you’ve lost all the newer snapshots. Restoring a file or folder, however, does not delete newer snapshots. This is just when you restore the volume.

Snapshot restore operations cannot be reversed. So once you’ve done it, there’s no option to roll back there. Now, if you had restored a file with a folder, and there was a newer snapshot, you could still revert to the newer snapshot. But if there’s no newer snapshot, and you revert back to a snapshot, then what was in the active file system is gone.

You’re back to what was in the snapshot now. Hopefully, you’ve got a backup in that case. If you have no backup, and you don’t have a newer snapshot, then you’ve lost whatever had changed since that snapshot that you restored.