In this NetApp tutorial, you’ll learn about tape backups and NDMP in ONTAP. Scroll down for the video and also text tutorial. 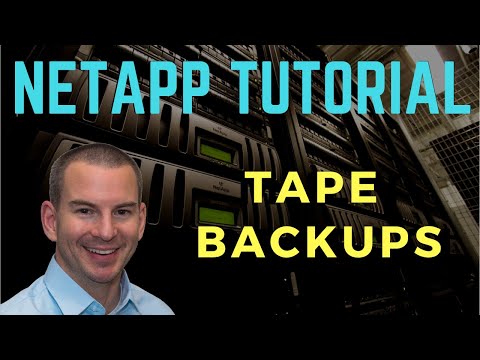 ONTAP does not have its own native tape backup application. You can use ‘smtape’ commands at the command line for SnapMirror or SnapVault tape seeding. However, you would not want to be configuring and running backup jobs manually using the command line every day.

Therefore, for your day-to-day tape backups, you’re going to want to use NDMP compliant backup software from a third-party vendor.

Let’s look at what software and what tape devices are available. If you search in Google for ‘backup to tape solutions’, you will find the Backup to Tape Solutions page by NetApp. There’s a tab here for NDMP certification because the backup software needs to be NDMP compliant.

On this page, you can see a list of currently supported backup applications. NetApp update this as new ones become available. In the overview tab, you can see there’s also a link where you can review a list of supported devices below.

If I open that up, it will open up the Interoperability Matrix Tool, then when this page opens, I’ll just search in the IMT. I’m going to search for ‘tape’ and add that to the list of things that I’m looking for. I can see tape drives on the right panel and then, click on the ‘Skip To Results’ button.

When this loads, it’s going to give me 12 pages of supported tape devices. You can see whether they’re attached via SAS or FC. That’s how you find out the latest compatible software and hardware devices.

The backup software that you’re going to use is going to come from a third party and it needs to be NDMP compliant. NDMP is the Network Data Management Protocol, it’s an open standard for backup software.

NDMP backup and restore commands are sent over an IP network from the backup server to the storage system. You’re going to have a backup server which is connected to your IP network and it’s going to send commands to the ONTAP system over that IP network to control the backups and the restores from tape.

We can have a look at how to configure the ONTAP side though. There are only a few commands that you need to enter.

NDMP authentication can be configured at the cluster and/or SVM level. The backup software is going to need to log into the ONTAP system to have permission to control the backups and restores. You’re going to have to authenticate it and it’s using NDMP for the connection to the storage system.

If you’re acting as a storage service provider for your own department, let’s say you’ve got department A and department B, and you want them to be able to manage their own backups and restores, then you can enable that at the SVM level.

Or maybe you’re a larger provider and you’ve got customers of Coke and Pepsi, and you want them to be able to manage their own backups and restores but not be able to see each other, you can enable that at the SVM level as well.

You can use those built in admin and vsadmin accounts, but better practice would be to use and create a dedicated account just for the backup with the correct permissions.

With Cluster Aware Backup (CAB), NDMP can back up any volume on any node and use any tape device connected to any node in the entire cluster. That was not the case with the old, now deprecated, node-scoped NDMP, which was supported in previous versions.

The data LIFs used for incoming connections from the backup software should not have failover enabled because if a LIF fails over during a backup or restore, it will fail. You should create dedicated LIFs for your backup software. They can still be homed on the same underlying physical port that’s used for other connections, such as client data access.

The backups do not traverse junctions, you must list every volume to be backed up. Say if you’re going to back up an entire SVM, you can’t just point the backup software at the SVM root volume. You have to point it at each volume in that SVM that you want it to back up.

In the example below, we’ve got our backup server, which is connected to the ONTAP system over the IP network and it’s sending in the backup commands. The volume that is being backed up in this example is located on Node 1, and the tape device is also attached to Node 1. That would be local NDMP backup.

The next type we have is remote NDMP. With remote NDMP, data is transported from the storage system to the backup server. The server is attached to a tape device and backs up the data there.

The ndmpcopy command has nothing to do with tape backup, but because we’ve been talking about NDMP so much in this tutorial, I want to tell you about ndmpcopy here. Just remember, it’s not really just about tape backup, this is for a different task.

With ndmpcopy, both full and incremental data transfers can be performed. You can transfer full or partial volumes, qtrees, directories, or individual files. Using the ndmpcopy command at the command line, you can move data around at the file level.

The difference between volcopy and volmove and ndmpcopy is that ndmpcopy works at the file level. It’s more granular, you can use it to move individual files and folders around.

However, for volcopy and volmove, they work at the block level so they’re faster. They’re not as granular as ndmpcopy though. You can run ndmpcopy at the command line of the source or destination storage systems, or on an external storage system.

Now, let’s look at the NDMP commands that we need to configure on the ONTAP storage system when we’re using tape backup and we want to have our storage system integrated with our external third party backup software.

In the command line interface, the first thing is that NDMP needs to be an allowed protocol on the vserver. To see what vservers we’ve got and what protocols are allowed, I will do a:

I’ve already got an SVM set up called NAS, and currently the allowed protocols are NFS and CIFS, so I need to allow NDMP on there. I also need to say it is for vserver, NAS which is my vserver name.

The command for that is:

For configuring NDMP for the integration with the backup software, it is the ‘vserver services ndmp’ commands that we use. Let’s see what commands are available. After the command, hit the question mark key and you can see the different main commands:

Let’s look at some of these commands starting with the version:

Now, I can see that the NDMP version is version 4, therefore, you need to use compliant NDMP backup software which supports version 4.

Next, I will do show:

Next, let’s turn NDMP on for the vserver NAS. I will say:

The other thing that I need to do is to generate a password for NDMP for the account that I’m going to be logging in to the ONTAP storage system from the backup software. The command is:

I hit enter and you see that it automatically generates a password for me. This is the password that you need to configure on your backup software, along with the user account that it’s going to use to log into the SVM and be able to control its backups and restores.