In this NetApp tutorial, you’ll learn what ONTAP Snapshots are and how they work. Scroll down for the video and also text tutorial. 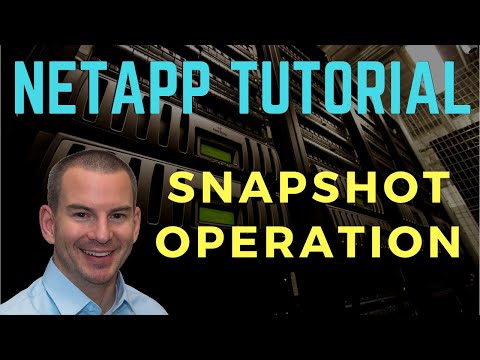 Snapshots are used for very fast and very convenient, short term backups. Individual files, folders, or the entire volume can be quickly and conveniently restored by the storage administrator or by end users if you enable the option to allow them to do that.

They’re configured and maintained at the volume level and different volumes can have different snapshot settings, for example, how often we take each snapshot.

For our day-to-day running of the system, our snapshots are going to be managed at the volume level, but aggregate level snapshots are also supported.

These are required for SyncMirror and MetroCluster, and they can be used by NetApp technical support to restore data if the aggregate file system becomes inconsistent. It is highly unlikely that that would ever happen, but if it does it’s possible for technical support to possibly restore that from an aggregate level snapshot.

When the snapshot is taken, it does not back up the data by copying it to new blocks on disk. It doesn’t take up double the amount of blocks. The way it does work is it consists of pointers to the blocks on disk that were in the volume at the time that the snapshot was taken.

Because it’s not copying data to new blocks on disk and just taking a pointer, the snapshot is nearly instantaneous. It’s not taking time to actually copy it and move it into a new location, so it’s nearly instantaneous. Also, it does not initially take up any space on disk, apart from a root inode index file.

It just got pointers and it’s just an index of what was on disk. It doesn’t actually copy it to a new location. That index takes up practically no space, it’s about 4 kilobytes in size. When you first take a snapshot, it basically doesn’t take up any space and it’s basically instantaneous.

As for the active file system changes, however, blocks which would have been removed from it could be locked by a snapshot. The snapshot, therefore, starts to take up space over time.

The snapshot is saved in the volume that it is taken off, so if you lose the volume, you lose the snapshots of the volume to. Snapshots initially take up no space, but they do grow over time, so because of those two characteristics of snapshots they’re used for short term convenient backups and restores.

They do not replace a long-term offsite backup strategy. This is because the snapshot is saved in the actual volume that it’s a snapshot of. So, say that you have a fire in the building or some other natural disaster, and you physically lose that volume. Well, you’ve lost all the snapshots of it as well.

However, snapshots do not give you that capability. Snapshots are not a complete backup strategy, they’re used just for short term backups. For your long-term backups, you’re going to need an offsite backup.

Backup the data to an external location. You can use SnapVault or you can use tape for that. Another reason that they’re not a long-term backup solution is that the snapshots start to take up space over time. If you left them there for a long time, they’re going to start taking up all the space in your volume, and we don’t want to do that.

Typically, we’re going to automatically delete snapshots as they reach a certain age, so we’re only going to have short term snapshots kept in the volume. Therefore, they’re not going to take up too much space.

Snapshots can be taken manually on demand, so if you knew that some changes were going to occur, you could quickly take a snapshot as a backup before those changes happened. Snapshots can also be taken automatically based on a schedule, and that’s the most common way for snapshots to occur.

Let’s look at an example of how snapshots work. Here we have got a volume and somebody has written some data to it. It contains the blocks A, B, and C. The active file system (AFS), that’s what’s in the volume right now, is blocks A, B and C.

Next up, blocks A and D are deleted from the active file system, and block E is created. A user has edited the files that are in that volume. They’ve ended up deleting blocks A and D, and creating block E.

The next thing that happens is we take another snapshot, that is our T2 snapshot. Again, it’s pointers to whatever is in the active file system right now, that is blocks B, C and E.

Then, block E is deleted from the active file system.

Let’s look and see where we are at right now. The point in time that we stopped with the example, block A is locked by the T0 and the T1 snapshots. It’s no longer in the active file system.

Block D is locked just by snapshot T1 and block E is locked by the T2 snapshot. Blocks A, D and E would be deleted if we didn’t have snapshots.

If we didn’t have any snapshots, they would be deleted and not taking up space. But because they are contained in snapshots, those blocks are not actually deleted, they’re not freed up on the disk, so you can see that the snapshots are taking up the space of blocks A, D and E.

If we wanted block A to be deleted, we would need to delete the T0 and the T1 snapshots, because they are both locking block A. If we deleted the T0 snapshot on its own, that would not free up any disk space, because everything that is being locked by T0 is also being locked by something else as well.

To see exactly how much space your snapshots are taking up, and how much space would be freed up if you deleted a snapshot, there are tools available, such as the space reclaimable command.