In this NetApp tutorial, you’ll learn how snapshot schedules and policies work. The ONTAP cluster takes scheduled snapshots of NAS volumes by default, now, you’re going to learn how those schedules work. Scroll down for the video and also text tutorial. 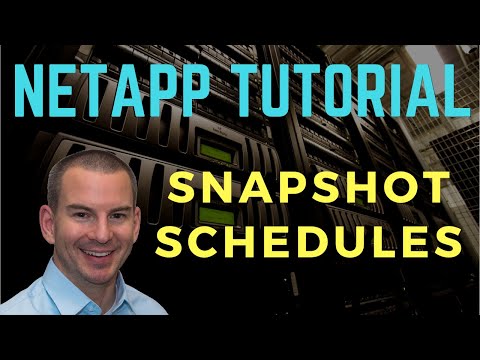 The ONTAP cluster does not take scheduled snapshots of SAN volumes by default because we want those to be managed with Client Integration. Best practice is to use SnapCenter to take consistent snapshots for SAN protocols.

You could apply a schedule to a volume being used for a SAN protocol, but it’s best practice not to do that. You should use SnapCenter instead.

The default schedule for NAS volumes takes a combination of hourly, daily, and weekly snapshots and retains 10 snapshots. After the first 10 snapshots are taken, the oldest snapshot is deleted whenever a new snapshot is taken. So, a total of 10 scheduled snapshots is always maintained. It’s always going to be 10 snapshots, which are going back to the same amount of time.

Let’s look at the default snapshot policy now. To do that, I’ve entered the command:

Looking at when those actually occur, we can do that by using the command:

With the default snapshot schedule, it’s going to have snapshots going back up to two weeks in time. Let’s have a look at creating a custom schedule now. To do that, the command is:

To verify this, we can do:

This will show us all of our available job schedules. All the rest that you see here are there by default anyway, and I’ve added my custom one, which is demo, and you can see there it’s verified that it occurs at five past 8:00 in the morning, five past midday, five past 4:00 PM and five past 8:00 PM.

When you configure this, you use 24-hour format. We’ve created our schedule and you can see it verified there.

The next step, let’s actually create a policy from this. To do that, I’ve said:

This works at Vserver level, so here I’ve said it’s for Vserver Department A. Then give the policy a name, I’ve named my policy, demo. I called my schedule, demo. Here I’m also calling my policy, demo, as well. It’s fine, you can name them both the same, it doesn’t cause a conflict.

I also have to say, -enabled true, and then I say schedule1 is demo and count1 4. So, count1 and schedule1 are tied together and this is seeing that it is going to take a snapshot occurring to the demo schedule, that is at five past 8:00 in the morning, five past 12:00, five past 4:00 PM, and five past 8:00 PM. It’s going to keep the most recent four copies of those.

It’s also going to take snapshots every day at 10 minutes past midnight, every day, and will keep the most recent two copies of those.

Another example, it’s Wednesday on the 14th of December, 2019. This is using USD format and it’s 4:00 PM. You saw on our schedule with the first snapshot, it’s going to take place at five past 4:00. And the name of the snapshot is going to be the name of the policy, which was demo.

The next snapshot was scheduled to take place at five past 8:00, so we’ll take another demo snapshot then.

The next snapshot occurs on Thursday morning at five past 8:00.

The next one is on Thursday at five past midday. Remember, we were going to retain the four most recent demo snapshots where we’ve got four demo snapshots now.

The next time we take a snapshot is at five past 4:00 on Thursday. Because we always retain the four most recent ones, when we take that snapshot, we delete the oldest one. We’ve now still got four most recent demo snapshots.

We then take another snapshot, the daily snapshot at 10 past midnight. At this point, we’ve got two dailies and we were going to retain two dailies. The next time we take a daily, we will delete the oldest daily.

Then we take another snapshot, a demo at five past 8:00 on Friday morning. Delete the oldest demo snapshot.

We take another snapshot at five past 12:00, again, delete the oldest one. We’re always retaining four demo snapshots.

Then, we have our daily on Saturday at 10 past midnight, and we delete the oldest daily because we’re retaining the two most recent dailies.

The next snapshot would be on Saturday morning at five past 8:00. Again, we will delete the oldest demo snapshot then.

Whenever we take a new one, we delete the oldest one. You can see that because we always have the six most recent, the amount of space that the snapshots are going to take up is going to stay pretty much the same over time.

Now, it will fluctuate a little bit depending on how much the Earth is changing and the volume over the particular days and weeks, but it will remain relatively constant.