NetApp SnapMirror Fan In, Fan Out, and Cascades

In this NetApp tutorial, you’ll learn about SnapMirror Engine fan in, fan out, and cascades. Scroll down for the video and also text tutorial.

NetApp SnapMirror Fan In, Fan Out, and Cascades Video Tutorial 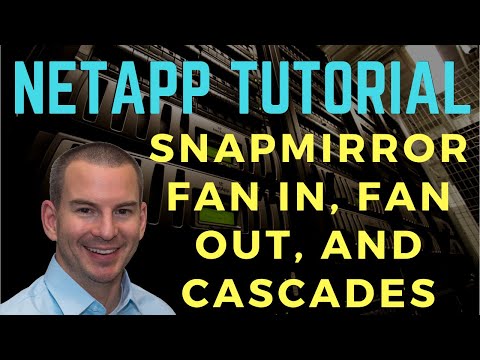 With fan in, you can replicate multiple source volumes from the same or different SVMs into multiple different destination volumes on the same SVM. That is fan in to the same SVM.

You can fan out to up to eight destination volumes from a single source volume for data protection on SnapVault mirror relationships. A source volume can have a maximum of one load sharing mirror copy per node in its cluster. You would never want to have more than one copy per node anyway, so that’s really not a limitation.

The replication schedule is the same for all of those destinations. Whenever you’ve got a load shedding mirror for a source, it replicates out to all its destinations at the same time. However, each data protection and SnapVault destination is configured independently and they can have different schedules.

Looking at some examples of fan out, the first one here, we’ve got the same source volume and we are replicating it to a destination volume. We’re also replicating it to a different destination volume. You could do this to get additional redundancy. It could be that this top cluster is in one location and the bottom cluster is in a different location.

The top example we have is SnapMirror. In the bottom example, we’re using SnapMirror to a destination volume. That would be in one cluster. The SnapVault would be going out to a different cluster.

If you want it to do SnapMirror and SnapVault out to the same cluster, it would be better to do that to the same destination volume and use unified replication there. That would give you space savings and also cut down on the amount of bandwidth required.

The reason you would want to do this would be for additional redundancy. Rather than having one backup copy, we’ve got two different backup copies there. Another reason to do this would be if you’re doing SnapMirror to multiple different sites to get the read-only load balancing there. You could do that with fan out and you could also do it with a cascade.

Obviously, you wouldn’t have a cascade where you had synchronous on one side and then synchronous on the other side. That would just not be possible because of the time delay there.