In this NetApp training tutorial, you’ll learn about inline and postprocess storage efficiency operations. I’ll explain what the default settings are on both AFF and FAS systems and how they differ. Moreover, I’ll also explain the various caveats about what can be configured where. Scroll down for the video and also text tutorials. 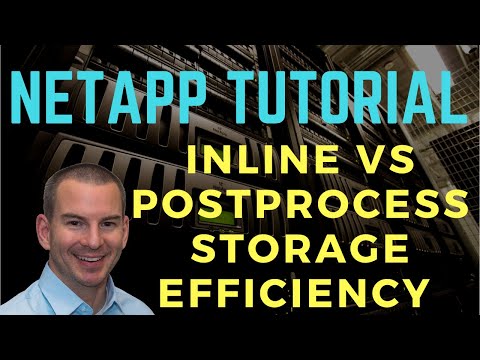 Looking at the effects that wherever you’re using inline and-or postprocess can have, inline operations can reduce writes to desk prolonging the life of SSDs. Because you’re squeezing the data in a smaller amount of physical space, that’s lesser writes going to the SSDs and giving them a longer life.

They also increase parallelism because they’re multiprocessor-capable. They take place while data is still in memory before being written to disk. Therefore, they’re best suited to faster controllers, basically meaning the AFF.

Inline operations can increase latency when using each HDDs. You can enable inline operations on FAS systems, but it’s generally not a good idea. If you are thinking of doing it, you must conduct a performance testing.

Storage efficiency is great because it means that you can fit the same data into less physical space. You get cost savings there, but you also need to be careful that it’s not going to cause performance degradation.

When you configure it in the command line, the first thing that you do is enable postprocess deduplication. Then you can then enable the other storage efficiency features.

Another caveat, storage efficiency is not supported on a volume which has been configured as semi-thick provisioned with the -space-slo semi-thick option. One of the requirements for overwrite guarantee for our LUNs is that deduplication and compression are turned off.

The volumes in an aggregate must all be thin provisioned for aggregate level inline deduplication to be enabled on your AFF systems.

Inline and Postprocess Compression on FAS

It’s the same on the AFF, you have to turn on postprocess compassion first, but that will actually just be skipped. It won’t actually be run. It’s only the inline compression that will be run.

Compaction is an inline only operation. We don’t have postprocess for that. It occurs during the consistency point after inline compression and the deduplication. Compaction runs are the volume level and volumes must be thin provisioned for compaction to be enabled.

Compaction is enabled by default on AFF. You can also enable it on FAS systems.

Let’s look at those defaults starting with the AFF and the default inline operation:

1. The first thing that happens is inline zero block deduplication. So basically, empty blocks will be deduplicated.

2. Next up is inline adaptive compression. If you remember when we covered compression earlier, we’ve got adoptive and secondary compression. Adaptive is better suited for AFF systems, so that is the default here.

4. Finally, we have inline data compaction. Inline deduplicated blocks are not compacted.

Those are all the inline operations and that is the order that they are processed in as well. You can see that deduplication, compression, and compaction are all enabled inline by default on the AFF.

Postprocess deduplication is enabled by default on AFF systems as well. The operation is triggered automatically when a large enough percentage of a change log has been populated.

On the AFF, only inline compression is supported, and compaction is an inline operation. Thus, the only postprocess operation that happens in the AFF is the duplication by default.

Next up, looking at the defaults on the FAS. Deduplication, compression, and compaction are disabled by default on FAS systems.

As I was saying earlier, this is because you want to check the impact it’ll have on performance before you run them. Volume-level deduplication, compression, and compaction can all be enabled on FAS.

Now, let’s have a look at how everything works for storage efficiency in a bit more detail. You can run postprocess deduplication and data compression operations by specifying a threshold percentage that waits for new data to exceed the specified percentage which is 20% by default.

The default that happens in the AFF systems is that after 20% of new data is written to the volume since the last operation, it will run again. You can also enable that on the FAS systems as well.

The other way that you can run your scans is at a scheduled time. You can set a maximum time period for it to run in as well. Finally, you can also run the operations manually on demand for your deduplication and compression.

The last thing to tell you is that storage efficiency applies to new data after it is enabled. This is important. If you’ve got an existing volume which has already got data in there and you didn’t turn on storage efficiency when you first created the volume, the existing data that is already there is not going to be deduplicated and compressed by default.

However, you can manually scan that existing data which is in the volume. Storage efficiency must be enabled to perform a manual scan.