In this SAN and NAS Storage tutorial, I cover the redundancy options available for Fibre Channel, and how clients can choose the paths to their storage through multipathing. Scroll down for the video and also text tutorial. 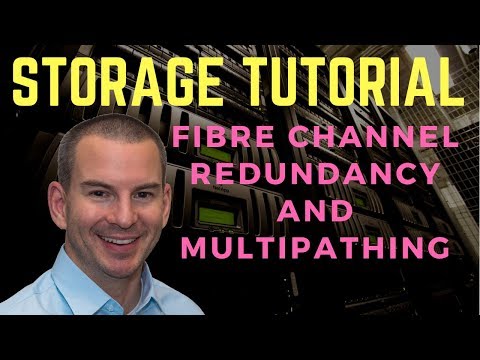 This post is the final part in the Fibre Channel SAN Overview series, you can read the previous parts by clicking on the links below:

Servers’ access to their storage will invariably be mission critical for the enterprise, so we’re not going to want to have any single points of failure. Redundant Fibre Channel networks should be put in place, known as Fabric A and Fabric B, or SAN A and SAN B. Each server and storage system host should be connected to both fabrics with redundant HBA ports.

Fibre Channel switches distribute shared information to each other, such as domain IDs, the FCNS database, and zoning. When we configure zoning in a fabric, we only need to do it on one switch, and it will then be automatically distributed to the other switches from there. This makes things more convenient for us, but there’s also a potential downside here as well, because if we make a misconfiguration it’s going to be replicated between all the switches in the fabric. If an error in Fabric A was able to propagate to Fabric B, this would bring down both fabrics, and it would drop the server’s connection to their storage. This would be disastrous.

In Fibre Channel networks, we have two fabrics, Fabric A and Fabric B. End hosts (including the storage system) are connected to both fabrics, but the switches are not. Switches are dedicated to either Fabric A or Fabric B.

The two fabrics are kept strictly physically separate from each other which is signified by the big red line up the middle of the diagram. Hosts are connected to both fabrics, but the fabrics are kept physically separate from each other. This means that if I have a misconfiguration in Fabric A, Fabric A could go down, but that misconfiguration cannot be propagated to Fabric B. My server would lose connectivity to its storage over Fabric A, but it can still get there over Fabric B so we don’t have a complete outage.

Okay, but wait. We’re going to have at least two controllers for redundancy of our storage system, so our network topology is actually going to look more like the diagram below.

I then tie it all together into a zone set. I’ve named my zone set Zoneset-A and it includes zone members Server1 and Server2. I configure that on one of the two Fabric A switches, and it will propagate it to the other switch, which saves me having to do a duplicate configuration on both.

I then tie it all together in my Fabric B zone set. I create a zoneset named Zoneset-B which includes member zone Server1 and Server2. I configure that on one of the two Fabric B switches, and it will propagate it to the other Fabric B switch. That takes care of my zoning on my switches.

As well as configuring zoning on the switches, I also need to configure LUN masking on the storage system.

For the Server 2 boot LUN, I do the same thing. I configure the members of its LUN Masking group to be the WWPN aliases Server 2-A and Server 2-B.

In the example below, ports Controller 1-A, Controller 1-B, Controller 2-A, and Controller 2-B are added to a Target Portal Group. Each of those ports will have its own unique WWPN which is in the TPG, and the hosts will learn that they can connect to their storage through any of them.

Let’s look at how this is going to work. We’ve got the same example we were looking at earlier, where I’ve got a storage system which is made up of two nodes, Controller 1 and Controller 2. Controller 1 owns the disks where the LUN for Server 1 is currently located.

Server 1 can get to its LUN through either Controller 1 or Controller 2, but it would be better for it to go to Controller 1 because that is a direct path. The storage system can give the server all of this information, let it know all of the paths that it can take to get there, and which are the preferred paths. It uses ALUA to do that.

Server 1 learns about Optimized Path 1, which is going through Fabric A and terminates on HBA Controller 1-A.

It also learns about Optimized Path 2, which is going through Fabric B and which terminates on HBA Controller 1-B.

Path 1 and Path 2 are optimized paths because they go to Controller 1, which is where the LUN is.

The server will also learn about Non-Optimized Path 3, which goes through Fabric A and terminates on the HBA Controller 2-A.

And Non-Optimized Path 4, which goes through Fabric B and which terminates on Controller 2-B.

The server has four different paths that it can take to get to its storage, and two of them are better optimized paths.

During the login process, initiators will detect ports available to connect to their storage on in the Target Portal Group, and ALUA will notify which are the preferred paths.

Multipathing software on the initiator will choose the path or paths to take to the storage. All popular operating systems (all flavors of Windows, Unix, Linux, VMware etc.) have multipathing software which supports active/active or active/standby paths. The client will automatically fail over to an alternate path if the one it is using fails.

Popular manufacturers for HBAs are Emulex and Qlogic, and they both have their own multipathing software which is installed and configured on the client.

As you’ve seen, client connectivity to SAN storage is fundamentally different to how Ethernet networking works. I already had a lot of experience in Ethernet networking before I learned storage, and I found this pretty amazing. In Ethernet, if you want to connect a client to a server, you have to point the client at the server’s IP address. With Fibre Channel, because of the login process, the client will automagically detect its LUNs.

In Ethernet networking, all the routing and switching decisions are handled by network infrastructure devices. In SAN storage, multipathing intelligence is enabled on the client end host.