In this SAN and NAS Storage tutorial, I cover Fibre Channel security through the use of zoning and LUN masking.  Scroll down for the video and also text tutorial. 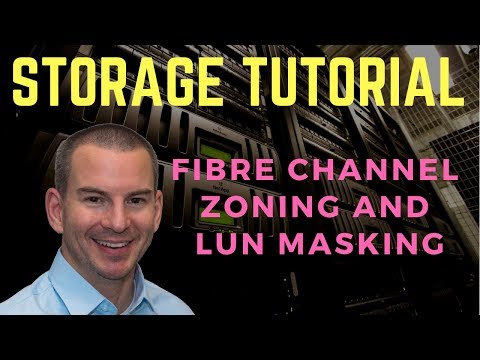 Popular manufacturers of Fibre Channel switches are Cisco and Brocade. The example below is for a Cisco switch, but Brocade uses a similar configuration.

In the example, I’ve got a couple of servers down at the bottom of the diagram which are clients of the storage system up at the top. Aliases are used to map the long WWPN name to a more convenient alias name chosen by the administrator. I’ve configured aliases on my Fibre Channel switch for the WWPNs on the servers and on the storage system.

Then, I group all of those zones together into a zone set and apply that on the switch. I’ve named the zoneset MY-ZONESET, and it includes zones SERVER1 and SERVER2.

Note: This is a simple example to make initial learning easier. Typically we’ll have at least two storage controllers and switches for redundancy. Please see the final part 3 of this series where I cover redundant fabrics for a more realistic example of how zoning is configured in real world deployments.

As well as configuring zoning on our switches, we also need to configure LUN masking on the storage system. It’s critical that the right LUN is presented to the right host. If the wrong host was able to connect to a LUN then it would be liable to corrupt it.

The next thing to talk about is Switch Domain IDs. Each switch in in the fibre channel network will be assigned a unique Domain ID. The name can be a bit confusing, because if you’re like me, you’d think a Domain ID would be an ID number which represented the entire domain of switches, but it doesn’t mean that at all. The Domain ID is actually a unique ID for each individual switch in that fibre channel network.  The Domain ID is a value from 1 to 239 on both Cisco and Brocade switches.

Each switch learns about the other switches in the network and how to route to them, based on their Domain ID.

What to know before you create a LUN