In this cloud training tutorial, we’re going to cover the cloud service model, IaaS, Infrastructure as a Service. Scroll down for the video and text tutorial. 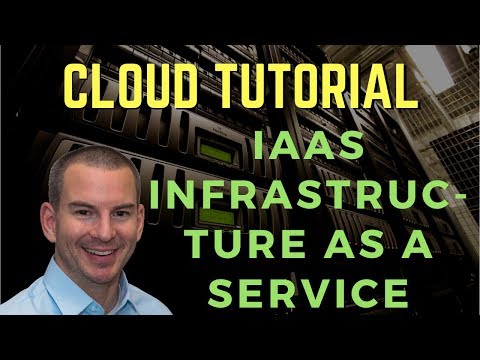 NIST defines IaaS as, “The capability provided to the consumer is to provision processing, storage, networks, and other fundamental computing resources where the consumer can deploy and run arbitrary software, which can include operating systems and applications.

The consumer does not manage or control the underlying cloud infrastructure but has control over operating systems, storage, and deployed applications; and possibly limited control of select networking components, for example, host firewalls.”

With IaaS, this is the service model that gives the customer the most control, they get access down at the operating system level.

Let’s have a look at that by looking at the data center stack. With IaaS, the provider will manage from the facility up to the hypervisor and the provider will also install the operating system and may patch it as well.

Let’s have a look and see how that works in AWS. I’ve logged into the Amazon Web Services console and clicked on the instances tab and you can see the virtual machine that I created earlier.

I’m going to click on the connect button and I’ll get a pop-up. The first thing that I need to do is to find out what the administrator password is because this is the first time I’m connecting to this virtual machine. I’ll click on the get password button and then I need to browse to the Key Pair that I downloaded earlier.

I’m going to copy that into my clipboard and the next thing I’m going to do is download the remote desktop file, which is going to make it easy for me to connect with RDP.

There’s a bit of a misconception where people think that if you’re on Infrastructure as a Service the cloud provider also has access to your machine so it’s not secure. That’s not that case at all, it’s a best practice that the first thing you do is change the administrator password and then it’s only you that has got access to the desktop of your virtual machines, the provider does not have any access at all. It is a secure solution.

Let’s have a look at the most well-known IaaS providers through the Gartner IaaS magic quadrant below. Gartner is a research company and they research who are the biggest players in cloud services amongst a whole heap of other things. We’ve got Amazon Web Services up here in the top right.

AWS is by far the biggest cloud provider. They’re currently bigger than all of their competitors combined, however, Microsoft Azure is gaining market share. They’ve been able to do that because it can be a very cost-effective option since pretty much all companies are Microsoft customers in some shape or form. They’re probably using Windows as their desktop operating system.

Because they’re already a Microsoft customer, they can get cheaper options for using Microsoft for cloud as well. AWS is still by far the biggest player with IaaS right now.

In the bottom section of the magic quadrant, you’ll see other well-known cloud services providers:

Different flavors are available for IAAS. Cloud providers will often offer three of these:

If you’re an IaaS customer, you don’t have to choose one of the three, you can mix and match between the three of them.

Typically, it’s going to have the least amount of options in terms of how many vCPUs, RAM and storage settings available for the virtual machine out of the three possible flavors. The virtual machines can usually be provisioned more quickly than dedicated options. These can usually be provisioned very quickly, typically in less than 15 minutes. Since it’s the least expensive option, this is also the most commonly deployed option of the three as well.

There are typically more options here in terms of how many vCPUs, RAM and storage options are available for that virtual machine. Since the customer has got dedicated hardware, they may be required to sign a minimum length contract for this, but not necessarily. It depends on a particular cloud provider.

The last of the three options is the dedicated bare-metal servers. With these, a customer is given access to their physical server down at the lower server level.

A hypervisor is not installed and managed by the cloud provider. The customer can either install an operating system directly on the server or they can install and manage their own hypervisor.

This is the most expensive option of the three and it typically has the most options in terms of virtual CPUs, RAM and storage options that are available. Again, the customer may be required to sign a minimum length contract. AWS, who is the biggest cloud IaaS provider does not offer this option. With AWS, you only get the first two options currently. You can’t get a dedicated bare-metal server with them.

Looking at the data center stack where the provider is going to look after and where the customer gets in:

The operating system is not even installed yet, so the customer will get access using some kind of management application like IPMI or Lights Out, down to the physical server and they will be able to install the operating system from there.

The hypervisor is optional, maybe they have a hypervisor or maybe the OS is installed directly on the hardware. If the customer wanted to run just one workload on that particular physical server, let’s say they’re going to run an Oracle database and they want to have a high-performance server, then the Oracle database is going to be the only thing running on the server.

One reason a customer may prefer virtual machines on dedicated physical servers is if they do not have expertise in-house to manage the hypervisor. In dedicated bare-metal servers, running a hypervisor will require them to install it and manage it themselves. Therefore, they’ll need their staff with expertise in that area.

With virtual machines on dedicated servers, the provider is going to install and manage the hypervisor for them. They will just choose the operating system they want when they spin up the virtual machine and they get in at that level. That’s the better option if they don’t have IT staff who have got expertise in server virtualization.

Customers can also be offered options for shared or dedicated network infrastructure appliances like firewalls and load balancers.

Again, it depends on the particular cloud provider if they’re going to offer those options or not. Customers can typically connect into the cloud providers’ data center over the internet and/or via a direct network connection.

With the storage options, the customer will typically have the option of local hard drives in the:

The customer also has the option of managing their own storage operating system on a virtual machine or bare-metal server.

The customer can manage their servers to install applications, patches, etc., through standard remote management methods such as:

API is also typically available to allow for automation of common tasks, such as provisioning a new virtual machine.

The customer may also have the option of applications such as Microsoft SQL or antivirus. For the installation of the application, they can either:

What I’m talking about here is when the customer gets in at the operating system level and they want to run SQL Server on their virtual machine, they could install SQL Server themselves and they would have to provide the license.

If the provider provides this option, the provider can install SQL for them and then the customer just pays for the license as a monthly fee to the service provider rather than providing the license themselves.

The cloud provider may also offer to manage the application as well. They might have, in our example, SQL database administrators on the provider’s staff who can look after the database for the customer.

Let’s have a look at how the billing works with IaaS. For virtual machines on shared physical servers, the CPU and RAM will typically only be billed when the virtual machine is powered on.

The physical CPU and RAM in the underlying server hardware will be available for use by other customers when the virtual machine is powered off. The provider isn’t going to charge you as the customer for CPU and RAM usage when you’re not using it because you’ve powered the server off, so you can get some cost savings there.

Let’s have a look at some examples of billing. In AWS, let’s use AWS simple monthly calculator which is a tool that you can use to estimate what your monthly charge is going to be every month.

The first thing we do is up at the top we chose the region because there’s a slightly different charge for different regions. I will choose Singapore in here, and then under the Amazon EC2 Instances, you add your virtual machines that are on shared servers.

I’ll click on the plus button and then select the type. Let’s say that we have got a virtual machine which has four vCPU cores and 16GB of memory, that’s the type T2 extra-large in Amazon. I’ll select that, and close, and save.

You can see that the monthly fee for this server if I had it powered on 100% of the time, would be a little over $175. You can also select your other options here as well, for example, I also required 500 gigabytes of SSD storage. When I enter my additional storage, that cost will be added as well which was another $50 per month. Further down you can add all of the other options. So that’s how you can figure out your bill on AWS.

Let’s look at another example, we’ll have a look at Telstra’s pricing structure. I’ve opened up their pricing guide, which comes as a PDF.

Telstra is the main Telco in Australia and they also offer IaaS services. Telstra offers both virtual servers and dedicated servers. Let’s have a look at how the billing works for the virtual servers on shared underlying infrastructure.

They also have a pay as you go plan as well but you get a bit of a discount if you avail one of the monthly plans.

Now, I will show you the basics of how to do an IaaS design. The reason I’m going to do this is that if you are moving from purely On Premises to a Cloud solution, you can be tasked with doing the design.