In this Cisco CCNA tutorial, you’ll learn about the different types of WiFi networks that are available. Scroll down for the video and also text tutorials. 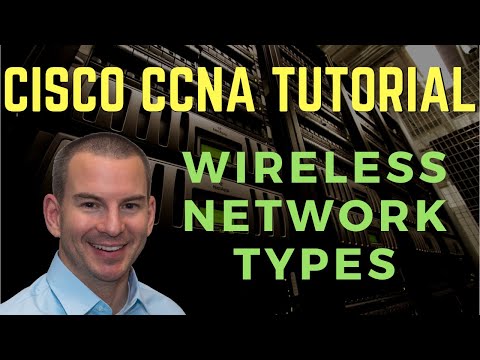 WiFi services are defined in the IEEE 802.11 standard, and IEEE stands for Institute of Electrical and Electronics Engineers.

The different wireless network types are as follows:

It is possible that the entire network, the entire building, your corporate office, and everybody is connecting wirelessly. But more likely, there is going to be a wired network there. A WLAN allows you to connect to that wired infrastructure without needing a wire or a cable. And the devices are within 100 meters of a wireless access point with a WLAN.

With Ad Hoc networks, two or more wireless stations communicate directly. Whenever you’ve got a device communicating on the wireless network, it’s known as a station.

That’s the scalability issue with Ad Hoc networks. So it only works for a Wireless Personal Area Network (WPAN), where the devices are very close to each other.

There are two laptops in the example below. When they’re communicating with each other or anything else, they will send frames to the wireless AP, and it’s a wireless AP that forwards those frames.

Notice that the wireless AP also has got its own coverage area. So how does this solve the scalability issue in Ad Hoc networks? Well, the first reason is the wireless AP can be connected to the wired network.

So this now gives your wireless devices access to that entire wired network and beyond. Multiple wireless access points can be deployed to get coverage across the entire area you want.

Now, wireless stations work in either Ad Hoc or infrastructure mode. They can’t operate in both at the same time.

So what if you’re in the corporate office, connected to the wireless LAN, but you also want to connect to a wireless monitor? Well, does that mean you can’t do it? The solution for this is WiFi Direct.

WiFi Direct allows devices to be connected to an access point, build an infrastructure mode, and be part of a peer-to-peer wireless network. But I thought I just said that you couldn’t have infrastructure more than Ad Hoc mode working at the same time.

However, WiFi Direct does not operate in Ad Hoc IBSS mode. It’s an extension to infrastructure mode. WiFi Protected Setup (WPS) enables connections setup by pushing a button. So it’s very easy to set up, and it’s a Wireless Personal Area Network (WPAN) because, for the peer-to-peer connection, the devices have to be close together.

The predefined services that are available with WiFi Direct are:

Wireless bridges can be used to connect areas that are not reachable via cable to the network. In the image below, over on the left, maybe this is your warehouse, and it’s impossible to get a wired connection from the main building.

Mesh networks are becoming very popular in home networks now. This is another option to spread the coverage area of a wireless LAN. One AP radio is used to serve clients, and the other radio in the AP connects to the backhaul network.

What is Wireless Network and What are its Types?: https://study-ccna.com/wireless-network-overview-types/