In this Cisco CCNA tutorial, you will learn about IOS configuration management, running configuration, and startup configuration. Scroll down for the video and also text tutorials. 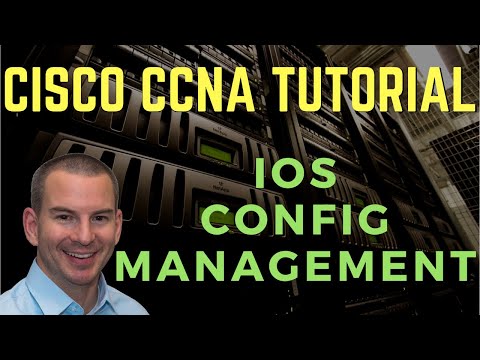 So in IOS, the change takes effect immediately whenever you make a change. When you make the change, it goes into the running configuration, which is the configuration that is in effect right now.

If I do a ‘show running-config’, the hostname is Router1. So if I now reloaded the router, it would come back, and the change would not have taken effect. It is deliberate because it allows you to back out of mistakes.

If I made some changes on the router and had some catastrophic changes but hadn’t saved it yet, the easiest thing to do is to just pull the router’s power and then plug it back in again. Boot it up, and it will come back with the configuration already on there before the changes.

Now, that’s a fairly drastic thing to do. It requires a reboot on the router. So you would only do that as a last resort.

It will take a few seconds to build the configuration, and I get the OK message telling me, “Yes, it’s being copied to the startup configuration.” So if I now do a ‘show startup-config’ command again, you’ll see that the hostname is now Router1. It’s permanent, and if I reboot the router now, it will come up with that as the configuration.

Next is how to back up your configurations. Cisco has tools like Cisco Prime Infrastructure that can be used to automate backups from a centralized server. You can also back up manually as well.

The way to do that is I’m going to copy the running configuration. I’ll hit the question mark ‘?’ now to see where I can copy it, and you’ll see one of the options here is flash, which is flash memory on the router.

So, the easiest way would be to copy the running configuration to a TFTP server. The command is ‘copy run tftp’. It will then ask for the IP address of the TFTP server. Let’s say this is at 10.10.10.10, and hit Enter.

Then, the name of the filename I want to use, let’s say I’m going to use ‘router1-config’ and hit Enter. It will then connect to the TFTP server and back up the configuration there as a text file.

Now, how do I check what the actual contents of my backup are? If it’s saved to flash, the way that you can do that is using the ‘more’ command. Enter the command ‘more flash:my-config’, and that will print out here the contents of that configuration file.

The last thing that I need to tell you here is where the different configuration files are stored. Now, for the device to boot up, it needs to initially load the IOS operating system image stored in Flash.