In this Cisco CCNA training tutorial, you’ll learn about ARP, what the Address Resolution Protocol is, how it works, and what are the commands to be used. Scroll down for the video and also text tutorial. 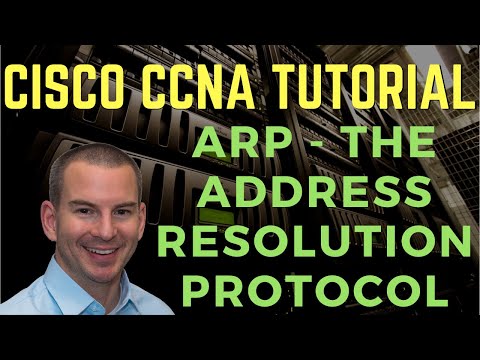 We’ll start by looking at how this fits into the OSI stack. So, we’ve got a sender on the left, it’s going to send some traffic to the receiver on the right. The sender will compose the packet, starting with the Layer 7 information, that’s the Application Layer.

It will then encapsulate that with Layer 6, the Presentation Layer header.

That will be encapsulated in the Session Layer header.

Then at Layer 4, with the Transport Layer header, it will include information, such as whether it’s TCP or UDP, and the port number.

That will then get encapsulated with the Layer 3 IP header, which includes the source and destination IP address.

Then it will be encapsulated in the Layer 2 Data-Link header, which includes the source and destination MAC address, and that will then get put onto the physical wire.

The sender can either send directly to an IP address or it can send to an FQDN. If it sends to that Fully Qualified Domain Name, then that will need to be resolved into the IP address using DNS.

Now, the IP address is a logical address, which is controlled by administrators. It makes sense that we can have that referenced in the application, either directly as the destination IP address or as the FQDN, which can be dissolved by DNS.

The MAC address, on the other hand, is not a logical address. We just have that great, big, flat global address space, so it’s not really possible either for the user to enter the destination MAC address themself or for it to be configured in the application.

In our example, the sender already knows that it wants to send traffic to IP address 172.23.4.2. It can compose the packet as far as the Layer 3 IP header, but it doesn’t know the receiver’s MAC address yet. It’s going to use ARP to find that out.

Obviously, the sender has to send it out everywhere because it doesn’t know what the intended destination’s MAC address is yet. That will come into the switch, the switch will see that it is broadcast traffic, so it will flood it at all ports.

It will hit everything plugged into that switch, including, in our example, the receiver on the right, which will process that ARP request.

The receiver knows exactly what to send it back to because that original MAC address of 1111.2222.3333 was in the ARP request. The switch will then send that ARP reply just out of Port 1, down to the original sender. That was unicast traffic and it’s for a known MAC address which is already in its MAC address table.

That is how ARP works when both of the hosts are on the same IP subnet. ARP replies are saved in a host ARP cache so that it doesn’t need to send an ARP request every time it wants to communicate with somebody else.

To view the ARP cache, we can do that on Windows with the arp -a command. On a Linux host, we use the arp -n command.

To flush the cache on Windows, we use the command:

To flush the cache on Linux, we use the command:

We wouldn’t normally do that, but if we were troubleshooting it or if the ARP cache had somehow got corrupted, that’s how we would clear it. 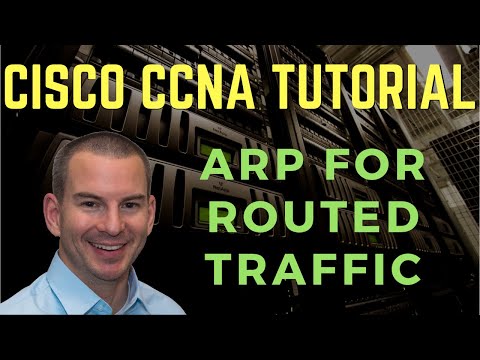 If I jump onto that Linux host, and I do an arp -n there, then I’ll see an entry for 172.23.4.2. Because I had some traffic between those two hosts, it’s got an entry in its ARP cache for that host IP address and its MAC address as well. That’s how ARP works when both hosts are in the same subnet.

You see the sender over there on the left, the receiver is on the right, and we’ve got a router that is going to route traffic between those two subnets.

We can’t have ARP working the way it did earlier when both hosts were on the same subnet. If the sender on the left sends out a normal ARP request for 192.168.10.1, that will go out as a Layer 2 broadcast, and it wouldn’t be forwarded by the router.

The ARP request would never get to the receiver. Also, we knew that when we send traffic between two different IP subnets, it has to be sent via a router. So, the sender is not going to send an ARP request for 192.168.10.1.

It knows not to do that because it compares its own IP address and subnet mask with the destination IP address, and it can see that it’s on a different IP subnet. So, the sender knows that it has to send the traffic via a router.

The sender will have been holding the IP packet that’s intended for the final destination while it sent out the original ARP request there. It now knows where to send it to for the destination MAC address, so it will now send that IP packet.

The ARP reply comes from its source MAC 2222.3333.4444, and it goes to the destination MAC of the router’s interface on the right-hand side there, which was 4444.5555.7777. The router now knows the MAC address of the final destination on the right, so it will send the IP packet.

The IP formation in the packet never changes. The source IP address is always the original sender, which is 172.23.4.1 in our example, and the destination IP is always the final destination address, which was 192.168.10.1.

If you want to view the ARP cache on a Cisco router, the command is:

To clear the ARP cache, the command is:

ARP requests use broadcast traffic so they are not forwarded by a router. R1 will have entries in its ARP cache for all hosts it has seen on its directly connected networks (10.10.10.0/24).

The ARP table on a Cisco router: https://study-ccna.com/the-arp-table-on-a-cisco-router/