In this Cisco CCNA tutorial, you’ll learn about the Spanning Tree terminology of bridges. This is going to just be a short lecture and I wanted to cover this before we get into the details of how Spanning Tree works. Scroll down to see the video and also text tutorial. 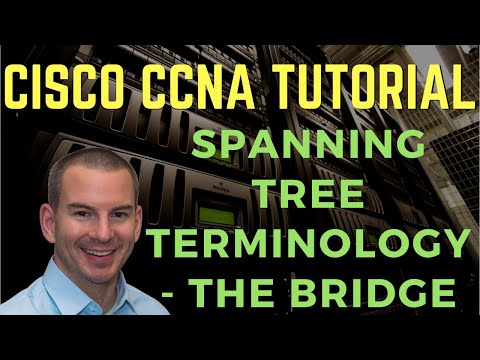 I just wanted to reach out and thank you personally for your CCNA course. I attended a boot camp and took the test once. I then bought your course a few weeks ago and honestly it puts everything you need to know in a very easy and understanding layout so thank you for helping me get my CCNA!
I tested yesterday and received a passing score, I could not have done it without your course.

Before we talk about the bridge, we need to talk about hubs. Hubs were Layer 1 only devices that performed the same function as switches, which is connecting Ethernet LAN hosts to the network.

Way back in the day we used hubs, but you can't even buy them anymore now. They've been replaced by switches. Hubs are Layer 1 devices so, they do not learn MAC addresses as switches do. They flooded all traffic out all parts apart from the one it was received on. Broadcast, unicast, and multicast traffic were flooded everywhere. Now, hubs have been replaced. We use switches instead, in modern networks. Switches provide performance and security improvements over hubs by forwarding traffic to known unicast MAC addresses out the relevant port rather than flooding it everywhere.

Early switches were expensive, had commonly only two ports, and they were called bridges. They segmented LANS which were built with hubs elsewhere.

If you have a look at the diagram below, you can see that the main part of our network is built with hubs where we've got all of our end hosts were plugged in. In between the two parts of the network that are built with hubs, we can put a bridge in there. The bridge is a Layer 2 device and it learns the MAC addresses on both sides. What a bridge did was, it segmented that large collision domain into two smaller collision domains.

Traffic would typically stay on one side of the bridge and only would move over if it had to move over because if the destination was on the other side. Bridges are basically switches, but they've only got around two parts in them.

When Layer 2 devices were first available before switches, we had bridges. So a switch is a multi-part bridge. Basically, a bridge and a switch are the same thing, just the switches are modern device and they've got more ports than bridges had. Again, just like hubs, you can't even buy bridges anymore.

Now, Spanning Tree was invented back when bridges were in use before switches were available so it uses the terminology of the bridge such as the Root Bridge and the Bridge Protocol Data Unit.